A Film By Arvind Review 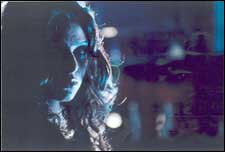 Himabindu Chitta / fullhyd.com
EDITOR RATING
6.0
Performances
Script
Music/Soundtrack
Visuals
NA
NA
NA
NA
Suggestions
Can watch again
NA
Good for kids
NA
Good for dates
NA
Wait for OTT
NA
Would you pay good money to have goose bumps? Would you willingly be chilled to the bone? Director Shekhar Suri is betting on it, with his many-layered psychological thriller, A Film By Arvind.

Arvind (Rajeev Kanakala), a rags-to-riches movie director, has struggled on the streets before tasting cinematic success. His friend Rishi (Rishi) has lived through the bad days with him, but is currently the reigning movie star, now that he has starred in Arvind's two superhit productions. Having found his footing, Arvind now wants to experiment a little with an offbeat script he lays his hands on.

This script, like the movie, starts out brilliantly; halfway through, however, Arvind finds that the ink is smudged on the rest of the pages. Maddened, he hunts for the author in vain. Rishi and Arvind decide to put their heads together on this script, and what better place to ponder than a thick forest in the middle of nowhere?

So while the twosome head for Arvind's forest cottage, the mystery script starts out exactly as they do, with two friends speeding down a highway. Just when the script has a girl entering the scene, a fine female specimen blocks the road, insisting that our gallivanting gentlemen give her a lift. Having dimwittedly caused a scuffle between Rishi and some goondas (this is also part of the script), Nirupama (Mona Chopra) seeks shelter for the night at their cottage.

Soon their lives begin to match the script scene for scene, and Arvind goes berserk. He tracks down the writer of the script, who helplessly informs him that Nirupama is a psychopathic killer and that Rishi is going to suffer a painful death at her hands.

In an eerily silent jungle, with a storm raging overhead, and a parchment that predicts your every move, it's tough not to surrender to teeth-chattering panic. Arvind tries and fails to convince Rishi that Nirupama is a psycho. But does he live to see daylight? Who is the real psycho? All this gore and plenty of blood-curdling screams await those with nerves of steel, at the nearest theater.

While the first half is well-paced and gives genuine creeps, the second half is simply non-existent. The lack of a compelling plot post-intermission is compensated for poorly by a constant horror-score in the background. Yeah, we're guessing this movie's script got smudged, too.

Inducing fear ain't nothing to be alarmed about when you use Ram Gopal Varma's tried-and-tested modus operandi, as Suri effectively has. But without a meaty plot, the ghouly ambience takes on a queerly comical, frivolous character. A Film By Arvind loses its crutches at just this crucial juncture, and thus gets you only halfway to scareville.
Share. Save. Connect.
Tweet
A FILM BY ARVIND SNAPSHOT

ADVERTISEMENT
This page was tagged for
a film by aravind psycho killer name
A Film By Arvind telugu movie
A Film By Arvind reviews
release date
Rajeev Kanakala, Rishi
Follow @fullhyderabad
Follow fullhyd.com on
About Hyderabad
The Hyderabad Community
Improve fullhyd.com
More
Our Other Local Guides
Our other sites
© Copyright 1999-2009 LRR Technologies (Hyderabad), Pvt Ltd. All rights reserved. fullhyd, fullhyderabad, Welcome To The Neighbourhood are trademarks of LRR Technologies (Hyderabad) Pvt Ltd. The textual, graphic, audio and audiovisual material in this site is protected by copyright law. You may not copy, distribute, or use this material except as necessary for your personal, non-commercial use. Any trademarks are the properties of their respective owners. More on Hyderabad, India. Jobs in Hyderabad.