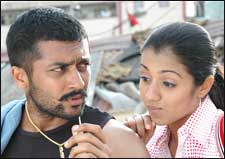 A still from Aaru
Aaru, a Telugu movie, is not currently screening in Hyderabad.
LATEST COMMENT
Ravi Varma on 17th Apr 2007, 1:26pm | Permalink
the movie sucks except for trisha.


If you're wondering why a person would be named something like Aaru, it's simple - it's because it's a small number. We mean, it would be quite hard to keep calling a person who is named Moodu Vela Rendu Vandala Dabbhai Nalugu. People will then anyway call him Moodu in short, defeating the whole purpose. Yes, his parents were no doubt quite far-sighted, and restricted it to a small number in the first place.

Anyway, Aaru (Surya) is the hands-on executive for Vishwanath (Ashish Vidyarthi), a land-grabbing real estate villain, and runs errands for his boss, like brea....

ADVERTISEMENT
This page was tagged for
Aaru telugu movie
Aaru reviews
release date
Surya, Trisha
theatres list
Follow @fullhyderabad
Follow fullhyd.com on
About Hyderabad
The Hyderabad Community
Improve fullhyd.com
More
Our Other Local Guides
Our other sites
© Copyright 1999-2009 LRR Technologies (Hyderabad), Pvt Ltd. All rights reserved. fullhyd, fullhyderabad, Welcome To The Neighbourhood are trademarks of LRR Technologies (Hyderabad) Pvt Ltd. The textual, graphic, audio and audiovisual material in this site is protected by copyright law. You may not copy, distribute, or use this material except as necessary for your personal, non-commercial use. Any trademarks are the properties of their respective owners. More on Hyderabad, India. Jobs in Hyderabad.