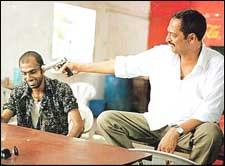 Deepa Menon / fullhyd.com
EDITOR RATING
7.5
Performances
Script
Music/Soundtrack
Visuals
NA
NA
NA
NA
Suggestions
Can watch again
NA
Good for kids
NA
Good for dates
NA
Wait to rent it
NA
Remember the last time we saw Nana Patekar on screen? He was ranting over something. It didn't take much to make him go ballistic, either - corrupt politicians, communal divide, mosquitoes, transvestites... he covered them all. We soon got tired of it, and so did he. Till one astute filmmaker discovered how to make Nana Patekar terrifying again - don't let him explode, just keep him tick-tick-ticking all through. And it works. Man, does it work.

You know the gist of it: trigger-happy cop who kills as unemotionally as a surgeon slices, and with equal precision. And the body-bags are piling up. Fifty-six deaths and counting. Sadhu Agashe is suddenly a celebrity of sorts, and the killer-cop has caught the fancy of every news-media in the country. Within his department, the Crime Branch, however, resentment against him is simmering.

Agashe's Department of Encounter Specialists is a place where orders to kill are given with alarming frequency, and obeyed with chilling promptness. Nobody questions their boss, and it's understood that when you're dealing with the dregs of society, you're bound to get your hands dirty. The cops have on their roll informers who range from petty car-thieves to the more seasoned criminals. Keeping your ear to the ground involves some degree of ethical flexibility. And no one gets this better than a cop.

Agashe's colleague and subordinate sees his senior's celebrated corpse tallying as some sort of contest, which makes him bitter but also eggs him on to try harder. During one encounter, however, this colleague's unfortunate tendency to jump the gun kills a civilian. Who happens to be the old bed-ridden mother of a dreaded underworld leader, Feroz.

Feroz escapes from custody and is stalking the city for revenge against Agashe, who he thinks is his mother's killer. And this is when it hits the ceiling. Agashe's wife is shot dead in a sniper attack, and it's obvious to everyone whodunnit. Guess what Agashe's next course of action will be? Hint, hint: do you think it will involve gunshots and pools of blood?

Feroz is part of a bigger web of crime, and Agashe gets hot on the trail of his associates. But by now, the cop's popularity has won him more than one enemy. The boss of the department has it in for Agashe from the start. But the boss makes - as the writers of crime-fiction are fond of putting it - his first big mistake when he refuses permission to track Feroz and his family. Agashe resigns and decides to go solo. This is bad news for everyone on his wrong side, starting with Feroz's associate, who is found with a bullet in his brain.

Now running from the cops and hunting for information on his wife's killer, Agashe has to resort to desperate means. One of his more precious, and persistently elusive, contacts is a mafia leader, Zameer, who resides in Dubai but operates on the streets of Mumbai. The head of Feroz's rival gang, Zameer takes a personal interest in Agashe's hunt for vengeance. So when Mumbai starts closing in on its errant cop, Zameer throws him a line and brings him to safety in his own house abroad. A deal is struck: inside info from the police dossiers in return for Feroz, whose death Agashe is keen on supervising personally.

He gets his revenge in the end, just like you knew he would. But it would be a crime to tell you how he does this. All of this movie's appeal lies in how it's told. There's going to be some talk on how Ab Tak Chappan glamorizes violence and desensitizes our young viewers. True, the movie is a sensationalist shoot-em-up, but it doesn't pretend to be anything else. And it does such a bang-up job of telling you a fully entertaining story. Everything from the camera work to the dialogue is taut and there's not one unnecessary sequence in the entire flick.

This is one to watch, people. Not in the recent past has a movie so completely outshone its 70mm trailers.

ADVERTISEMENT
This page was tagged for
Ab Tak 56 hindi movie
Ab Tak 56 reviews
release date
Nana Patekar, Revati
theatres list
Follow @fullhyderabad
Follow fullhyd.com on
About Hyderabad
The Hyderabad Community
Improve fullhyd.com
More
Our Other Local Guides
Our other sites
© Copyright 1999-2009 LRR Technologies (Hyderabad), Pvt Ltd. All rights reserved. fullhyd, fullhyderabad, Welcome To The Neighbourhood are trademarks of LRR Technologies (Hyderabad) Pvt Ltd. The textual, graphic, audio and audiovisual material in this site is protected by copyright law. You may not copy, distribute, or use this material except as necessary for your personal, non-commercial use. Any trademarks are the properties of their respective owners. More on Hyderabad, India. Jobs in Hyderabad.