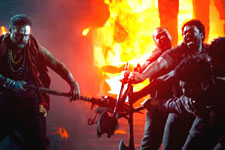 T J Reddy / fullhyd.com
EDITOR RATING
2.0
Performances
Script
Music/Soundtrack
Visuals
4.0
1.0
2.0
2.0
Suggestions
Can watch again
No
Good for kids
No
Good for dates
No
Wait to rent it
Yes
A month ago, to that day, I watched a film. This film starred Super Star Rajinikanth. It was titled Annatthe. Twenty minutes into the film, I caught myself asking the question, "Is this what an audience wants from their big named actors?" Did Rajini amass a fanbase that spans the globe by beating up 500 goons per film? Could it be a by-product of choosing well-crafted tales brimming with charisma and character? It is a toughie.

However, Annatthe and Akhanda are not the same. These two films have one key difference.

Akhanda, directed by Boyapati Srinu, stars Nandamuri Balakrishna in a dual role. He begins the movie as do-gooder Murali Krishna and re-enters it as Aghori, Akhanda Rudra Sikandar Aghora. If you feel like the latter's name isn't long, feel free to tack on Aquaman, Batman, Superman Aghora as well.

The plot dictates that the duo of Balayyas stop the evil Varadarajulu (Srikanth) and Gajendra Sahu (Niithin Mehta) from extracting uranium. The task seems doable enough for a man who once had a train retreat by a mere pointing of his finger. Alas, the film's script keeps getting in his way.

The script, also written by Boyapati Srinu, finds it hard to tell a story because it has more pressing issues to channel its time to. For one, every scene involving its male lead needs to come off as if it were an introduction scene. If a man begins the film by dispatching 50 goons without breaking a sweat, how is one supposed to feel a sense of tension at whatever the world throws at him? But don't you dare ask the filmmaker this question, though - he'll have a long-winded speech about the importance of "culture" to shut down any doubters. You may ask - wasn't this the same director who introduced the lead actress of his previous film by having the camera peep down her top? A deafening silence ensues, because "samaskaram" wasn't the flavour of the month last time around.

The writer has a flawed understanding of complex philosophy and theology. An illustration of that is the sweet zinger "there is a temple in front of every hospital". Never mind that people have to go into the hospital to get their ailments treated instead of praying the pain away with the idol at the front porch.

This shallow writing bleeds into the characterization of the villains. Srikanth's Varadarajulu is a terrifying man who rapes and murders at a whim. Not one person knows what motivates this man's actions (including the writer/director). The character does hang out at a uranium mine without any protective gear. Maybe therein lies the answer.

We also have a bigger bad in the form of a fake godman, Gajendra Sahu. He stole his seat of power, tricks his devotees, and mines for uranium while staying in touch with practitioners of the dark arts. A bad guy with bad habits should be a formidable foe to our hero, but little does he know that messing with a Balayya character is like trying to bet against a casino. The house always wins.

Balayya always wins means both the characters have no moments of learning and growing. They came perfect right out of the box like a GI Joe action figure. The toy has no character depth except for what one superimposes onto it. While this analogy works gangbusters for the Murali Krishna character, the lack of any sense of realism afforded to the role of the Aghori is shocking at best. The film deserves a round of applause for making an Aghori, one of a fascinating subset of people, a bore.

Balayya isn't the problem here. While he has been the darling of meme-makers everywhere, the characters written for him let him down tremendously. An Aghori doesn't need punchlines in English. A farmer doesn't need to "look cool" demolishing a hoard of nobodies before declaring that violence is wrong. And tasking a 60-year-old man with making a quasi-item song palatable should be a no at the planning stages. When choices like these come about, the fingers of every single jokester perk up.

The lesser said of the other actors the better off we'd be, as we'd be writing more about them than the writers of this movie. Lest we forget, Pragya Jaiswal completes the female quota in this film. She is a tough-on-corruption IAS officer who does tough-on-corruption things before doing the right thing by finding herself a man.

Finding oneself a big, strong, mustache-twirling man needs to come packaged with a mustache-twirling score. There is only one man you call for a task as impossible as this. That man is Thaman. On his best day and in the right direction, Thaman graces us with the album of Ala Vaikuntapuramlo. We get a generic cacophony of noise on most other days. This soundtrack and score are one of the latter.

Complimenting the noisy audio is the hyperactive visual grammar of the film. The movie inflates in scale and scope with a barrage of cuts, zooms, pans and closeups, and a series of stunts that skirt the line between realistic and ridiculous for a few moments before nestling into the well of ridiculousness forever.

Speaking of that well of ridiculousness, the one difference between Annatthe and Akhanda is that Annatthe had me laughing at the screen for the first time at a Rajini film. I'd always laughed with Rajini and never at him until the 4th of November 2021. However, with Balayya, I'd laughed at his more commercially-oriented films for as long as I can remember. Akhanda however was a film so steeped in the monotony that it took my little ball of joy away from me. I'm ashamed to tell you that the 4th of December 2021 was when I stopped laughing at a Balayya film. Not being able to laugh with or at a bad movie is a grim moment for any viewer. 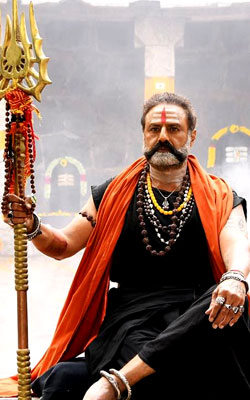 ADVERTISEMENT
This page was tagged for
Akhanda telugu movie
Akhanda reviews
release date
Nandamuri Balakrishna, Pragya Jaiswal
theatres list
Follow @fullhyderabad
Follow fullhyd.com on
About Hyderabad
The Hyderabad Community
Improve fullhyd.com
More
Our Other Local Guides
Our other sites
© Copyright 1999-2009 LRR Technologies (Hyderabad), Pvt Ltd. All rights reserved. fullhyd, fullhyderabad, Welcome To The Neighbourhood are trademarks of LRR Technologies (Hyderabad) Pvt Ltd. The textual, graphic, audio and audiovisual material in this site is protected by copyright law. You may not copy, distribute, or use this material except as necessary for your personal, non-commercial use. Any trademarks are the properties of their respective owners. More on Hyderabad, India. Jobs in Hyderabad.