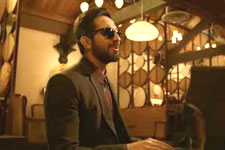 Sonali Dabade / fullhyd.com
EDITOR RATING
9.0
Performances
Script
Music/Soundtrack
Visuals
8.5
9.0
8.0
8.5
Suggestions
Can watch again
Yes
Good for kids
No
Good for dates
Yes
Wait to rent it
Yes
Ayushmann Khurrana is known for doing men-centric films. His first movie Vicky Donor focused on sperm donation, and his last one Shubh Mangal Savdhan talked about erectile dysfunction, and both received much critical acclaim. From winning the second season of MTV Roadies in 2004 to turning an accomplished actor, singer and songwriter, this multi-talented man has come a long way. And with Andhadhun, he hits the nail on the head yet again.

Andhadhun is the story of a blind pianist, Akash (Ayushmann Khurrana) who is experimenting with his music and preparing for a music competition in London. He meets Sophie (Radhika Apte) who takes him along to work for her father's café called Franco's. Erstwhile movie star Pramod Sinha (Anil Dhawan) notices him there and books him for a private concert at his house, hoping to surprise his wife Simi (Tabu) for their wedding anniversary. However when Akash reaches their home and unwittingly becomes a witness to a crime, his life and vision go for a toss. What follows is a story of complete hilarity and shocking evil.

Everything has gone right for Andhadhun - right from its trailer. Crisply cut and packed with jolts, the trailer built up enough suspense, and that lasts until the very end of the movie itself. There was not much in this Sriram Raghavan-helmed movie that you can fault. The humour and the shock value of things combine so effortlessly and brilliantly that you will likely get confused about what is funny and what is shocking. Yet, this only adds to the attraction of the movie rather than take away from it.

There is an underlying message to the plot which could be intentional or unintentional. There are reasons why Akash chooses to stay away from the crime and act as if it didn't happen. How many witnesses think like this? How many people stay away because they think it would be better off for them? And how many think a little too late about what's right and what's not? It isn't about being blind. It's about not acting blind towards what's happening around you.

Ayushmann Khurrana is amazing as Akash. He is believable, makes you feel sorry for him, makes you laugh and makes you cry. Radhika Apte, in the small role that she has, is enough, though after a point you cannot think of anyone else as Sophie. Manav Vij as Manohar, the police officer, doesn't stand out but you cannot really find fault with him. He just fits in like yet another piece of the masterpiece puzzle.

The best performance of the lot, however, is that of Tabu. She just owns the role. She slips into Simi, and once you're convinced - it doesn't take long for that - there's no going back. Simi is casually evil, which is the most dangerous kind of evil there is. Someone who can decide to murder a person like it was just another chore. So deep into the movie, when she asks for trust, you get physical in your seat shaking your head vigorously and muttering, "Don't! Don't! For God's sake, don't!"

There's a rather pronounced Amit Trivedi touch to the songs. He has a way of lending soul to them, no matter whether they are happy or sad. The songs are great, the background score fits the situations perfectly, and Arijit Singh's pleasant surprise is one gift too many from this all-round wonderful film. How much can a film just give and give?

The cinematography and editing are crisp, to the point where you are transported to the places in the movie. You're in a hospital, you're in a moving car, you're looking at a train zoom by, you're in a field following a rabbit - you're everywhere. Everything combines just perfectly on screen, and makes you want to laugh and cry and get angry and feel shocked, all at the same time.

Andhadhun is a typical Sriram Raghavan movie - meaning it is a must-watch. Watch it for Tabu, for Ayushmann Khurrana, and, mainly, for Sriram Raghavan.
Share. Save. Connect.
Tweet
ANDHADHUN SNAPSHOT 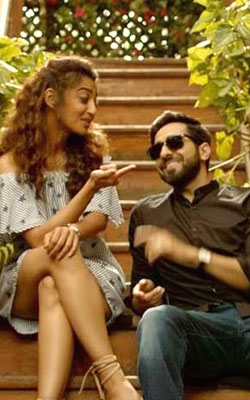 See Andhadhun full details
ANDHADHUN USER REVIEWS
1 - 3 OF 3 COMMENTS
POSITIVE  |  NEGATIVE  |  NEWEST  |  OLDEST  |  MOST HELPFUL  |  LEAST HELPFUL
USER RATING
8.5
2 USERS
Performances
Script
Music/Soundtrack
Visuals
NA
NA
NA
NA
Can watch again - NA
Good for kids - NA
Good for dates - NA
Wait to rent it - NA
Hari on 16th Oct 2018, 12:30pm | Permalink
Fabulous movie !!!
RATING
9
mukhtarhope on 7th Oct 2018, 4:21pm | Permalink
Beautiful Direction, Beautiful acting, Good Script & Screenplay, Good Camera work. A Real Good movie.Not to be missed. Do not go by the poster, it might not look attractive. The actors might not look glamorous, but they have really dedicated their efforts to this movie. the whole team has worked hard.There is a proverb in English. "Don't judge the book by its cover, Read the contents". The movie is also the same. Really Beautiful from inside. A real seat edge thriller. Don't miss the beginning. See it from the start. I might see it once again. Really Great in a short budget film, rather than big names with nothing. Do see this movies. Every actor have done their best and even the Director..Great.
RATING
8
Jyothi on 10th Oct 2018, 4:34am | Permalink
Movie Review : Andhadhun (Blindly..) - Sriram Raghavan shows how a black comedy thriller should be done! DO NOT MISS!!!

What is life?
That all depends on the liver.

ADVERTISEMENT
This page was tagged for
Andhadhun hindi movie
Andhadhun reviews
release date
Ayushmann Khurrana, Tabu
theatres list
Follow @fullhyderabad
Follow fullhyd.com on
About Hyderabad
The Hyderabad Community
Improve fullhyd.com
More
Our Other Local Guides
Our other sites
© Copyright 1999-2009 LRR Technologies (Hyderabad), Pvt Ltd. All rights reserved. fullhyd, fullhyderabad, Welcome To The Neighbourhood are trademarks of LRR Technologies (Hyderabad) Pvt Ltd. The textual, graphic, audio and audiovisual material in this site is protected by copyright law. You may not copy, distribute, or use this material except as necessary for your personal, non-commercial use. Any trademarks are the properties of their respective owners. More on Hyderabad, India. Jobs in Hyderabad.