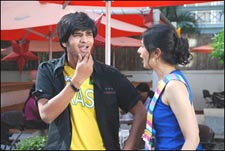 EDITOR RATING
3.5
Performances
Script
Music/Soundtrack
Visuals
5.0
2.5
5.0
5.0
Suggestions
Can watch again
No
Good for kids
Yes
Good for dates
Yes
Wait to rent it
Yes
Maturity is when you hit the same situation in life once again, and have a foreboding sense this time of where it can lead to. Taking the same path that you did the last time is, well, just being human.

Ankit, Pallavi And Friends is a tale of love, break-up and getting back together. You can see the break-up coming for a while, and if it affects you any more than such stuff in a movie used to when you were 15, and sets your mind off into a more elaborate spiral of thoughts than the no-frills script warrants, well, that's some unfortunate maturity, for this is an extraordinarily ordinary script, a mere Happy Days wannabe. And if you triumphantly support the hero or the heroine for the course they take at that crossroads, maybe you're just being human, too.

Ankit (Nikhil Siddharth), Pallavi (Megha Burman), and Sunil, Raja and Gopi (Venu, Surya/Pingpong and Pradeep) are a bunch of just-out-of-collegers hanging out together, and Ankit woos and lands Pallavi despite him being what the world would call a loser - he's failed in BA, works as a waiter to avoid taking money from his parents, is more idealistic and self-respecting than street-smart, and dreams of making it big as a musician.

Pallavi stands by him despite him simply refusing to mould or even give up smoking for her, but when he blows a great chance to make it big by slapping a music director who's giving him a break, they have the final installment of the Great Argument, and break up.

The first break-up for most persons is nothing like what they thought it would be, since we all grew up watching the movies where it all works out in the end in an inseparable hug between the couple who have all through been pining for each other. Reality features the surprisingly hard-hitting pain of another person in the partner's life, and Ankit realizes this pretty soon when he sees a happy Pallavi at a movie hall with another man. And realizes that she's actually gotten over him, and doesn't even want to run into him. Yes, that hurts.

However, this is a movie, and reality checks and BO numbers don't really go together. So the dream starts unfolding - Ankit becomes a roaring hit as a pop star with a lucky break, Pallavi realizes that she's made mistakes in handling Ankit, there's (whew!) actually no other man, and the friends successfully reunite the two. And so ends another movie that perpetuates the myth among the uninitiated that love can never have a permanently sad ending.

A depthless script is not the only problem with Ankit, Pallavi And Friends, and the script doesn't become depthless merely since it romanticizes romance and plays to the BO - it's genuinely poor writing. The film is firstly more Ankit and Pallavi - the friends part is just an lofty attempt at adding some depth and youth appeal, and not anything inherently part of the core tale. The comedy is not up to the high standards that Telugu audiences are used to in the post-Trivikram dialogue-centric era, small things and the flow (like Raja proposing to a pregnant girl) aren't taken care of, and the performance of the heroine doesn't really enrich the experience.

Nikhil and the other guys are generally good, and the music, while tolerable, is unlikely to rise high since the movie itself will not. And this is a low-budget film, so there's not much in terms of a funky visual feel.

Watch Ankit Pallavi And Friends if you are unable to get over Happy Days, but that's an unethical way to get over it.
Share. Save. Connect.
Tweet
ANKIT PALLAVI & FRIENDS SNAPSHOT

Hari Yelleti has chosen “Innovision cinemas” as title of his firm. Much thought must have gone in choosing the name. Let’s hope to see innovative and visionary movies churn out from this firm. APF is the good beginning.

Marketing: - I have come know so much about him even before I saw his first film. I should say hats off to his ability in marketing himself. All wannabe directors, congratulations, you one more success story from which you can learn and get inspired.

Honesty: - It is nice to note Hari Yelleti’s honesty when he remarks “APF didn't happen just like that. It was after numerous drafts and numerous trials…” in one the telugu cine websites.

It’s the real story of toil of successful people, which will make and give courage to new comers to know that the path is difficult but not impossible. His honesty shows up in his screenplay too.

Film Title: The movie is aptly title as each character has important role to play.

Casting for characters: - Except for ‘Sunil’ mother who actually looks like her grand mother, what should I write: - “Yeh hi hain right choice baby…”

Characterization: - The youth characters in APF booze and smoke and talk like real life characters. Thank God, I did not felt like being in wonderland and in the midst of all goody, goody people.

Hari Yelleti has shown his intelligence in design of characters especially to bring in the “believability quotient”. You need not have to look at the characterization of Ankith or Pallavi. Just look at how he develops the character of Naresh’s son. As movie progresses, this particular boy does an act (watch the movie) which a youth in real life, rarely does. But still it doesn’t come out as a fairy tale.

Love: - Mother Theresa once said “We can do no great things, only small things with great love.” After watching APF, one can sure say that “Hari Yelleti and his team might have not done a great, great movie but definitely, he and his team has done it with great love”

Responsibility: - Hari Yelleti and his team take full responsibility and deliver a message oriented YET FULLY ENTERTAINING movie. The message makes itself clear through the story, through the images. In fact, it makes the Voice over of Hari Yelleti at the end of the movie, a redundant inclusion.

Screen play: Within 10 minutes of the movie, the major characters, their socio- educational-economic-cultural background, the challenge they must overcome are all established beautifully.

You find no static moments. The story progresses a step forward with every image. The only scene which seemed to slow the pace was the inclusion of the song “Premani...Premani”…the song doesn’t take the story forward. For reasons, please see the movie.

Movie Length: The story determines the length. But I have seen many movies, which have clichéd, unnecessary scene just acting as padding to meet that 2Hours 30 Minutes length.

Hari Yelleti seems to excel in this aspect. As mentioned earlier, each image takes the story forward thus ensuring no dull moments.

Dialogues: -
The conflict between Ankith and Pallavi, at the interval bang, in the form of dialogue is worth mentioning. One cannot fail to feel that the words are so natural and coming right from the heart of the characters. For me, Sekhar Kammula was one of the best dialogue writers. I can’t help adding Hari Yelleti’s name to the list.

CRAFT: - What I realized when I walked out of the cinema?
I realized that I had just watched FIRST MOVIE of a director. So much of perfection in art of film making in very first attempt!!!

On a funny note: - Hi guys, lets stop showing Indian’s shunning opportunity to go abroad. Transport and Communications medium has grown so well these days that you will be with your dear ones in a moment. Besides, intangible benefits that country derives from such people when they return after 5 or 10 years, cannot be neglected. And glory that we bring to country when we take our knowledge and culture…Need I have to mention about Vivekananda, BKS Iyengar, Nandan Nilekani…


Final Note: - Friends, Hari Yelleti deserves your appointment with “Ankith, Pallavi and Friends”, if not this weekend, do make it by next.

ADVERTISEMENT
This page was tagged for
Ankit Pallavi & Friends telugu movie
Ankit Pallavi & Friends reviews
release date
Nikhil, Megha Burman
theatres list
Follow @fullhyderabad
Follow fullhyd.com on
About Hyderabad
The Hyderabad Community
Improve fullhyd.com
More
Our Other Local Guides
Our other sites
© Copyright 1999-2009 LRR Technologies (Hyderabad), Pvt Ltd. All rights reserved. fullhyd, fullhyderabad, Welcome To The Neighbourhood are trademarks of LRR Technologies (Hyderabad) Pvt Ltd. The textual, graphic, audio and audiovisual material in this site is protected by copyright law. You may not copy, distribute, or use this material except as necessary for your personal, non-commercial use. Any trademarks are the properties of their respective owners. More on Hyderabad, India. Jobs in Hyderabad.