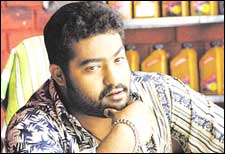 EDITOR RATING
5.0
Performances
Script
Music/Soundtrack
Visuals
NA
NA
NA
NA
Suggestions
Can watch again
NA
Good for kids
NA
Good for dates
NA
Wait to rent it
NA
An interesting observation as you walk out of the theater screening Ashok is the gender composition of the crowd - it's about 90% male. Going by Ashok alone, it is likely to be that way for NTR's next film too.

Ashok is just another NTR film - very high on revenge and violence, with Superman leading the cast. There are chopped heads spinning in the air, there are flailing limbs making their way about, and there is blood spurting out of somewhere or the other half the time. Sewing it all up together is a story that you seem to see twice every month these days. Yes, a big problem for Ashok is that Pokiri and Vikramarkudu, highly violent films, are too fresh in the marketplace, and most Telugu film buffs seem to have seen both.

Add to that the fact that families will stay out of such gore - there's nothing here in terms of comedy or romance - and what you have is another one in NTR's now long litany. Ashok will perhaps not sink in the spectacular fashion of Narasimhudu, but it is certainly not the triumph that NTR is looking for to resuscitate a career spiralling into nowhere.

Ashok (NTR) is a mechanic staying away from his family after his father (Prakash Raj) has expelled him from home for his violent ways. In the process of saving his sister from some goons, he makes a very powerful enemy, KK (Sonu Sood), a savage ganglord. To make matters worse, KK falls in love with Anjali (Sameera Reddy), who is Ashok's girl.

Ashok goes about decimating KK's gang when the latter tries to take him on, until KK hatches a ploy to get Ashok's father to get him to move to Delhi to take up a job. KK then captures Anjali and kills Ashok's best friend Raju (Rajiv Kanakala) who is trying to save her. This makes Ashok return, and the gore gets some notches higher as vendetta takes its rightful place at the top of this film's feature-list.

The only light moment in the 3-hour film is a brief interlude with Venu Madhav. Everything else feels so déjà vu - a villian guided by an evil mother, goons brandishing swords and travelling in Sumos Seema-style, lines about true heroes not being scared to die… Even the premises for the songs look so embarrassingly forced in.

Added to that, the romance element is almost absent - the courtship is as unlikely as it can get, and NTR and Sameera Reddy don't have much onscreen chemistry. For starters, she's taller than him. And then, she is used primarily for songs, which themselves are not chartbusters.

The film then becomes basically a gore tale, which will work only if enough passions are aroused in the audiences through powerful characterization, inciting sequences and electrifying dialogues. There are parts where the film delivers on these - like when NTR chats up the villian's mother - but they are too few. This is a film about brute muscle power, not creativity.

The interval scene, for instance, could easily have seen KK shoot the cornered Ashok's brains out before the latter pulls the pin of the grenade in his hand, or even after. Instead, an army of goons chooses to run.

All performances are good, and the film also looks good due to some slick camerawork. But it doesn't have that special something to make a violent film a hit - the primary reason being that it is not easy to come up with some special something in a violent film now, given how many of them have hit the screens this season and even become hits. There's been an overdose, and people have seen too much nifty work in that genre to be easily impressed anymore.

NTR is stuck in an image that worked while it did but is being grossly overdone now. He needs luck in finding some innovative directors who can use his acting potential in alternate genres.
Share. Save. Connect.
Tweet
ASHOK SNAPSHOT

See Ashok full details
ASHOK USER REVIEWS
1 - 15 OF 23 COMMENTS  |  NEXT  |  LAST
POSITIVE  |  NEGATIVE  |  NEWEST  |  OLDEST  |  MOST HELPFUL  |  LEAST HELPFUL
USER RATING
5.6
335 USERS
Performances
Script
Music/Soundtrack
Visuals
NA
NA
NA
NA
Can watch again - NA
Good for kids - NA
Good for dates - NA
Wait to rent it - NA
Naveen on 29th Jul 2006, 6:27pm | Permalink
this movie is another milestone for NTR flops.But one thing is gud in this movie. i.e. he did not raise the topic of his family like maa thata maa ayya maa babai...
RATING
2
Hemambara Uthakota on 17th Sep 2015, 6:59pm | Permalink
Route en story, but good direction and taking ,photography is good, fights and bag round music
higlet in this movie ...fights , love seen good
Karthik on 29th Jul 2006, 12:50pm | Permalink
The Career in film industry is over for NTR
RATING
4
Rahul Kavuri on 26th Jul 2006, 4:33pm | Permalink
this flick can be rated as an above average, though the story line is not creative, the direction was definitely... NTR's dance is awesome
RATING
6
Nirnay on 20th Jul 2006, 4:40pm | Permalink
give a break guys, no more antegravity movies please.try some thing real, like aanand and godavari..please
RATING
2
Raja Chowdhury on 20th Jul 2006, 4:45am | Permalink
horrible movie of the year so far
RATING
2
Priyanka Reddy on 18th Jul 2006, 1:45pm | Permalink
I would have wanted a rating between 2 and 3 but I had to resort to 2 because, I did not like the movie very much. The movie is technically good if not a bit overdone, but story wise, NTR is making the same old mistakes. Lets wait what he has in store along with Krishna Vamsi.
RATING
4
Rahul on 18th Jul 2006, 6:56am | Permalink
Its ridiculous that idiotic movies like these are even made or let alone released in 30+ theatres! This movie is not even one ounce different than ALL of his previous movies... same stupid theme, same stupid dialogues, same stupid women chracterizations!!! Only in Andhra boss!!
RATING
2
Sai on 17th Jul 2006, 11:19am | Permalink
first half is nice second half drags.songs picturization is just cool. Ntr must shed sum weight.
RATING
8
Rajamouli Ss on 15th Jul 2006, 11:50am | Permalink
okkadu minus mahesh,minus bhumika,minus basic script minus entertainment. all blood,but thankfully no skin.

RATING
2
Satii Babu A on 14th Jul 2006, 6:45pm | Permalink
It is not upto expectations. Prakash Raj action is good. Remaining is boresome
RATING
4
Prasad D on 14th Jul 2006, 2:04pm | Permalink
old wine in new bottle
RATING
2
Angie Jones on 14th Jul 2006, 12:09am | Permalink
Harish G - U must be crazy to compare Rajnikanth n Hritik Roshan n NTR. Rajni sure doesnt have the charming looks or the personality - he is brought close to the masses bcoz of his genuine acting skills. Rajni is a very sincere actor and the same applies to Hritik Roshan too. Hritik has the looks n the capacity to act - unlike Jr NTR n other popular telugu heroes who think no end to themselves.
RATING
2
Praveen on 13th Jul 2006, 6:27pm | Permalink
Seema films suck. We have had enough of seems films and associated machismo. It is time the idiots at tollywood try some creative stuff.
RATING
2
Harish G on 13th Jul 2006, 5:31pm | Permalink
Shit, feminine movie reviewer again. n these ppl don't know wats goin on in the minds of us, males. plzz change her, fullhyd.com. replace with a mass masala guy , who replicates our mentality(millions of us) .movie is brilliant. demons should get their heads chopped, isn't it? only devils feel it's wrong to do so. if hritik does the same, gals clap, cuz, he's born smart. but if ntr jr does, these things don't react cuz he doesn't appeal to them. wat has physique to do with heroism , wat about rajanikanth, wat about mgramachandran,

ppl keep saying many things, but heroes don't stop their way to stardom,

ADVERTISEMENT
This page was tagged for
????? ???? ??????? ???????? ?????? ????
Ashok NTR Telugu videos films
Ashok telugu movie
Ashok reviews
release date
Follow @fullhyderabad
Follow fullhyd.com on
About Hyderabad
The Hyderabad Community
Improve fullhyd.com
More
Our Other Local Guides
Our other sites
© Copyright 1999-2009 LRR Technologies (Hyderabad), Pvt Ltd. All rights reserved. fullhyd, fullhyderabad, Welcome To The Neighbourhood are trademarks of LRR Technologies (Hyderabad) Pvt Ltd. The textual, graphic, audio and audiovisual material in this site is protected by copyright law. You may not copy, distribute, or use this material except as necessary for your personal, non-commercial use. Any trademarks are the properties of their respective owners. More on Hyderabad, India. Jobs in Hyderabad.