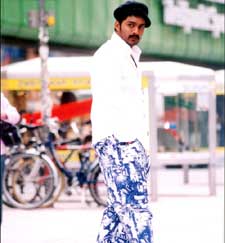 EDITOR RATING
6.0
Performances
Script
Music/Soundtrack
Visuals
NA
NA
NA
NA
Suggestions
Can watch again
NA
Good for kids
NA
Good for dates
NA
Wait to rent it
NA
It's not everyday that you have a new member of the Nandamuri family making his debut as hero on the silver screen. Okay, maybe it is. Kalyan Ram is the latest in a loooong list of continuing entrants from the family onto Tollywood screens. And by continuing, we mean continuing - they have one debut scheduled for every Monday, Wednesday and Friday of the coming century (including in leap years). And all of them will say that they learnt from their grandfather, and pose next to his cut-out.

Actually, that's one thing that you gotta give Kalyan Ram - he doesn't mention his illustrious ancestor once in the entire film, in a big departure from the mould. He doesn't mention a lot of other things too, including several that he should - like, for example, who palmed off his wardrobe to him, so we know another person to run from. But, ah, what's a little fashion faux pas when he's made such a big sacrifice?

So Ram (Kalyan Ram) is a student who comes to Hyderabad with one single objective. He looks like he's even written it down somewhere for quick reference. In Hyderabad he runs into Anjali (Sindhu Tonali), a co-student, and they discover that they have similar tastes and interests - they both want to brutally murder Anna (Ashish Vidyarthi), preferably after deep-frying him in boiling oil, leaving him in a room with six bulls in heat, and finally making him watch six Teja films back-to-back.

Nothing this intense can be without a flashback, and sure enough, there is one, and it is shown in this film itself. Ram and Anjali are cousins in a large happy family that has been massacred by the dreaded don Anna when they were kids. These two are the sole survivors, and while Ram is brought up by foster parents in Delhi, Anjali is brought up by an uncle who's also escaped the slaughter.

They grow up with a burning desire for revenge, and even go around with notes in their pockets that if they are found dead, nobody should look for them. The process soon starts, with the two main henchmen of Anna dying. Anna is quite pissed, since he expects his people to always tell him before doing anything. He kills his main rival Sudhakar (Rami Reddy), but even then Sudhakar doesn't confess to having done it, making Anna suspect that maybe someone else has done it. And when he finds out what is happening, all hell breaks loose.

The film has some pretty innovative editing and slick camerawork, making it a pleasure to watch. Some scenes, like the interval shot of Ram killing Sada and the one where he kills Anna's brother, are high on adrenaline, making the audiences scream out. Kalyan Ram is better than several newcomers, though he cannot bring life to the character he plays. He suffers from the same problem as all new heroes - dialogue delivery in strong scenes. This is actually his third film after a disastrous first two, and he's apparently produced it himself. Sometimes desperate measures work a charm.

Sindhu is good though she has nothing to do finally, and all other performances deliver. Some of the songs are better than average Telugu fare. On the whole, a film worth a watch.
Share. Save. Connect.
Tweet
ATHANOKKADE SNAPSHOT

ADVERTISEMENT
This page was tagged for
Athanokkade telugu movie
Athanokkade reviews
release date
Kalyan Ram, Sindhu Tonali
theatres list
Follow @fullhyderabad
Follow fullhyd.com on
About Hyderabad
The Hyderabad Community
Improve fullhyd.com
More
Our Other Local Guides
Our other sites
© Copyright 1999-2009 LRR Technologies (Hyderabad), Pvt Ltd. All rights reserved. fullhyd, fullhyderabad, Welcome To The Neighbourhood are trademarks of LRR Technologies (Hyderabad) Pvt Ltd. The textual, graphic, audio and audiovisual material in this site is protected by copyright law. You may not copy, distribute, or use this material except as necessary for your personal, non-commercial use. Any trademarks are the properties of their respective owners. More on Hyderabad, India. Jobs in Hyderabad.