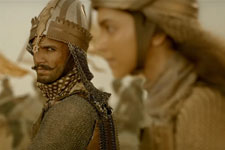 Josh / fullhyd.com
EDITOR RATING
7.0
Performances
Script
Music/Soundtrack
Visuals
8.0
6.0
7.0
9.0
Suggestions
Can watch again
Yes
Good for kids
Yes
Good for dates
Yes
Wait to rent it
No
You know those kids that sneak in comics under textbook covers and pretend to be studying? Film promotion is sometimes like that. Like when Tamasha was marketed as a popcorn-candy romance when it was actually an angst-ridden, catharsis-hunting beast. Or when Bajirao Mastani's trailer focused on the gallant battles of the famous Peshwa (Ranvir Singh) while the movie had to do with battles of a very different kind.

The film is about the valiant warrior, all right. But it's less about his valour and more about his valentine, Mastani (Deepika Padukone). It's about (the already married) brahmin's relationship with the Muslim woman and the resistance they had to face. His wife Kashibai (Priyanka Chopra) is shattered and his mother (Tanvi Azmi) is appalled, and the film showcases the many schemes of the mother and others to immiserate Mastani. In all, it's about the age-old tale of love battling all odds.

The plot clearly has multiple common elements with many other films. The obvious comparisons write themselves. However, with Bajirao Mastani, the comparisons also quickly undo themselves. Because Bajirao Mastani is fascinatingly made. On some levels it is a veritable achievement. One very pertinent comparison here would be with Jodha Akbar - another period film on a warrior whose spouse of another faith didn't curry favour with the matriarch.

But where Jodha Akbar's battle sequences appeared like a rehash of Troy and a 90s launch of Age Of Empires, Bajirao Mastani turns out to be true spectacle. Bhansali's imagination is usually a gamble, and in this case, blazingly anachronistic (artificial water fountains in the 1700s?). But his maverick vision (along with stunning visuals by Sudeep Chatterjee, a riveting score by Sanchit Balhara, and jaw-dropping art direction by Sujeet Sawant) creates a kind of reimagining that historical fiction deserves.

Further, where Jodha Akbar's drama dynamics were sourced from Ekta Kapoor's recipe book (that film was in part a glorified saas-bahu episode), Bajirao Mastani provides impactful drama, and you genuinely feel the pinch. Mastani stakes her pride and life to be with the Peshwa, and this isn't just convenient history but effective writing.

And these comparisons with Jodha Akbar bring us to discuss this phenomenon called Deepika Padukone. Indeed, she and Aishwarya Rai Bachchan have so much in common. They hail from the same region (near Mangalore), were both successful models, and were both atrocious debutantes in acting. But while Bachchan continues to shriek in the name of acting (please refer to Jazbaa), Padukone has moved on to being a true performer. She doesn't fit some roles perhaps, in the physicality of them, but she sure expresses emotions like she were feeling them. Despair, assertion, courage, you name it.

And Ranveer Singh resonates with her in terms of the confidence in performance. Compelling as the commanding Peshwa and convincing as the crushed soul, he is a sight to watch as he descends into a febrile lunacy towards the end.

Equally good are Priyanka Chopra and Tanvi Azmi. They share one of the best moments in the film where the dejected mother and the daughter-in-law, sewing a saffron flag, joke that they might as well be sewing a green one. It is unsettling to watch the tears that roll down their cheeks as they fake laugh.

Positives notwithstanding, the film does suffer from many ineffective scenes. For one, there is the matter-of-fact exposition of historicals that can't be done away with nor can be shown interestingly. And like with Tamasha again, the primary conceit of the film fails to register. Tamasha was about passion in storyland but none of the passion nor the story-telling impressed. Likewise, Bajirao Mastani bases its drama on the deep love of the titular couple. Except, we don't see why they are in so much love.

But somewhere we wonder if it is really impossible to give us the juicy conflicts without demanding leaps of faith. That risk-benefit analysis is yours to make, though.
Share. Save. Connect.
Tweet
BAJIRAO MASTANI SNAPSHOT 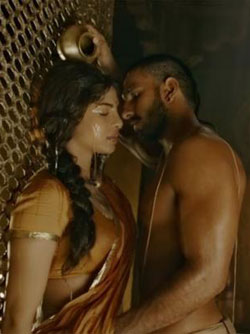 ADVERTISEMENT
This page was tagged for
bajirao mastani hindi full movie
summary of movie bajirao mastani in hindi
Bajirao Mastani hindi movie
Bajirao Mastani reviews
release date
Follow @fullhyderabad
Follow fullhyd.com on
About Hyderabad
The Hyderabad Community
Improve fullhyd.com
More
Our Other Local Guides
Our other sites
© Copyright 1999-2009 LRR Technologies (Hyderabad), Pvt Ltd. All rights reserved. fullhyd, fullhyderabad, Welcome To The Neighbourhood are trademarks of LRR Technologies (Hyderabad) Pvt Ltd. The textual, graphic, audio and audiovisual material in this site is protected by copyright law. You may not copy, distribute, or use this material except as necessary for your personal, non-commercial use. Any trademarks are the properties of their respective owners. More on Hyderabad, India. Jobs in Hyderabad.