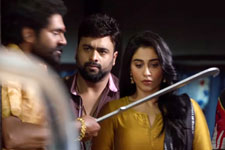 The apple doesn't fall too far from the tree I suppose, as Nara Rohit, too, pays his respects to his clan by now starring in a movie titled Balakrishnudu. Creativity be damned and fan service be damned, because this is family service.

A title as original as that also has a "super-original" plotline to boot. The prologue has the warring families of good guy Ravinder Reddy and bad guy Pasi Reddy. Because Pasi Reddy can't match up to the awesomeness of his righteous counterpart, he kills himself. Shrewd move, that.

Pasi Reddy's son Pratap Reddy (Ajay) goes on a murderous rampage and kills Ravinder Reddy. The good dead man's idealistic aspirations are held aloft and executed (in this one village) by his sister Bhanumathi (Ramya Krishnan). She keeps the peace by killing bad guys one after the other and is never imprisoned for her actions, while Pratap Reddy spends a decade in prison for his one murder.

Away from the cavalier blood spatter is Bhanumati's niece Aadhya (Regina Cassandra), a woman who cares about having a boyfriend and not much else. After being informed of Pratap Reddy's impending release, the righteous set of murderers hire Balakrishna (Nara Rohit) to protect Aadhya, and pay him two lakhs a day for that. Think about that - it's 7.3 crores a year. Someone please get me that job.

Soon enough our leads are forced to fall in love. And the director and his writer show you how not to add a modicum of originality to a barebones plot that has been in existence since the dawn of the first ape. But originality and cleverness are not all that are sacrificed here - the talents of Ramya Krishnan, Regina Cassandra and Nara Rohit, too, are all offered up to the gods of "commercial" cinema.

The gross underutilization of talent is most evident when you realize that the duo in the lead made two-thirds of the excellent lead trio in last year's Jyo Achyutananda. No one needs your comic timing and underrated acting skills Nara Rohit - what audiences really want is you beating up nameless A-holes with all the grace of a bear mauling a gazelle. And, Ms. Cassandra and Mrs. Krishnan, please don't give us anything more than your B-material from Nagaram and Baahubali. I mean, this is "mass" cinema that is catered to the "real" audience, what do they care about women? It's not like they make up half the world's population. We will have you abuse and assault men with no rhyme or reason and forget about it soon and have you covered in fear because, feminism.

Finally, every time someone gives Ajay a bad role in a film, an angel gets its wings clipped.

This lazy approach to filmmaking begins with the movie's script, and permeates the performances, score, editing and cinematography. Six mediocre songs sound even worse when they are inserted into the film, aided by scenes that literally have nothing to do with the main plot. Why would the filmmakers do this, you ask? They are trying to please all four quadrants here, and by God, they fail gloriously while trying to do that.

Through all this, the characters in the movie seem oddly aware of the its shortcomings. One of them says "manchi faction cinema choosi chaala rojulaindi", and your hero says "ikkada kathalu levu - manchi katha dorikithe cheppu". To both these men I say "yeah, I'm waiting for one, too" and "odd that you still chose to star in it" respectively.

This is a movie where the hero sets up a camera in the heroine's room for surveillance purposes and yet still spies on her room using a telescope. There is no measuring the amount of lazy in this one. Watch it only for a few funny lines, if you dare.
Share. Save. Connect.
Tweet
BALAKRISHNUDU SNAPSHOT 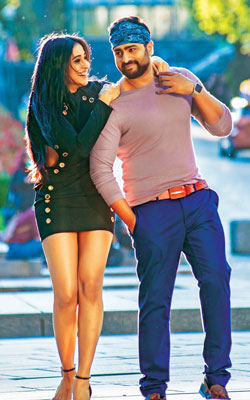 ADVERTISEMENT
This page was tagged for
Balakrishnudu telugu movie
Balakrishnudu reviews
release date
Nara Rohit, Regina Cassandra
theatres list
Follow @fullhyderabad
Follow fullhyd.com on
About Hyderabad
The Hyderabad Community
Improve fullhyd.com
More
Our Other Local Guides
Our other sites
© Copyright 1999-2009 LRR Technologies (Hyderabad), Pvt Ltd. All rights reserved. fullhyd, fullhyderabad, Welcome To The Neighbourhood are trademarks of LRR Technologies (Hyderabad) Pvt Ltd. The textual, graphic, audio and audiovisual material in this site is protected by copyright law. You may not copy, distribute, or use this material except as necessary for your personal, non-commercial use. Any trademarks are the properties of their respective owners. More on Hyderabad, India. Jobs in Hyderabad.