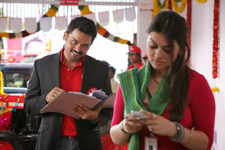 Kritika Deval / fullhyd.com
EDITOR RATING
6.0
Performances
Script
Music/Soundtrack
Visuals
6.5
5.0
7.0
7.5
Suggestions
Can watch again
No
Good for kids
No
Good for dates
Yes
Wait for OTT
Yes
We have a confession to make. It was hard sitting in the theatre for the full two and a half hours that the movie took to get over. We got restless. We yearned to get out of the theatre and on the road. And the film's appeal had nothing to do with it.

It's just that every time we dragged our glutton of a brain (we're not really supposed to have individual brains. Isaac Asimov might have something to do with that) back to the in-fact rather exciting film, we'd think of the name, and it (the aforementioned brain and not the film) would start scrolling through its not insignificant database of places to satisfy its gluttony and rattling of names like Shadab, Bawarchi, Sarvi, Bahar Kaif (not Caf-ey, never Caf-ey), Madina... See? It won't stop.

The first spoonful of your average biryani tends to be not much more than a bland mouthful of fragrant rice. It is only once you start getting to the meat and the masala that your taste buds get to revel in that perfect medley of flavours that skilfully permeate your mouth. Please be patient. This analogy extends beyond our brain's tendency to reduce us to a receptacle for its gastronomic indulgence. It is when we get to the meat, the soft, delicious meat marinated in spices delicate and robust at once which send your head spinning... No. That's not it. It's the brain talking again, you see?

So anyway, thus it is that we get to Biryani. True to its name, it begins in a bland, template fashion, with Sudheer (Karthi) the playboy getting all the attention for being Tolly-garden variety chick magnet. He's so handsome, so slick, so yummy he gets all the chicks salivating, salivating, yummy, food, birya- ugh! Shut up, brain! You're getting out of control!

Where were we? Yeah, with our smooth-talking hero who gets our heroine Priyanka (Hansika Motwani) out of the frying pan - no, lets not go there. Out of a soup - that's not it either. Never mind. Out of trouble, then, and gets himself into a lot more trouble. You see, Priyanka is a reporter interviewing the owner of the auto company Sudheer works for, and, long story short, he ends up taking the interview, thus attracting some unsavory attention.

Post a corporate party that involved old people shaking their booties to old Ilayaraja numbers, he drags his friend off in search of a plate of... we can't say it, but it begins with a "b" and ends with an "i" and is yummy and spicy and takes hours of intricate preparation and is incomplete without meat and why would anyone ever be vegetarian in the face of spicy hunks of soft meat enrobed in fragrant basmati and - that it, brain! We're done with you.

So, it is after this... ingestive activity... (must. resist.) that the shit really hits the fan, in constantly intricate patterns too.

The film is a whodunit that makes the who-done-what obvious pretty early on. Nevertheless, the action moves at a fast and sustained pace, aided by a decent enough screenplay, but supported tremendously by fantastically stylish cinematography and editing.

This movie, readers, is stylish as hell. The cinematography, whether in action scenes or in the surprisingly catchy songs, and throughout the film, as a matter of fact, blends seamlessly with the screenplay, and turns it into a smooth, pulsing psychedelic display of images.

The background track is just as captivating, with the screenplay depending on the perfect medley of these two elements to hold your attention during the slightly more than rare occasions on which it slacks off.

As far as the performances are concerned, Karthi delivers a unique performance, playing skillful jump rope with a thin line between hero and boy-next-door-in-trouble. Hansika Motwani looks charming, but delivers a performance sorely limited by a shallow character sketch.

Ramki, Premgi Amaren, Nassar and the rest are each pitch perfect in roles that serve as foils to the thriller, whose performances only palls short when the plot does so. Madhumitha is gorgeous, and plays the slightly dim femme fatale with relish.

Bottomline: This biryani is yummy enough, if not transcendental. You can enjoy a plate enough without wanting to go back for more. And now we must take our leave, for we cannot resist... the brain... any--------.
Share. Save. Connect.
Tweet
BIRIYANI SNAPSHOT 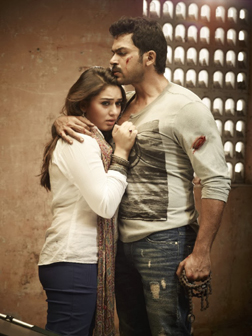 ADVERTISEMENT
This page was tagged for
Biriyani telugu movie
Biriyani reviews
release date
Karthi, Hansika Motwani
theatres list
Follow @fullhyderabad
Follow fullhyd.com on
About Hyderabad
The Hyderabad Community
Improve fullhyd.com
More
Our Other Local Guides
Our other sites
© Copyright 1999-2009 LRR Technologies (Hyderabad), Pvt Ltd. All rights reserved. fullhyd, fullhyderabad, Welcome To The Neighbourhood are trademarks of LRR Technologies (Hyderabad) Pvt Ltd. The textual, graphic, audio and audiovisual material in this site is protected by copyright law. You may not copy, distribute, or use this material except as necessary for your personal, non-commercial use. Any trademarks are the properties of their respective owners. More on Hyderabad, India. Jobs in Hyderabad.