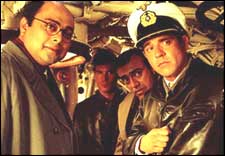 Indu Gopoji / fullhyd.com
EDITOR RATING
8.0
Performances
Script
Music/Soundtrack
Visuals
NA
NA
NA
NA
Suggestions
Can watch again
NA
Good for kids
NA
Good for dates
NA
Wait to rent it
NA
Not many of us know about Subhash Chandra Bose. Even if we have read about him, it would have been in those primitive ages of our secondary education that we have so effortlessly and proudly forgotten. This movie about Subhash Chandra Bose is a slap on the cheek of the historians who have directly or indirectly helped promote Gandhi as the unopposed monarch of the Indian Independence struggle.

Shyam Benegal's magnum opus (at Rs. 40 crores, one of India's most expensive films ever) is an opulent silver wreath to a name whose position is strangely wobbly whenever the credits roll on the Indian freedom struggle. Bose is most famous for the rebellious feathers he donned, and for providing a voice, a platform and an army for people who had blood to shed, but no stream that would carry it in a nation that swore by a Non-Violent Man.

Benegal does not indulge himself in the more alluring option of narrating the 45-year saga of Bose' existence, but concentrates on the last five years of his lifetime. The film is divided into three parts. The first traces the contours of Bose's escape from Calcutta to, eventually, Germany. The second deals with his efforts to cobble support from the Allied Forces for the Indian National Army.

The dalliances here with Hitler show how the adage "an enemy's enemy is a friend" fails the test of application. Hitler didn't ever think highly of India or the Indians. Well, at least he looked funny - whoever portrayed Hitler provided some comic relief in this rather serious movie. The third part concentrates on the formation of the Indian National Army, its journey to India, and Bose's subsequent death in a tragic plane crash.

Benegal is not oblivious to the fact that his audience would want at least a sneak peek into his personal life in the movie, yet he does not overdo this particular detail of the knight's life. A delicate yet mature and understanding relationship with Emilie Shekl just about tinges the surface of the film. If you can get past her acting skills in the beginning, you can enjoy the movie better.

It may escape the viewer's attention, but Benegal actually pays a subtle tribute to Gandhi. The differences between Bose and Gandhi are beautifully contained in the movie. Benegal also explains why Bose refused to adhere to Gandhi's non-violence philosophy.

The casting is impressive, particularly the choice of women artistes. Kudos to Sachin Khedekar for his brilliant portrayal of Bose. His performance and Benegal's helmsmanship, set amidst the inspirational and divine tunes of A R Rehman, makes every frame of this laudable for the vision.

Benegal also superbly brings out the multi-faceted personality of Subhash Chandra Bose, and Khedekar only does the well-deserved justice to this character. Benegal, however, fails, to an extent, if not totally, in recreating the backdrop of pre-independence India.

Benegal no doubt was doing justice to the character of Bose, but how fair was he being to his audience? A three-and-a-half hour fare for six years of Bose's life is a extravagant bargain for a lesson in history.

Yet, it's a thoroughly well-made movie on the whole, give or take a little carping (some amateurish acting and some long battle scenes), and is ultimately a film worth more than your 60 bucks. Certainly cheaper than history text-books, right?
Share. Save. Connect.
Tweet
BOSE - THE FORGOTTEN... SNAPSHOT
BOSE - THE FORGOTTEN HERO SNAPSHOT

ADVERTISEMENT
This page was tagged for
Bose - The Forgotten Hero hindi movie
Bose - The Forgotten Hero reviews
release date
Sachin Khedekar, Divya Dutta
theatres list
Follow @fullhyderabad
Follow fullhyd.com on
About Hyderabad
The Hyderabad Community
Improve fullhyd.com
More
Our Other Local Guides
Our other sites
© Copyright 1999-2009 LRR Technologies (Hyderabad), Pvt Ltd. All rights reserved. fullhyd, fullhyderabad, Welcome To The Neighbourhood are trademarks of LRR Technologies (Hyderabad) Pvt Ltd. The textual, graphic, audio and audiovisual material in this site is protected by copyright law. You may not copy, distribute, or use this material except as necessary for your personal, non-commercial use. Any trademarks are the properties of their respective owners. More on Hyderabad, India. Jobs in Hyderabad.