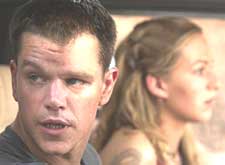 A still from Bourne Supremacy
Bourne Supremacy, an English movie, is not currently screening in Hyderabad.
LATEST COMMENT
Raj Ambati on 14th Sep 2004, 3:36am | Permalink
There is not a moment wasted - that is the bottom line of this spy-thriller. Before you realise it, the movie is over and you find youself tearing that ticket foil and coming out into the hot and humid real world with a satisfying smug on your face revealing time well spent.

Loosely based on the Robert Ludlum's book, adapting just enough to preserve its themes and the neck-breaking pace and a tight knit plot, the English director "Greengrass" lays out a "pasture" of thrills in this sequel to 2002 flick "The Bourne Identity".

The opening dateline at the corner of the screen takes us to Goa, India, where Bourne with his gilrfriend Marie (different from Ludlum's Marie who is kidnapped by CIA) is struggling to jog up his memory while jogging on the shores of Goa.

While he is merrily(?) running on the beaches, a hired killer (Karl Urban of 'Lord of the Rings' fame)in the employ of Russian Businessman, spots our hero, just as when he himself is spotted, of couse, by our hero.

All the running on Goan Beaches comes in handy, as Bournes grabs his girlfried and dashes out in his jeep, only to find our assasin on his heals. That's the beginning of the chase... make it 'a' chase. In a few minutes, you will find the assasin complete his mission and return back to Russia, but only you know that it is just Marie who is dead, and the hero escapes from the attempt on his life and jogs on to Naples to put one and one together.

In the meantime, a series of hits are being carried out across Europe, all that is left behind is smudgy fingerprints of Bourne.

While Bourne is cruising through the continent in an attempt to find out what is happenning, the deputy director of CIA is after Bourne, convinsed that our hero is the rogue killer who not only killed her agents, messed up her sting operation, but also dissappeared with 20 million dollors of CIA money.

As in any other good movie, everybody ends up, no not on the top of the mountain at the end of the town ( ooru civari konda), but in Moscow, which seems to be the theme of recurring dreams flooding Bourne's memory and the clue to his true identity and the reason every one wants to see him dead.

After a nail-biting car chase that makes you feel you are in the middle of the chase yourself, the story comes to an end.

There is something about the way the movie is directed and cut that makes you feel you are right in the middle of the scene - whether it be a mega car chase that any Bond fan is familiar with, or just Bourne taking his suitecase out of a car trunk!

Not a single moment you will find yourself looking around to see what is happenning in the theater around you. The pace is well kept and the editing is - well, it is different and takes you to the middle of the cast. Even ( and most visibly during) the stunts and chase scens that you sense this I-Am-There feeling, which leaves to thrilled and finally exhausting, like a rowdy roller-coaster ride... I call it money well spent.

Well.. I do agree with Charisma, Julia Stiles as Nicky is under-utilised.
0
0
USER RATING
8.0
See all comments
BOURNE SUPREMACY REVIEW


Despite the cost of living, it remains very popular. Especially with Jason Bourne (Matt Damon) who remains relentless in his pursuit to, well, live, even as vicious men are out to kill him. And that is just as well, for there cannot be an eponymous movie minus the character it is named after.

Jason Bourne is still the guy who can do anything. Except cure the zit on his temple. So, when his reclusive hermit existence in Goa gets discovered, he lets his zit grow out and heads for the nearest exit. His companion, Marie (Franka Potente) doesn't make it through. Because Bourne has to....

ADVERTISEMENT
This page was tagged for
Bourne Supremacy english movie
Bourne Supremacy reviews
release date
Matt Damon, Franka Potente
theatres list
Follow @fullhyderabad
Follow fullhyd.com on
About Hyderabad
The Hyderabad Community
Improve fullhyd.com
More
Our Other Local Guides
Our other sites
© Copyright 1999-2009 LRR Technologies (Hyderabad), Pvt Ltd. All rights reserved. fullhyd, fullhyderabad, Welcome To The Neighbourhood are trademarks of LRR Technologies (Hyderabad) Pvt Ltd. The textual, graphic, audio and audiovisual material in this site is protected by copyright law. You may not copy, distribute, or use this material except as necessary for your personal, non-commercial use. Any trademarks are the properties of their respective owners. More on Hyderabad, India. Jobs in Hyderabad.