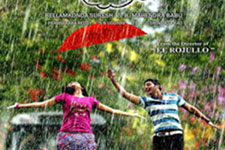 Kritika Deval / fullhyd.com
EDITOR RATING
4.0
Performances
Script
Music/Soundtrack
Visuals
6.0
4.0
4.0
4.0
Suggestions
Can watch again
No
Good for kids
No
Good for dates
No
Wait to rent it
No
Okay. Here's a lowdown on what bus stops in the city are really like. They're filthy. They're dank. And they're full of tired-looking people going about their businesses like zombies. What they aren't is a "lover's adda", unless you're talking about a bunch of skanky Hyderbadi college boys who think whistling at girls and calling out lewd stuff is somehow cool and attractive, which, incidentally, this movie is talking about.

Two things before we commence with doing our jobs, i.e. picking apart the movie and telling you what the good, the bad, and the ugly is, which, in the case of this flick, is mostly the latter two.

1. This is to the girls - if you want to run away with a guy, the way to do it is not by telling him to can an interview that'll set him up for life, and dropping out of college.
2. To dads who want to be "unconventional", saying I love you to the guy your daughter loves, instead of her, is weeeeeeird.

Now for the movie. Bus Stop is the story, no, four and a half stories, of love vs parents - although why the two should be mutually exclusive is beyond us. So, you have Srinu (Prince) and Shailu (Sri Divya), who are in love but haven't spoken to each other in five years - something about a stolen hundred rupee note with Allu Arjun's autograph on it.

Then there's Kanna (Kanna) who'd sell his father's underwear if he could (the father said it, not us) to buy stuff for a girl he likes, but the girl Seema (played by Hasika) is busy turning a studious goody-two-shoes into bad boy extraordinaire while, ahem, milking Kanna for all he's worth.

Then there's the track of a phone slut who is the son of a tiffin-stall owner. When we say phone slut, we're talking about him sleeping around with as many girls as he has SIM cards, literally. And finally, we come to the tale of a daddy's girl whose daddy (Rao Ramesh) is crazy enough to do what we mentioned in point number two.

While all of these "crazy kids" are going about with their debauched businesses - i.e., sleeping around, lying to their parents, stealing from them, stalking their better halves in the name of love, etc. - their parents are plotting to make their lives hell for doing all of the above.

Their Version Of Humour = finding your dad in the towel that's wrapped around you while you're... (God! We can't even describe it, it was that disturbing)

As far as the performances go, they were mostly average, except Rao Ramesh, who totally went Prakash Raj in his over-zealously "cool" parent mode. And then there's Hasika who totally rocks her character of a femme fatale with judgement issues and a good heart. The lead boys mostly look good, suck at acting, and almost get away with it.

The cinematography and the editing were sort of hammy, but a definite step up from the makers' previous venture Ee Rojullo. The music was generic and unmemorable.

Bus Stop is like a messed-up house standing on a sound foundation. If only the makers had left out a bit of the stereotypes and the judgemental attitude, we'd have had a good movie.
Share. Save. Connect.
Tweet
BUS STOP SNAPSHOT 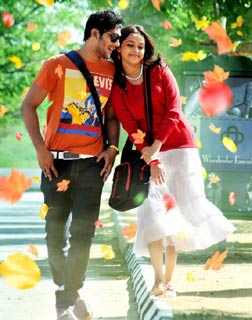 
Pros: Few comedy and sentiment scenes.
Cons: too many to mention.
RATING
4
alex mercer on 12th Nov 2012, 6:00pm | Permalink
time-pass movie aimed at youngsters...good for dates if your partner is equally cool,hip and fun loving as you. species of all other kinds please stay away.
Bus Driver on 11th Nov 2012, 10:46pm | Permalink
Bus Stop-Vulgarity's Adda

ADVERTISEMENT
This page was tagged for
Telugu movie couples
bus stop lovers adda full movie
Bus Stop telugu movie
Bus Stop reviews
release date
Follow @fullhyderabad
Follow fullhyd.com on
About Hyderabad
The Hyderabad Community
Improve fullhyd.com
More
Our Other Local Guides
Our other sites
© Copyright 1999-2009 LRR Technologies (Hyderabad), Pvt Ltd. All rights reserved. fullhyd, fullhyderabad, Welcome To The Neighbourhood are trademarks of LRR Technologies (Hyderabad) Pvt Ltd. The textual, graphic, audio and audiovisual material in this site is protected by copyright law. You may not copy, distribute, or use this material except as necessary for your personal, non-commercial use. Any trademarks are the properties of their respective owners. More on Hyderabad, India. Jobs in Hyderabad.