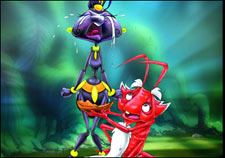 Deepa Garimella / fullhyd.com
EDITOR RATING
5.0
Performances
Script
Music/Soundtrack
Visuals
7.0
6.0
7.0
4.5
Suggestions
Can watch again
No
Good for kids
Yes
Good for dates
No
Wait to rent it
Yes
Grandmothers were our first adventure-fantasy pilots - the first to take us to exotic kingdoms where animals, insects and birds co-habited, fought, celebrated, sulked, and together reasoned out some profound truths of life. What was mind-boggling was the sheer quantity of stories, which had enough variety to outdo a thousand episodes of Nach Baliye. And even the re-runs were fun - whenever a story was repeated, we would still listen wide-eyed, as though it were crisp breaking news, and every time, when the moral of the story was underlined with a 'Hence Proved' certainty, we would nod sagely.

Cheenti Cheenti Bang Bang is a fable intended on those very lines, adapted that it is from a Bengali novel called Lal Kalo. However, the film has the matronly effect of dragging a child along to see a science museum for the 100th time. Apparently, someone assumed that children will identify with anything that contains coloured drawings and speaks in high-pitched voices.

It's a nice, gentle tale, though. Laal Boodha, a wheezing, wobbly-kneed, silly-grinned snow-bearded old red ant, likes to secretly ogle at Kalibau, a dazzlingly beautiful black ant (if she were human, she might have been Priyanka Chopra, going by her sensational entry number), while on her water-fetching routine at the stream. A bunch of mischievous urchins with a catapult, bungle on their aim, and as things turn out, Kalibau thinks the Laal Boodha broke her earthen pot and assaulted her.

Madam Kalibau raises enough hue and cry back at the black ants' royal palace, to convince the loud-voiced, rotund queen to heckle her easy-going, party-hopping husband (yes, we are still talking about ants here) into issuing an off-with-his-head decree. One thing leads to another, and red and black are soon plotting for war. Chief strategist for each faction, unknown to the other, is the warty, slippery-tongued, double-dealing bug Ghunn.

So even as one faction plans to strike, the other have already deployed a chameleon at their gates. One stations a frog for terrestrial defence, and the other launches an aerial attack (with wings provided by magician Beyallis Karma, in an Akshay Kumar-esque cameo), which in turn is thwarted by a legion of aviation experts - the birds themselves.

Lohit, the red prince, had done the sensible thing ages ago - walked out of the whole wasteful exercise as well as the kingdom, and started romancing Krishna, the princess of the black.

In the final battle, both camps ultimately see the error of their ways, because a wise old spider points out that the war has ridiculously spread to other creatures - and it was based on incorrect reports of wrong-doing in the first place. And that is the simple fable, with a simple message - that of the pettiness of war and hatred.

"Simple" just about sums up the film's aspirations, actually. By no means does the movie compete with a Disney animation film, or, closer home, even Hanuman. The drawings are not more exciting than nerdy biology-record diagrams, and this refers just to the ants. The other larger creatures are drawn in even less detail - and with disorienting results.

Hence, the chameleon looks like a baby purple dinosaur, and the mongoose looks like a red-collared Labrador. It would have been fun if there were occasional scale-revealing long distance "shots", and some daily "anty" occupations, but then we are getting too nostalgic about Antz here.

The first half is still interesting, with all those bugs and their head-dresses, make-up, clothes and even mannerisms. But by the second half, everything - the shapes, the backgrounds, the dozens of different shades of red and black - gets monotonous.

The dubbing is okay, with Anjan Srivastava and Mahesh Manjrekar as the rival ant kings, and Ashish Vidyarthi as Ghunn. One very grown-up characteristic of this movie is the music, by Jeet Ganguly. The songs are very Bollywoodish, and if there were a Hrithik or a Rani Mukerji instead of drawings in the song sequences, they would have been perfectly in context. Shaan supposedly had a blast recording "Cham Cham", and it shows. "Jhil Mil" is a nice, filmy duet. Ustad Rashid Khan's classical "Ghanana Ghanana" must be the best composed tune in the film.

The hand-drawn frames, the colours and the general level of activity in the film - the experience is a little bit like reading a Tinkle comic - if that is fun for you or the kids, C2B2 will work out alright. Catch it early, for it might soon be too late.
Share. Save. Connect.
Tweet
CHEENTI CHEENTI BANG BANG SNAPSHOT

ADVERTISEMENT
This page was tagged for
Cheenti Cheenti Bang Bang hindi movie
Cheenti Cheenti Bang Bang reviews
release date
Asrani, Ashish Vidyarthi
theatres list
Follow @fullhyderabad
Follow fullhyd.com on
About Hyderabad
The Hyderabad Community
Improve fullhyd.com
More
Our Other Local Guides
Our other sites
© Copyright 1999-2009 LRR Technologies (Hyderabad), Pvt Ltd. All rights reserved. fullhyd, fullhyderabad, Welcome To The Neighbourhood are trademarks of LRR Technologies (Hyderabad) Pvt Ltd. The textual, graphic, audio and audiovisual material in this site is protected by copyright law. You may not copy, distribute, or use this material except as necessary for your personal, non-commercial use. Any trademarks are the properties of their respective owners. More on Hyderabad, India. Jobs in Hyderabad.