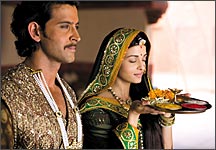 EDITOR RATING
5.0
Performances
Script
Music/Soundtrack
Visuals
NA
NA
NA
NA
Suggestions
Can watch again
NA
Good for kids
NA
Good for dates
NA
Wait to rent it
NA
Arguably the thing that impacts you more in Jodhaa Akbar than the story itself is the period it is set in - the social structure appears so cruel, and the utter lack of technology makes you wonder how miserable it must have been to live (and if you are in a philosophical enough mood, you can even start wondering what the meaning of life is when there is so little premium on it, and when tragedy is merely a commodity). But then that is perhaps exactly how our age will seem if a period film were made 500 years later.

But yes, like we all know, Jodhaa Akbar is primarily a romance. And the summary is, it would have been much more interesting to see a talented person like Ashutosh Gowarikar make a romance set in this day and age, given we immensely enjoyed whatever was there in even Swades.

People are more likely to enjoy contemporary romances, so there should be some reason to make a period romance - either that the period context plays a part in making the romance more appealing or brings specific nuances to it, or that it is a popular story that people might want to see on screen. Both these reasons do not hold with Jodhaa Akbar.

Gowarikar himself says that 70% of the movie is fiction the story-writer came up with, and none of us has ever heard of anything about Jodhaa and Akbar, so the latter reason does not hold. Then, the specific nuances that the period and context of the Jodhaa-Akbar tale would bring are an inter-religion marriage, and the marriage of an Emperor. Except for a few scenes in the first half, the tale doesn't revolve around the Hindu-Muslim angle much (come to think of it, the tale doesn't revolve much around anything). So it's hard to see what the significance of using Akbar and Jodhaa is - it could have been about any king falling in love slowly.

So what was Gowarikar's purpose - merely making a period romance using royals? And why would that be more appealing than a contemporary romance?

The problem with Jodhaa Akbar is actually not much to do with the period part - it is with the romance part. It is just an averagely scripted romance, period backdrop or no period backdrop. The emotional depth isn't there, there are too few interactions and conversations between the couple, and there are no really intelligent or gripping scenes or dialogues. Think the romance, for instance, in the Venkatesh-Asin Gharshana that made you wish they dedicated more reels to it. There's nothing in Jodhaa Akbar's romance that you would remember a few moments after it ends, given the fact it's hyped so much and took so long to make.

Indeed, the test of a good romance is simple - you should want to watch it again and again, especially if it's not a tragedy. If you feel like watching Jodhaa Akbar again and again, we want to see what you look like.

Add to it language difficult to understand, a lot of other stuff happening that you can neither follow nor are interested in following, rather ordinary sets (either that, or Sensation's projectors aren't great - but we think it's either that), and l-o-n-g duration, and the deal gets tough to swallow.

The tale, if you want to know, is of Jodhaa (Aishwarya Rai), a Rajput princess, being given in marriage to the Mughal Emperor Akbar (Hrithik Roshan), in what is basically a deal to end fueding between the Mughals and the Rajputs. Jodhaa does not like it at all, and the movie deals with how she falls in love with Akbar slowly in the days after marriage due to his fairness to her. Interspersed are a lot of plotting and battles for power by local kings and wannabe kings.

A R Rahman's tunes are brilliant, especially the awesome Khwaja. That's arguably the only good thing about Jodhaa Akbar, unless you find Hrithik or Aishwarya irresistable. The length can truly bore you. And as for the battle scenes, we have seen too many Hollywood war movies, and especially after the Lord Of The Rings trilogy, it is hard to be impressed by anything anymore. Sure, Bollywood does not have those budgets, but that only makes it unfortunate, nothing more.

And no, the fights don't look realistic - there are too many instances when a sword swish could have really taken a limb with it but doesn't. And that Akbar Jodhaa fight - how come neither of them suffers even a scratch when they are battling so furiously, and without armoured suits? And of course, how do they have the guts to do it?

Jodhaa Akbar is worth a watch mostly if you like to sit in theaters for twice the duration for the same money. Hopefully that's not a compelling proposition for you.
Share. Save. Connect.
Tweet
JODHAA AKBAR SNAPSHOT

I think it was the most awaited movie (atleast for me) as the curiosity built around the star cast and the story which was under scrutny o istorians since it was anounced. Some said it was a publicity stunt and some the story is not true but whatever it is the movie has collected huge amount of money. Whether the controversy about the existence of jodha as the Akbar's wife had a conclusion or not didn't effect the success of the movie. The two leading pair have fit to their roles and the romance between them clicked.

Did jodha ever exist? If she existed,was she is wife of Akbar?or daugter in law?

All these questuons got wrapped up in the history books. Arey bhai who has that much time to see, check and verify all this. 4 hrs ka picture kohi dekh nahin paa rahen hain.


RATING
7
Manjunath Ulli on 19th Mar 2008, 10:58pm | Permalink
good one
RATING
2
Abhijeet Upadhyay on 29th Feb 2008, 4:10pm | Permalink
awesome work by ashurosh gowarikar
RATING
10
K K on 29th Feb 2008, 3:09pm | Permalink
this is for "Akbar The Great" i think u must have got the answer by know from other comments. mr.Reviewer i know that its u....
RATING
8
Shiva B on 23rd Feb 2008, 10:20am | Permalink
Picture is superb and is worth every penny you pay for it to watch. Without any bias let us appreciate the director for the efforts he put in.
RATING
8
Kssk on 22nd Feb 2008, 9:38am | Permalink
The film is good. The sets are awesome, Hrithik Roshan is good. Aishwarya Rai Bachchan is good. The dailogues in the movie are good(pure urdu and pure hindi... may be that is one good reason to have such a backdrop). A R Rehman proves himself again. All the songs are well pictured.
RATING
8
Amit Shah on 21st Feb 2008, 11:17pm | Permalink
Its a nice. Enjoy!! Kyaka!!!
RATING
8
Akbar The Great on 19th Feb 2008, 5:34pm | Permalink
This is for KK. you have a skewed-up/scrwed-up understanding of movie-making. I dont know your name and i dont even want to know it. You are just a pseudointellectual Bollywood obsessed freak. Go watch the film again and take your brain this time. Maybe you
RATING
2
K K on 19th Feb 2008, 1:59pm | Permalink
Film is ok and i think Bombay Beauty is either the Reviewer himself or a close relative of him..
RATING
6
Thirush Hazare on 19th Feb 2008, 6:16am | Permalink
This one is again the boring film of the year first half such a boringgggg
and very long its 2 hours and second half 1:45 minutes
RATING
2
Bombay Beauty on 17th Feb 2008, 6:35pm | Permalink
Jodhaa Akbar is an epic bore athough it
RATING
2
Satish Satish on 17th Feb 2008, 4:31pm | Permalink
I did not watch the movie yet. And, I think this is a fair review.

Reshma - It is a racist remark to suggest full hyd folks not to review hindi films and that they may not uderstand a film. Think about it. And, If you don't like a review, skip that review and go with some other review that resonates better with your frequency.

ADVERTISEMENT
This page was tagged for
job Jodha Akbar Hindi movie
is jodha Akbar movie boring
hindi movie jodha
jodha akbarreview
jodhaa akbar full movie hindi
Follow @fullhyderabad
Follow fullhyd.com on
About Hyderabad
The Hyderabad Community
Improve fullhyd.com
More
Our Other Local Guides
Our other sites
© Copyright 1999-2009 LRR Technologies (Hyderabad), Pvt Ltd. All rights reserved. fullhyd, fullhyderabad, Welcome To The Neighbourhood are trademarks of LRR Technologies (Hyderabad) Pvt Ltd. The textual, graphic, audio and audiovisual material in this site is protected by copyright law. You may not copy, distribute, or use this material except as necessary for your personal, non-commercial use. Any trademarks are the properties of their respective owners. More on Hyderabad, India. Jobs in Hyderabad.