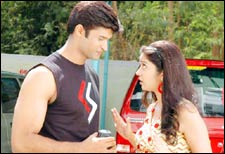 Deepa Garimella / fullhyd.com
EDITOR RATING
3.0
Performances
Script
Music/Soundtrack
Visuals
6.0
3.0
5.5
3.0
Suggestions
Can watch again
No
Good for kids
No
Good for dates
No
Wait for OTT
Yes
Shreya (Swathi), the doting daughter of a single mother (Delhi Rajeswari), dreams of making it big in the field of music, and performs at a restaurant for pocket money. Normally the only thing you'll get if you're a singer at a restaurant is a free meal on alternate days. Shreya is luckier - the guests clap loudly when she sings, and sing when she sings, and many times actually listen when she sings.

Shreya is thus generally smug about her mediocre talent, till one day, Rao (Vikram Gokhale), an elderly Carnatic singer, happens to listen to one of her songs at the restaurant. The old man humiliates her in front of the entire crowd, because according to him, she doesn't have a clue of what real music is. Only, Rao is a man who looks, talks and acts like he doesn't have a clue of what the real world looks like after 1938. Which is a pity, because both Sankarabharanam and Sagara Sangamam, the gems from which this film has borrowed remorselessly, were released decades later.

To Shreya's list of non-fans gets added an NRI, Sreenu (Kamal Kamaraju), who she has a huge crush on. He too thinks Shreya doesn't know much about music, and that she should take classes if she ever wants to achieve her goal of auditioning with A R Rahman. And according to him, Rao is the best guru in town.

Shreya uses up her entire reserve of humility in half a conversation with the guru, and neither does she have tact in much greater measure. This time, she does turn to Viswanath. She takes up the role of the domestic help in Rao's household, eventually softens the old man's heart, and ends up taking lessons.

A twist or two later, we have the soulless ending, in which Rahman does play a crucial role despite his absence. We doubt if the man would have recovered from the stitch in his sides by now.

Kalavaramaye is a mish-mash of confused sensibilities. On one hand is the contemporary romance between Shreya and Sreenu, and on the other is the old-world aspect of the musician and his passion. The former ends up half-baked, and the latter is completely overshadowed by the makers' lame attempts to replicate K Viswanath's work, without even blending it in with the rest of the film. Couple this with poorly written characters, and you know you're going to end up with a headache, about 3 minutes into the film.

Swathi is vivacious, but we doubt if what she's doing can be classified under â€˜acting'. She hasn't really moved on from the chipper college canteen talk that won her her original fan base. However, she has handled her weeping scenes quite well. As for Kamal Kamaraju, someone should tell him he's not in a photo shoot - he's supposed to move around and at least pretend to act if he's in a film.

Vikram Gokhale tries to do what he did in Hum Dil De Chuke Sanam, but is a poor shadow of Viswanath's iconic characters, and part of what ruins his show is S P Balasubrahmaniam, who must count this as one of his lousiest dubbing jobs ever.

But the prize catch of the film is Tanikella Bharani, who's exceptionally brilliant in his role as Rao's aide - it makes you wish someone made a film with him playing the lead.

Except for the amazing title song that ends in the first ten minutes, and a fairly impressive 90s-style tragic stage song in the end, the compositions are absolutely nothing that a film based on music can hope to boast of. Technically, too, the film has been taken very poor care of - the visuals certainly look like the film came from the 80s.

ADVERTISEMENT
This page was tagged for
Kalavaramaye Madilo telugu movie
Kalavaramaye Madilo reviews
release date
Swathi, Kamal Kamaraju
theatres list
Follow @fullhyderabad
Follow fullhyd.com on
About Hyderabad
The Hyderabad Community
Improve fullhyd.com
More
Our Other Local Guides
Our other sites
© Copyright 1999-2009 LRR Technologies (Hyderabad), Pvt Ltd. All rights reserved. fullhyd, fullhyderabad, Welcome To The Neighbourhood are trademarks of LRR Technologies (Hyderabad) Pvt Ltd. The textual, graphic, audio and audiovisual material in this site is protected by copyright law. You may not copy, distribute, or use this material except as necessary for your personal, non-commercial use. Any trademarks are the properties of their respective owners. More on Hyderabad, India. Jobs in Hyderabad.