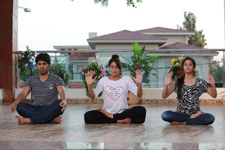 Kritika Deval / fullhyd.com
EDITOR RATING
5.0
Performances
Script
Music/Soundtrack
Visuals
4.0
3.5
5.0
6.0
Suggestions
Can watch again
No
Good for kids
No
Good for dates
No
Wait to rent it
Yes
We're soooooooooo glad Tollywood has finally given us such a (buzzword-overload alert) fresh, youth-oriented, new story! Just get a load of this plot, like, seriously!

So, Sirish (Allu Sirish) and Suvarna (Regina Cassandra) are two contrary and ambitious people with attitude issues. They end up working together, and are extremely successful, as sang by various montages.

Meanwhile, Sirish, who wants to be more successful, decides that the best way to get Suvarna to cooperate is by manipulating her ovaries into falling in love with him. Suvarna finds out and gets out of the team. They both start their own ventures, which compete with each other and fail miserably. It is now upto those around them to get these two crazy kids back together.

Have you ever heard of such a mind-blowing sequence of events? Can you even imagine... Wait. What?!? You have? Here, here and here? Oh. Well, then you have to give credit for the film's fresh sense of humour. Everything they do is so very funny!

Like, when the hero first meets the heroine, who happens to be the creative director of their TV network's Chennai chapter, Sirish, who used to work at the Mumbai branch before the two got called to Hyderabad, immediately asks Suvarna how she got the job because women are so bad at creativity. That has to be a joke, right? Because even if they are going all sexist, isn't the stereotype that women are good at creativity and that men are good with the logical shit?

Also, Suvarna's and Sirish's first project as part of their plan to inject enthusiasm into the channel is to get people married on live TV. Like, inter-caste and inter-religious marriages that don't meet society's approval. Let us, for a minute, tighten the belt on our already suspended credulity, and assume that this is indeed a good idea. But, it doesn't stop there. We're also supposed to believe that these two got all the way through approvals, casting, logistics and funding, and to the sets, without any interference from the management.

Then, there is the fact that these people picked up the first two people having trouble getting hitched at Arya Samaj, and don't bother finding out more about the couple than their first names because that would mean depriving the "plot" of... something, apparently.

As this writer's more knowledgeable co-watcher pointed out, what happens after the first show is the joke, and not the fact that our protagonists, the two people we spent 150 bucks apiece to watch, have the wits of headless chicken.

Oh, BTW, both of them are selfish. How do we know that? Because it is written in the film previews on Wikipedia et al, because everybody in the film including the hero and the heroine keep saying it, because they even have a background track that goes "selfish, selfish", until we're pretty sure there's a subliminal message there that has fundamentally changed how we function without us knowing about it.

Unwieldy plot and unfunny "humor" aside, director Maruthi has made it abundantly clear how out of touch he is with today's youth despite his repeated attempts at reaching out.

Allu Sirish gives a wooden performance, while Regina, who shows potential, takes over the other end of the spectrum, expressing like every facial muscle of hers has epilepsy. In all fairness, this is probably the result of the fact that Maruthi seems unable to deal with sane, balanced characters, as is evinced by performances of normally spot-on actors like Posani, Sapthagiri and the rest.

Every character is a stereotype that doesn't even attempt to hide its flat nature (heh! wordplay!). The music is mediocre. The cinematography, however, is lovely, with every frame taking on a polished sheen.

In all, you can probably go through all of your options this weekend before you fall back on this cut-and-paste project. We get it. Summer doesn't leave you with much to do.
Share. Save. Connect.
Tweet
KOTHA JANTA SNAPSHOT 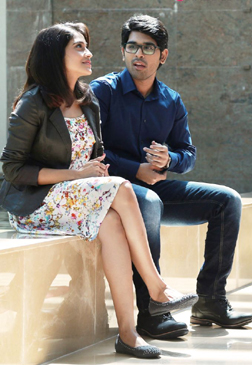 ADVERTISEMENT
This page was tagged for
kotha janta review
Kotha Janta telugu movie
Kotha Janta reviews
release date
Allu Sirish, Regina Cassandra
Follow @fullhyderabad
Follow fullhyd.com on
About Hyderabad
The Hyderabad Community
Improve fullhyd.com
More
Our Other Local Guides
Our other sites
© Copyright 1999-2009 LRR Technologies (Hyderabad), Pvt Ltd. All rights reserved. fullhyd, fullhyderabad, Welcome To The Neighbourhood are trademarks of LRR Technologies (Hyderabad) Pvt Ltd. The textual, graphic, audio and audiovisual material in this site is protected by copyright law. You may not copy, distribute, or use this material except as necessary for your personal, non-commercial use. Any trademarks are the properties of their respective owners. More on Hyderabad, India. Jobs in Hyderabad.