Kritika Deval / fullhyd.com
EDITOR RATING
3.5
Performances
Script
Music/Soundtrack
Visuals
5.0
3.0
4.0
6.0
Suggestions
Can watch again
No
Good for kids
No
Good for dates
No
Wait to rent it
No
Meet Abhijeet Patil (Sachiin Joshi), a cop with a taste for women, coke (the kind that comes in powder form), gambling, and the obvious.

Take, for instance, this dialogue between our hero and his reporter girlfriend Jia (Vimala Raman), when Abhijeet wakes up in her bed after a night of drunkenness.

Jia, smiling for some unfathomable reason: Haan, tum bohot nashe me the.

No shit, Sherlocks! This is exactly the sort of IQ we need in people who protect and document our society.

The lines draw sudden bursts of laughter from this writer, inviting stern stares from the middle-aged man down the mostly empty row. Then, in a moment of contemplation, she realizes that they probably weren't meant to be funny. Soon into the movie, though, realization dawns that there is much to contemplate.

Why, for example, would a reporter, who has a video clip of an almost-confession-of-murder from a cop, be content with staring at the screen and saying "Iss bande me kuch baat hai. Tumhe nazar aa rahi hai woh baat?"

Why exactly did these guys need to make a movie so long that they needed to put in lengthy and boring chess sessions to fill up time?

How incompetent can the writer be when the "suspense" in a suspense thriller needs to be revealed via awkward conversations between the hero and the villain?

If the above diatribe still hasn't discouraged you, well, here's the plot.

Abhijeet Patil is a cop who likes his khakhi mixed with shades of gray. He shares a hate-hate relationship with "don" Shetty (Prakash Raj), and a love-hate relationship with Shetty's moll Rani (Gihani Khan). Shetty opens a dance bar, and Patil gets it shut down. Shetty gets Patil's friend killed off. Patil snorts cocaine, goes berserk, and kills a bunch of people, leading to his own suspension.

Meanwhile, hardcore reporter chick Jia flits around looking pretty and trying to hard to justify her existence. In all of this, there's something about a cop-underworld drug-dealing cartel, and a bookie, and Patil's corrupt wife-beating uncle, and, lest we forget (don't we wish!), countless disturbing item numbers. Then Shetty goes and opens another dance bar, and this time, Patil becomes the bouncer.

Wondering how that happened? Don't worry. These guys are extremely considerate, and don't leave anything to guesswork and imagination. Apparently, in Mumbai's seedy underbelly, anyone who cooks up a plot narrates all of it to the very person against who the plot is directed, within five minutes.

Sachiin Joshi could've pulled off the role of the dissolute cop, if he could've made his act less contrived. The women in the movie are much better when not acting. Prashant Narayan is wasted in a role that need not have existed in the first place.

Prakash Raj, who occupies the screen for quite a while, has more talent than all of the other actors put together, even while he sleepwalks through his role.

The cinematography and editing are uneven, jagged and hammy at times, and very slick at others.

The music simply prolongs an ordeal that is too long to begin with.

Mumbai Mirror is one of those hundreds of stories that could've done so much better in more efficient hands. As things stand, it was probably better off untold.
Share. Save. Connect.
Tweet
MUMBAI MIRROR SNAPSHOT 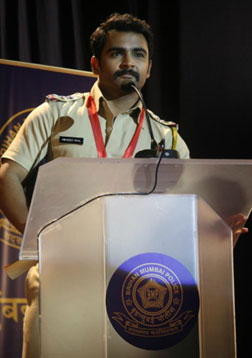 ADVERTISEMENT
This page was tagged for
Mumbai Mirror hindi movie
Mumbai Mirror reviews
release date
Sachiin Joshi, Gihani Khan
theatres list
Follow @fullhyderabad
Follow fullhyd.com on
About Hyderabad
The Hyderabad Community
Improve fullhyd.com
More
Our Other Local Guides
Our other sites
© Copyright 1999-2009 LRR Technologies (Hyderabad), Pvt Ltd. All rights reserved. fullhyd, fullhyderabad, Welcome To The Neighbourhood are trademarks of LRR Technologies (Hyderabad) Pvt Ltd. The textual, graphic, audio and audiovisual material in this site is protected by copyright law. You may not copy, distribute, or use this material except as necessary for your personal, non-commercial use. Any trademarks are the properties of their respective owners. More on Hyderabad, India. Jobs in Hyderabad.