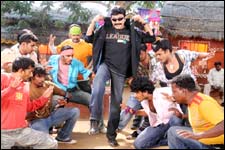 EDITOR RATING
2.5
Performances
Script
Music/Soundtrack
Visuals
6.0
2.0
3.0
4.0
Suggestions
Can watch again
No
Good for kids
No
Good for dates
No
Wait to rent it
No
Sivaram (Rajasekhar) is a lawyer with a past that's killing him. Well, almost all lawyers have pasts that would make you want to kill them, but Sivaram's present is worse - he drinks so much, Seagram and Bacardi would compete to lay a direct pipeline to his home even if it had to pass through Iran and Afghanistan.

In his free time Sivaram keeps beating up random people brutally, many times without their permission. He also hates his parents (Chalapathi and Annapurna) and brother Kishore (Banerjee). And anyone who knows them, and many who don't. Plus, some more people, other people who know them, many who don't, God, and himself. In fact, he hates more people than any other actor in history, with the possible exception of Posani Krishna Murali.

Just as you are starting to tentatively think that perhaps there is a story behind all this, enters Parvati (Bhoomika), a rich heiress who is kidnapped by some goons. She calls a random number to ask for help. Now normally the worst thing that can happen when you dial a wrong number is that you reach an ICICI Prudential telecaller, who is unable to believe her luck. Parvati's luck is only slightly better - she reaches Sivaram who is in a semi-stupor and takes about 3 hours to figure out that she's in trouble, and another 3 hours to repeat that process just to see if he got it right the first time.

Anyway, he saves her, and realizes that the kidnapping was planned by her own family - he deduces this through some smart investigation, some brilliant intuition, some cool computer work, and mostly since she herself tells him the moment she's been rescued. He takes her to his home to protect her - his family is surprised since they hardly expect to see him with a woman. Is she his wife? Is she his girlfriend? Is she his daughter? Is she dumb to agree to be in a movie like this?

Parvati's rowdy family is, of course, searching for her, and they soon discover her at Sivaram's place. They ask Sivaram to return her to them since she is the rightful heiress to the family's property. Sivaram refuses saying every woman can be a heiress, but that does not give her the right to be returned. Or something like that. By this time you are more concerned about what this movie is all about, whether it will end, and what you have to do to ensure that.

Naa Style Veru is an unfocused, rambling movie that leaves you more confused after its end that you were before it started. If you were looking forward to just that kind of film, it's a rare opportunity that you should not miss - and they'll probably even share with you the first draft of this script, which most likely doesn't need page numbers, or even all pages.

Indeed, the whole Sivaram being a drunkard thread seems to have been shoehorned into the film, the mystery about Parvati's enemies seems to go on and on, there're no thrills in it, and the lack of any romance - or logic too in several places, like Parvati's rapidfire bonhomie with Sivaram's family, or Sivaram getting money for all his drinking without any sources of income - makes everything seem longer.

Rajasekhar has no style whatsover (so much for the movie's name), and looks like an '80s hero in his dressing. Bhoomika has so little to do, she probably charged lesser than her dupe would have. Though we believe the disastrous pairing with a much older looking Rajasekhar was the main reason her dupe refused the movie. Saikumar's dubbing for Rajasekhar gives an artificiality to the whole movie, given everyone knows it's Saikumar's voice. And the sad dialogue-writing and the average visual quality drive home the point. Luckily, there are very few songs, which you can forget without any permanent damage.

If you're still watching Naa Style Veru, let the newspapers and TV channels know - you just might get invited to a panel discussion or something.
Share. Save. Connect.
Tweet
NAA STYLE VERU SNAPSHOT

ADVERTISEMENT
This page was tagged for
Naa Style Veru telugu movie
Naa Style Veru reviews
release date
Rajasekhar, Bhoomika
theatres list
Follow @fullhyderabad
Follow fullhyd.com on
About Hyderabad
The Hyderabad Community
Improve fullhyd.com
More
Our Other Local Guides
Our other sites
© Copyright 1999-2009 LRR Technologies (Hyderabad), Pvt Ltd. All rights reserved. fullhyd, fullhyderabad, Welcome To The Neighbourhood are trademarks of LRR Technologies (Hyderabad) Pvt Ltd. The textual, graphic, audio and audiovisual material in this site is protected by copyright law. You may not copy, distribute, or use this material except as necessary for your personal, non-commercial use. Any trademarks are the properties of their respective owners. More on Hyderabad, India. Jobs in Hyderabad.