Josh / fullhyd.com
EDITOR RATING
6.5
Performances
Script
Music/Soundtrack
Visuals
8.0
6.0
5.0
7.0
Suggestions
Can watch again
No
Good for kids
Yes
Good for dates
Yes
Wait to rent it
No
For reasons best known to them, enough and more Indian parents (dads in particular) find it complete anathema to vocally or overtly express their love for their children. So you'll have to glean it from the expensive clothes they buy you and the extra time they work so that they can afford those clothes. Or the hearsay from their colleagues on how your dad wouldn't stop talking about your achievements in school, although when you excitedly go show him your trophy, he barely registers a syllable of acknowledgment.

It is this admirably fine point that Nenu... Sailaja sets as its fulcrum. Sailaja (Keerthy Suresh) shares nothing with her parents (Sathyaraj and Rohini) largely because she never knew she could. They love her to bits and work hard to provide for her. However, they don't express any of those emotions to her, and this invariably discourages the daughter from making similar communication.

With these broken channels of communication, parents and kid actively participate in the contest of "my-selflessness-hurts-most". So much that she'll mutely marry a guy of her dad's choice and readily abandon the poor bloke she has feelings for.

Poor bloke in question is Hari (Ram), a sorry son of a ...sweet lady, who gets friendzoned all his life by more girls than he'd care to count. Things finally seem to be falling in place with Sailaja until one day she mercilessly assaults him with this blunt instrument called filial duty. The rest of the film follows his attempts to salvage his situation by installing telegraph lines along the already existing sturdy bridges between dad and daughter.

And Ram lives up to the role rather well. The guy can act and he is rather charming when he's not being insufferably cocky (which is what is considered heroism nowadays, sadly). He does the ain't-heard-nothing-about-gravity fight sequences and the my-limbs-have-too-many-degrees-of-freedom dance sequences pretty well, but his strength appears to be the emotional scenes. Those work, and not least because of his efforts.

Naresh and Pragati (as Hari's parents) do well in their rather minuscule roles. But it is Sathyaraj and Rohini who bag the meaty characters of the emotional but vocally tied up parents. Lovely performances, those. Pradeep Rawat manages to make you laugh, but only intermittently. And there end the good parts of the film.

Everything else about the movie draws up mixed feelings. The film isn't badly written, but it isn't well-written either. The same goes for the direction. A number of directorial choices appear naive, and you can't really blame a debutante (Kishore Tirumala) too much. But there is that nagging feeling that Nenu... Sailaja could have been a far better film in the hands of better talent.

The general feeling towards the rest of the departments is one of "it's all right but nothing that merits discussion". DSP's songs, in particular, make no ripples at all. The background score works, though.

And that isn't to say that Keerthy Suresh does a bad job. However, you have to consider the role - a girl who isn't comfortable with expressing her feelings despite abundant possession of said feelings. A muted expression of sorts is needed, and a layered character like that needs a certain heft that the poor girl hasn't yet got on her vitae. She is gratifyingly not exaggerated, and manages quite some talking with her eyes, and that's more than you can ask for from most girls in movies.

So that brings us to file the film under the good old Great-Concept-Sorry-Execution head. There. That is yet another sad failure of communication. Your decision to watch would greatly depend on how well your receiver is functioning, and also on how unoccupied it is.
Share. Save. Connect.
Tweet
NENU SHAILAJA SNAPSHOT 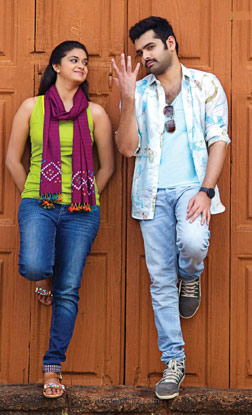 See Nenu Shailaja full details
TOP COMMENT
Josh on 3rd Jan 2016, 5:43pm | Permalink
I couldn't get past ten pages of Midnight's Children. It felt like Rushdie was actively telling his readership to work hard to process his writing. So when he uses a word like pulchritude, I feel he's being a pompous arse.

This is the kind of writing I aspire to. Where I manage to speak my mind to my reader even if a couple of words seem unfamiliar. But then, that is work in progress.
4
0
NENU SHAILAJA USER REVIEWS
1 - 3 OF 3 COMMENTS
POSITIVE  |  NEGATIVE  |  NEWEST  |  OLDEST  |  MOST HELPFUL  |  LEAST HELPFUL
venkat Nikhil on 1st Jan 2016, 8:20pm | Permalink
I like your reviews JOSH...but this has a few tough words like filial duty and anathema etc...You should have gone a bit easy on your English skills...its just my personal opinion though...
Josh on 2nd Jan 2016, 12:27am | Permalink
Feedback appreciated and duly noted. And thanks, Nikhil :)
The Common Movie Goer on 3rd Jan 2016, 7:43am | Permalink
I don't think you should cut back on those words, Josh. Helps us learn, and maintains fullhyd standards. Again, personal opinion only. To each, his own.
Josh on 3rd Jan 2016, 5:43pm | Permalink
I couldn't get past ten pages of Midnight's Children. It felt like Rushdie was actively telling his readership to work hard to process his writing. So when he uses a word like pulchritude, I feel he's being a pompous arse.

This is the kind of writing I aspire to. Where I manage to speak my mind to my reader even if a couple of words seem unfamiliar. But then, that is work in progress.
Dr. Vijayasarathi on 4th Jan 2016, 4:40pm | Permalink
Josh! I understand you are very good at English. But I feel it is not a forum to show your/our English writing skills. What is needed here is to express the feelings/comments/opinion on the movie in simple words. The meaning of language is it should be understandable even for a kid. I personally write many papers to international journals and use very simple English without any hard words and my articles are accepted in many journals with good appreciation. So, please keep it simple and understandable to the public. You don't need to go and verify a dictionary hardcopy/online for reading the articles. For example look at the language of Indian Express and The Hindu papers. Wasn't that a beautiful language? Think about it.
rahulsachinsourav123 on 10th Jan 2016, 12:10pm | Permalink
For all those who are commenting about the complex verbiage used, how many words are you guys looking at, in the entire review, 2 or 3 may be? See, it depends on the vocabulary capabilities of readers which may range from too many to too few which is very very subjective. And we can't ask reviewer to come up with a language which is 100% understandable to 100% public. I don't think any of the reviews in this world can meet this demand.

Personally I am great fan of reviews of Josh, Ravi Kandala and Kritika who just don't go about writing reviews like any one else but blends lot of fun, creativity and constructive criticism into their reviews which may call for couple of words here and there which may make us refer to dictionary. I think we should look at this as learning opportunity and get on with it instead of pushing reviewer to alter what they are good at. This is what makes fullhyderabad reviews unique in lot of ways, which we shouldn't tamper with.
Nr on 3rd Jan 2016, 12:31pm | Permalink
As 'The Common Movie Goer' said don't tone down. Now you have online dictionaries also.
Nr on 3rd Jan 2016, 12:33pm | Permalink
Don't you think it's good opportunity to learn... now you have online dictionaries also...
Venkat Nikw on 5th Jan 2016, 11:48am | Permalink
So we need to keep an English dictionary ready before reading a review on this site
Hari on 1st Jan 2016, 9:13pm | Permalink
>>>>
you can't really blame a debutante (Kishore Tirumala)
>>>>
FYI, he isn't a debutante. He directed another (very decent) movie named Second Hand.

ADVERTISEMENT
This page was tagged for
Nenu Shailaja telugu movie
Nenu Shailaja reviews
release date
Ram Pothineni, Keerthi Suresh
theatres list
Follow @fullhyderabad
Follow fullhyd.com on
About Hyderabad
The Hyderabad Community
Improve fullhyd.com
More
Our Other Local Guides
Our other sites
© Copyright 1999-2009 LRR Technologies (Hyderabad), Pvt Ltd. All rights reserved. fullhyd, fullhyderabad, Welcome To The Neighbourhood are trademarks of LRR Technologies (Hyderabad) Pvt Ltd. The textual, graphic, audio and audiovisual material in this site is protected by copyright law. You may not copy, distribute, or use this material except as necessary for your personal, non-commercial use. Any trademarks are the properties of their respective owners. More on Hyderabad, India. Jobs in Hyderabad.