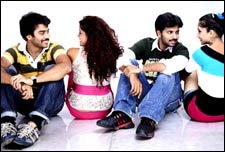 Deepa Garimella / fullhyd.com
EDITOR RATING
3.0
Performances
Script
Music/Soundtrack
Visuals
2.0
2.0
5.5
5.0
Suggestions
Can watch again
No
Good for kids
No
Good for dates
No
Wait to rent it
No
Bindu (Pia) and Chandu (Chaitanya) are a couple. Abhiram (Santosh) and Deepa (Deepa) are a couple. This is how the film begins. This is how it ends, too. That looks like a circle, we know. In any case, circles are all you'll see in front of your eyes, once you watch Ninnu Kalisaka. Little ones, of all colours, everywhere you look.

These two couples live separate existences for the first 5 minutes, and you don't see the circles then, just a bunch of squares saying goodbye at the airport. Then, Bindu travels abroad for a project. Abhiram travels abroad for a project. They fly in the same plane. They work in the same office. And they also discover that they live next door to each other. The circles begin to appear now.

The relationship becomes slightly more dynamic once Abhiram and Bindu become friends. Bindu cooks dal for him. Abhiram eats the dal. She lends him her umbrella. He feels it up at the spot where she had held it. Abhiram celebrates her birthday. She wears the dress he gifts her. With so much happening, the youngsters seem all geared up to do the unthinkable - do some acting. But this is something that's so unthinkable, even the director never thought of it. So nothing of the sort happens.

But wait. The second halves of these cracked eggshells are begging for attention. Chandu is a stage actor who likes poetry and hangs out with a dozen rusty bums who, we are told, are all part of his theatre group. Deepa is a chirpy NIFT graduate who's all rose and sunshine about life. Their paths cross when their bags get exchanged at a music store, and ever since, they keep hanging out at a coffee shop with their friends and having fun.

Chandu and Deepa also keep in touch with Bindu and Abhiram, respectively. Keeping in touch is not a problem, since mobile rates have come down, and the kind of conversations that the couples have can be had by anyone with a mobile phone and a license to talk to oneself. Moreover, according to Ninnu Kalisaka, India and the US are in the same time zone.

Chandu and Deepa end up entering a drama contest together. The play is a tragic love story, so naturally, there's a lot of 'close contact'. Seeing their amazing chemistry, the judge thinks they're a couple. It's not his fault - anyone who judged a show like that is bound to see double of everything.

But no, they're not a couple, they clarify. They're just good friends who are each committed to other people, but they're equally committed to friendship, but that again doesn't mean that they're committed to each other.

Cut to the scene abroad, which is infested with dumb foreigners with fake accents, and xenophobic Telugus cracking bad jokes. The project is done with, and Bindu and Abhiram have to come back home. The thought leaves them haunted for the rest of the flick. No decent home would take them back, given that their first career move was this movie.

On the flight back, Abhiram chats up with Jagapati Babu (who's playing himself), and decides that a movie star is the best person to tell his problems to. He confesses that he loves this girl even though he already has a girlfriend, and that he's confused. Jagapati Babu offers him some advice on a piece of paper.

Chandu and Deepa are waiting at the airport, and upon landing, there's much hugging and lots of excited talk, and two forlorn gazes. This is the last lap of the circle. Everything soon comes back to sanity, just the way it should have been - the lights are back on, and you're going home.

Ninnu Kalisaka deals with a very valid issue of extra-relationship (for want of a better word) infatuation, but it's not the kind of production that can deal with anything beyond getting people together in front of the camera. There's no effort that has gone into the writing, and the story is just an aggregation of clichÃ©s from all over the place. The comedy falls flat, too, both owing to bad lines as well as inept performances.

The performances speak of a lack of basic backstage effort. The newcomers aren't very able, and neither is the supporting cast, that's inundated with unidentifiable faces. The girls are pretty, though. M S Narayana and Master Bharat have a ho-hum comedy track.

Though the film is colourful, there's no great camera work here, and the songs even have some cheesy graphics. As for the songs, there's a bit of an effort to rise above the ordinary, but there's nothing to make you want to be in the dancers' shoes.

On the whole, a movie strictly for the birds. And for the circles.
Share. Save. Connect.
Tweet
NINNU KALISAKA SNAPSHOT

See Ninnu Kalisaka full details
NINNU KALISAKA USER REVIEWS
1 - 3 OF 3 COMMENTS
POSITIVE  |  NEGATIVE  |  NEWEST  |  OLDEST  |  MOST HELPFUL  |  LEAST HELPFUL
USER RATING
7.0
3 USERS
Performances
Script
Music/Soundtrack
Visuals
7.7
5.3
7.7
7.7
Can watch again - Yes
Good for kids - Yes
Good for dates - Yes
Wait to rent it - Unsure
venkat on 3rd Oct 2009, 11:17am | Permalink
This film with newcomers in the lead roles can be watched once if you dont have anything to do and definitely better than the recent two movies Rechipo in Telegu and Do not Disturb in Hindi made by big banners with big stars

ADVERTISEMENT
This page was tagged for
Ninnu Kalisaka telugu movie
Ninnu Kalisaka reviews
release date
Santosh, Chaitanya
theatres list
Follow @fullhyderabad
Follow fullhyd.com on
About Hyderabad
The Hyderabad Community
Improve fullhyd.com
More
Our Other Local Guides
Our other sites
© Copyright 1999-2009 LRR Technologies (Hyderabad), Pvt Ltd. All rights reserved. fullhyd, fullhyderabad, Welcome To The Neighbourhood are trademarks of LRR Technologies (Hyderabad) Pvt Ltd. The textual, graphic, audio and audiovisual material in this site is protected by copyright law. You may not copy, distribute, or use this material except as necessary for your personal, non-commercial use. Any trademarks are the properties of their respective owners. More on Hyderabad, India. Jobs in Hyderabad.