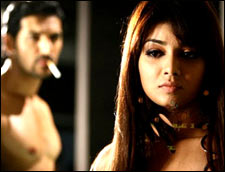 Ravi Mundoli / fullhyd.com
EDITOR RATING
7.0
Performances
Script
Music/Soundtrack
Visuals
NA
NA
NA
NA
Suggestions
Can watch again
NA
Good for kids
NA
Good for dates
NA
Wait for OTT
NA
No Smoking is about tobacco addiction in the same way that Murder was about murder. Cigarettes and smoke are present in more or less industrial quantities in the former, and the latter does show one homicide. But the murder in Murder was entirely incidental, just a plot device on which the director could hang Mallika Sherawat's clothes.

The difference between Murder and No Smoking is that in one, the audience knew exactly what they were getting (Ms. Sherawat), and didn't have to do any thinking on their own. With their heads, anyway. No Smoking is a very different kettle of fish.

Anurag Kashyap lets the movie go into free fall (especially in the second half), and almost petulantly refuses to do your thinking for you, merely presenting scene after carefully sculpted scene, and you have to sit in the darkness and wonder what it's all about.

The laconically named K (John Abraham) is a high-flying, narcissistic, Howard Roarkian MCP (as his car number plate testifies) in some unspecified profession. His relationship with his secretary Anjali (Ayesha Takia) who moonlights as his wife is precariously poised - she is on the verge of stubbing out their marriage mainly because she can't take his chain-smoking any more.

When Abbas Tyrewala (Ranvir Shorey), who introduced K to nicotine in their childhood, claims that he (Abbas) quit smoking after going through a "course" with the mysterious Sri Sri Sri Baba Bangali Sealdahwaale (Paresh Rawal), K is persuaded to check out said Baba's establishment.

This turns out to be in a virtual (or is it real?) parallel universe in the bowels of a Dharavi-ish slum, lurking below a warren of seedy and decaying tenements. Ostensibly to save his marriage, K descends physically and metaphorically from his sleek, wealthy world of softly lit apartments and artsy offices into a gritty hellhole where he needs to sign contracts he can barely comprehend, with the enigmatic Baba, merely to survive.

No Smoking catches you off guard by degrees. For about 2 minutes near the beginning, you may actually think the movie is about the ills of smoking. Once you follow K into Bangali's burrow, a whiff of mystery/thriller creeps in, and pretty soon you're wondering whether it's actually a sci-fi flick. And that's just the first half.

Thanks to the fantastic quality of the visuals, and the generally absorbing progression (storyline would be the wrong word) of No Smoking, the acting didn't exactly need to be superlative. That being said, John Abraham is really quite good. While you start off with no sympathy for K and his egotism, his fall from grace is scripted and acted so well that by the end you actual feel for the poor sod. Paresh Rawal as the Baba is also more than competent, but then again the credit must lie in equal measure with the scripting.

Visually, No Smoking ranges from merely very unusual to stunningly unusual, by Bollywood standards. In 1987, 'dream sequence' meant Sridevi wrapped in Garden Vareli gyrating under a sprinkler and the unsurprisingly dumbfounded gaze of Mr. India.

20 years and many dhak dhaks later, you have a Siberian landscape with a bathtub and a pack of cigarettes lying in the snow. K is incarcerated inside a dirty grey/brown building, with only a TV showing the news in incomprehensible Russian (although you can catch snippets of "Maria Sharapova" and "Sania Mirza" if you're listening carefully) for company. There's nary a puff in the offing. Out of desperation, he smashes his way out and dashes madly across the tundra, while a Soviet style security guard pumps bullet after bullet into his receding back. Whew.

There are quite a few notes that jar. For what essentially seems to be a serious and deeply personal movie, there are several annoying "homage" moments and references to Hollywood and Bollywood. Case in point, Tyrewala (who shares his name with a Bollywood scriptwriter) on the phone: "Arrey Maqbool, main hoon na?" Or "Bidi jalaile ke vishal desh mein something something ka gulzar laaye hain." Unnecessarily juvenile, we thought. Even Johnny Gaddaar which was all about homage and tribute wasn't this randomly unsubtle.

If you are chummy with terms and phrases such as "Kafkaesque", "surrealism", "stream of consciousness", "Faustian", "rabbit hole" and "Travis Bickle", and the thought that a Bollywood movie could involve any/all of the above excites you, definitely check out No Smoking. Even if you only have the time to get yourself a Wikipedia education, given that it is a virtual certainty that the movie will vanish before the week is out.

No Smoking can be accused (and possibly fairly) of being much too self-indulgent and supercilious, and of being obscure simply for the sake of being obscure. If you're sure you prefer down-to-earth, conventional filmmaking you should definitely avoid it, but if you aren't averse to experimentation and cerebral exploration, try it out.

There's no guarantee that No Smoking itself will be your cup of tea - quite likely the contrary. But at least your ticket will send the Industry a signal that there is a market for courageous movies, actors and filmmakers who are willing to stick their collective necks out and make something different without resorting to the standard issue industry checklist.
Share. Save. Connect.
Tweet
NO SMOKING SNAPSHOT

See No Smoking full details
NO SMOKING USER REVIEWS
1 - 9 OF 9 COMMENTS
POSITIVE  |  NEGATIVE  |  NEWEST  |  OLDEST  |  MOST HELPFUL  |  LEAST HELPFUL
USER RATING
6.6
28 USERS
Performances
Script
Music/Soundtrack
Visuals
9.0
10.0
10.0
10.0
Can watch again - Yes
Good for kids - No
Good for dates - Unsure
Wait for OTT - Yes
AamchiHyd on 3rd Sep 2009, 11:57pm | Permalink
Nods and winks to other movies/books are the prerogative of any film-maker, but they shouldn't be in-your-face. Very bold attempt at showing Indian cinema a surrealistic part of fiction. Can be compared to other great Kafka adaptations like Orson Welles' 'The Trial', though this is perhaps more accessible than that, and not in a negative way either.

RATING
2
Anurag Shutup on 2nd Nov 2007, 2:09am | Permalink
This has to be the biggest blunder in terms of rating that Fullhyd has committed. Thankfully though people will not even click on the review after a week or so, and you guys can get away with murder. Three stars? For this self-indulgent rubbish? Lol! PS: Pass me some of the stuff that Ravi was smoking when he watched this...
RATING
2
Ajay on 31st Oct 2007, 5:47pm | Permalink
The rating is for the review. Told me what to expect and what to look for, and told it well.
Sitting here, in the abroad, I will have to resort to the net to watch this one...
RATING
8
Shashank on 29th Oct 2007, 7:48pm | Permalink
watch this movie....rather than the dumbshit chopras and johars make time and again
RATING
10
Priyanka Rao on 28th Oct 2007, 6:08pm | Permalink
Now, this movie is seriously a piece of crap and Ravi Mundoli looks like one of those half NRIs who thinks that good visuals and ridulous plots make a very good film of hollywood standards. Boss, I know that you like those technical details, but the same Speilberg who directed Jurassic Park directed Catch Me If You can and believe me, he used the technicalities only whereever necessary. Now, u have proved yourself to be one of those hippocratic movie reviewers.
RATING
2
Sesha on 28th Oct 2007, 8:24am | Permalink
Great Review
RATING
8
Deepa on 27th Oct 2007, 6:08pm | Permalink
Nice review - good reading and a good couple of laughs in the first paragraph. This story is reminiscent of a Stephen King yarn called Quitters Inc, which was weird.
Heheh, the prompt says I have to rate the movie "Even if it sucks." Reminds me why I used to work here
RATING
6
LEAVE A COMMENT
fullhyd.com has 700,000+ monthly visits. Tell Hyderabad what you feel about No Smoking!
MORE MOVIES
Latest Reviews
Macherla Niyojakavargam
Laal Singh Chaddha
Raksha Bandhan
Sita Ramam
DC League Of Super-Pets
more
Bimbisara
Bullet Train
Ramarao On Duty
The Legend
Shamshera
Thank You (Telugu)
Gargi
My Dear Bootham
Shabaash Mithu
HIT: The First Case
Contemporary Reviews
Vijayadasami
Shivaji - The Boss
Adavi Ramudu
Johnny Gaddaar
Next
more
Heyy Babyy
Spiderman 3
Chanti
Baadal
Bangaru Kamini
Maami
Dubai Seenu
Enter The New Dragon
Dhokha
Random Reviews
Bhadradri
S W A T (Hindi)
Chori Chori
Juniors
Redline
more
Toy Story 3 (3D)
Sanchalanam
Cocktail (Hindi)
D-Day
Manam
Vikramasimha - The Legend
Maggie
Kahaani 2
Baaghi 2
Charlie's Angels (Hindi)
SEARCH MOVIES
Dissatisfied with the results? Report a problem or error, or add a listing.
ADVERTISEMENT
SHOUTBOX!
{{todo.name}}
{{todo.date}}
[
ip{{todo.ip}}
]
{{ todo.summary }}... expand »
{{ todo.text }} « collapse
First  |  Prev  |   1   2  3  {{current_page-1}}  {{current_page}}  {{current_page+1}}  {{last_page-2}}  {{last_page-1}}  {{last_page}}   |  Next  |  Last
{{todos[0].name}}

ADVERTISEMENT
This page was tagged for
no smoking 4 movie in hindi movies
no smoking full movie
No Smoking hindi movie
No Smoking reviews
release date
Follow @fullhyderabad
Follow fullhyd.com on
About Hyderabad
The Hyderabad Community
Improve fullhyd.com
More
Our Other Local Guides
Our other sites
© Copyright 1999-2009 LRR Technologies (Hyderabad), Pvt Ltd. All rights reserved. fullhyd, fullhyderabad, Welcome To The Neighbourhood are trademarks of LRR Technologies (Hyderabad) Pvt Ltd. The textual, graphic, audio and audiovisual material in this site is protected by copyright law. You may not copy, distribute, or use this material except as necessary for your personal, non-commercial use. Any trademarks are the properties of their respective owners. More on Hyderabad, India. Jobs in Hyderabad.