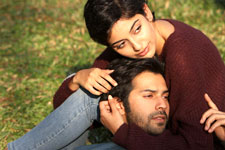 Prerna Prakash / fullhyd.com
EDITOR RATING
5.5
Performances
Script
Music/Soundtrack
Visuals
5.0
4.5
5.0
7.0
Suggestions
Can watch again
No
Good for kids
No
Good for dates
NA
Wait for OTT
Yes
There have been many movies that commented on the fickle thing we call love, and many movies that talk about loss. While India does not make a plethora of romance-dramas (we eschew that opportunity for item-numbers and physics-defying acts), we have enough to do us credit. Shoojit Sircar's October brings together the excitement of love, the melancholia of drama, and the desperation of a medical film, making it very different from what you have seen before.

The story follows a young, naive and slightly rebellious hotel management trainee, Dan Walia (Varun Dhawan), who finds out about an accident that has left his colleague Shiuli Iyer (Banita Sandhu) comatose and on the verge of death. When he finds out that her last words were about him, he sort of gets obsessed with her, and starts to look for every chance he can to go and help her. However, while Shiuli starts getting better with his constant support, Dan's world crumbles around his feet as he loses his job, his friends and the life he once led.

While the film starts off with a rather straight-forward tale of an arrogant man and a shy girl, the ending is nothing if not full of surprises. October also takes very unorthodox turns along the way, discontinuing the Bollywood traditions of love at first sight, true love and happy endings. However, that's not all good news. There are a lot of moments in the film when it's all gloomy and it feels like nothing can go right. Shoojit Sircar's previous movies like Piku and Vicky Donor also dealt with themes important to the current society like October does, but those films were rife with situational humour and brilliant scripts. That's not the case with October.

The movie takes a stand on passive euthanasia, an issue that has been a hot topic for many years in the medical field. October explores the morality behind taking away agency from the patient (in this case Shiuli) and criticizes the highly commercial medical system of the country. While the movie very clearly advocates anti-euthanasia, there are no powerful dialogues that espouse that stand (Shiuli cannot talk after the accident, and has no voice in the film), thus limiting the impact that the film could have had.

Also, this is a love story, but Dan and Shiuli have never had a conversation and never interacted, and thus fall into the ranks of countless other Bollywood couples who are "in love" but have no depth or gravitas to their relationship. Then, through the course of the movie you are introduced to many other characters including Shiuli's family, Dan's friends, and a very short cameo in the whole tableau of things by Dan's mother, but many of them are simply unnecessary.

While October was very obviously designed to be a tear-jerker, Varun Dhawan's bland performance stops the movie from becoming India's version of The Notebook. However, in comparison to his performances in his recent hits à la Judwaa 2, this is a more muted and adult role. Banita Sandhu, though a newcomer, surprises with a memorable performance. She does not have much acting to do throughout the first half - the scenes that come before her accident are nothing noteworthy - but the emoting in the second half does her credit. She has no dialogues, but portrays the desperation and pain of a comatose patient, of a lovelorn friend, and a daughter, with aplomb. The minute facial expressions that she uses to express herself are well done.

However, it is Gitanjali Rao, playing Shiuli's mother Vidya Iyer, who is far better than the main characters in the film. Vidya Iyer is an IIT professor and a worried mother, and exudes the perfect amount of composure, dignity and desperation of someone in her position. She blows the audience away with her elegance and poise.

Most of the film is shot inside a hospital, but there are bursts of freshness that come forth when the sublime beauty of Mother Nature is exhibited through awe-inspiring cinematography. The music throughout the film compliments the melancholic plot, making it a beautiful tribute to love.

This is not a film that will leave you hanging at the edge of your seat. There are no major plot-twists and no significantly impactful script. The acting is passable and the vibe throughout the film overbearingly sad. Even though there are a few attempts to lighten the mood through Varun Dhawan's glib jokes, the atmosphere remains one of doleful hope. The cinematography, camerawork and music are commendable, and the screenplay and direction are remarkable, but none of them can really take your attention away from all that is lacking in the movie. Unless you're feeling rather masochistic, it's safe to skip this one.
Share. Save. Connect.
Tweet
OCTOBER SNAPSHOT 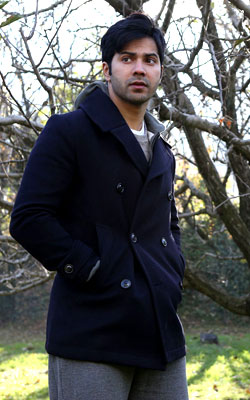 ADVERTISEMENT
This page was tagged for
peter rabbit in hindi move danworld
October hindi movie
October reviews
release date
Varun Dhawan, Banita Sandhu
Follow @fullhyderabad
Follow fullhyd.com on
About Hyderabad
The Hyderabad Community
Improve fullhyd.com
More
Our Other Local Guides
Our other sites
© Copyright 1999-2009 LRR Technologies (Hyderabad), Pvt Ltd. All rights reserved. fullhyd, fullhyderabad, Welcome To The Neighbourhood are trademarks of LRR Technologies (Hyderabad) Pvt Ltd. The textual, graphic, audio and audiovisual material in this site is protected by copyright law. You may not copy, distribute, or use this material except as necessary for your personal, non-commercial use. Any trademarks are the properties of their respective owners. More on Hyderabad, India. Jobs in Hyderabad.