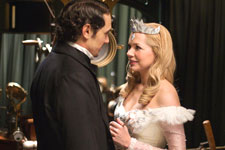 Kritika Deval / fullhyd.com
EDITOR RATING
4.0
Performances
Script
Music/Soundtrack
Visuals
4.0
4.0
4.0
7.0
Suggestions
Can watch again
No
Good for kids
Yes
Good for dates
No
Wait to rent it
No
The screen opens to a 4:3 Academy ratio black-and-white film that shows how Oz (James Franco) ends up in Oz. Sure, he seems like a bit of a loser, but hey, anyone who's seen or read the classic already knows that, and the whole storm thing in black-and-white, as the screen expands to a contemporary ratio, looks pretty cool. So far so good.

And then, we get to Oz - the place, with its brilliant colors, stunning visuals, and flowers, and fairie mosquitoes, and it's all still pretty cool. Oz - the "Great and Powerful" - is still loser extraordinaire. But, it all looks sooooo pretty!

Then enters Theodora the hot-as-hell-but-just-as-dumb witch (Mila Kunis), and the two start talking. And you realise that you're not in the wonderful Land of Oz. You're in a cheap, beautiful, and dumbed-down rip-off of it. Also, Oz, the person, is a lot of a loser.

You see, the brilliant men behind this movie decided to tell us the story of how Oz the "wizard" ended up in the Land of Oz. They also seemed to feel that the whole thing should be more or less like the journey that Dorothy undertook in the story of the Wonderful Wizard Of Oz.

And so, all of it is recreated - the hurricane in Kansas, the tagalong creatures, the travails along the yellow brick road, Glinda the Good Witch etc. etc. etc. Even this lack of ingenuity is OK.

But then, there are the characters. Man! They be dumb!

This is how the first half goes, give a little and take a little.

Oz: Hi! I'm Oz.
Theodora: Oh! You're The Wizard come here to fulfill the prophecy!
Oz: Ummm...
Theodora: Did you know about the pots and pots of gold stashed away in your kingdom...
Oz: ...of course, I'm the wizard. Wait how much gold are we talking about?
Theodora: ..., like, a lot of it? And, while we're on the subject, Imma be your queen, right?

And then they go off to Emerald City to meet Theodora's sister Evanora (Rachel Weisz), who's been "taking care" of the kingdom since the king had apparently been killed by his own daughter, Glinda "the Wicked Witch" (Michelle Williams)! (We realise that's a lot of quotation marks, but we have to assume they're being sarcastic too, for our own sanity.)

So... where were we? Yeah, Evanora the Obviously Not Good Witch of the East sends Oz off on Mission Destroy Glinda, and off goes Oz. Then he meets Glinda, who tells him that she's the Good Witch and Evanora's the Bad One. "What?!? No! How can that be possible? Why should I believe you?" - is what we would expect any sane person would say. Oz, it seems, is not that person.

Another thing wrong with this movie is how sexist it is. All things considered, The Wonderful Wizard of Oz is one of the most girl-power packed fairy tales ever. The strongest and the most cunning characters in the story are all women.

Here, they're all mostly shrill caricatures of heroic, and heroically evil, characters, whose sole aim is to glorify a character who James Franco manages to make even more moronic than he actually is.

Again and again Glinda says, "you're not the wizard we expected, but you're all we have". Well, guess what? The Glinda from the fairy tale can take down those two bimbos while sleepwalking.

James Franco's super-chirpy "I might be a carnival magician but I still have a heart" act gets real old real quick, like within ten minutes of introduction. Mila Kunis, Rachel Weisz and Michelle Williams are all beautiful and talented women who seem to have forgotten their latter characteristic.

The only two characters who actually enchant you are a bossy little porcelain girl and an adorable flying monkey, who are Oz's sidekicks.

And, yet, there are the aforementioned visuals. What you see on screen is every bit as vibrant and dynamic and fanciful as you would've imagined it all to be, if this were a book and you were reading it. The use of 3D is surpisingly effective, considering how often even well-directed movies seem to screw up on that front. Nowhere are you going to be left trying to squint your way through a dingy scene, or trying to figure out which character is supposed to be in the front.

Bottomline: Nobody over the age of 5 will enjoy this plodding tale of how a conman conned a bunch of really dumb people into letting him rule them. For those over 5, the only reason to watch this one would be to mourn lost potential, and the visual treat that enshrouds it.

Meanwhile, see if you can get your hands on a copy of Wicked: The Life And Times Of The Wicked Witch Of The West to find out just how awesome the witches of Oz really are.
Share. Save. Connect.
Tweet
OZ THE GREAT AND... SNAPSHOT
OZ THE GREAT AND POWERFUL (3D) SNAPSHOT 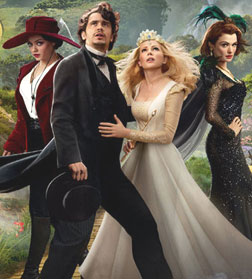 ADVERTISEMENT
This page was tagged for
Oz The Great And Powerful (3D) english movie
Oz The Great And Powerful (3D) reviews
release date
James Franco, Mila Kunis
theatres list
Follow @fullhyderabad
Follow fullhyd.com on
About Hyderabad
The Hyderabad Community
Improve fullhyd.com
More
Our Other Local Guides
Our other sites
© Copyright 1999-2009 LRR Technologies (Hyderabad), Pvt Ltd. All rights reserved. fullhyd, fullhyderabad, Welcome To The Neighbourhood are trademarks of LRR Technologies (Hyderabad) Pvt Ltd. The textual, graphic, audio and audiovisual material in this site is protected by copyright law. You may not copy, distribute, or use this material except as necessary for your personal, non-commercial use. Any trademarks are the properties of their respective owners. More on Hyderabad, India. Jobs in Hyderabad.