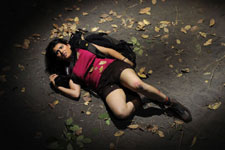 Ravi Kandala / fullhyd.com
EDITOR RATING
2.0
Performances
Script
Music/Soundtrack
Visuals
2.0
1.0
2.0
1.0
Suggestions
Can watch again
No
Good for kids
No
Good for dates
No
Wait to rent it
No
There have to be awards for reviewers, too. Not like the Filmfares or the Oscars, but more in the Paramvir Chakra and Mahavir Chakra genres. After all, if soldiers stand guard on the borders irrespective of the season to keep your family safe, reviewers venture out on each Friday night to watch movies like Panchami and Anandam Malli Modalaindi to ensure that you keep your family safe and far from such movies.

Which brings us to an interesting topic - the topic of choice. Imagine you are asked to choose between reviewing two films - one of a has-been actor attempting to make a comeback by directing the supposed sequel of the only hit he's been in, and the second of a has-been actress who's starring in a heroine-oriented movie where she's the only actor. How do you choose between these two gems? Well, by tossing a coin.

So Panchami it was, and what a ride! One that resulted in us walking out of the theatre and wondering whether we were in the middle of Hyderabad or in the jungle that Panchami was in. Plotwise, Panchami is the story of Panchami (Archana), an award-winning student and photographer. Panchami sets out to a forest one day to click pictures of wildlife for an upcoming photo exhibition.

She enters the forest, clicks a few pictures, befriends a dog, falls into a quagmire and is saved by the dog, jumps into a pool and imagines a song, gets chased by a lion, loses her backpack and camera, stays back in the night in the forest so she can retrieve her camera and backpack, does so in the morning, gets chased by a bunch of honeybees and falls into a cave - all this in the first half.

She then discovers a hidden temple supposedly constructed by Ashwatthama (from the Mahabharata), and palm leaves with inscriptions that say that anyone who performs pooja at a certain temple with a certain bunch of flowers will live forever. She then decides to go discover the temple, and is chased by Lord Shiva's trishool and other dangerous forces! And then it all ends in a hurry.

If you've made any sense of that plot, you will realise that Panchami is a supremely foolish girl who probably deserved every bit of the misery heaped upon her through the movie. After being chased around in the forest by all kinds of dangers possible for one day and night, if someone decides to stay back the next night in search of a mythical temple, they deserve to die a painful death. The film meanders around with shots of Archana interspersed with shots of animals and birds from National Geographic or Discovery, and will certainly bore you to death in the running time of 100 minutes.

Archana is the only actress around, and she does not even act as well as she did in some of her supporting roles. That she has strong legs is clear from the fact that the director focuses on them more than on her face. The technical values are non-existent, and the less said about the graphics the better. We are sure students from Arena Multimedia in Ameerpet make better graphics.

All in all, there are movies that you watch and there are movies that you are subjected to. Panchami belongs to the second variety - stay far, far away. And the only reason we are giving it a 2 is due to some determined Assistant Director who did a brilliant job of the continuity - the injuries that Archana sustains are maintained perfectly through the movie, and earns it one extra rating point.
Share. Save. Connect.
Tweet
PANCHAMI SNAPSHOT 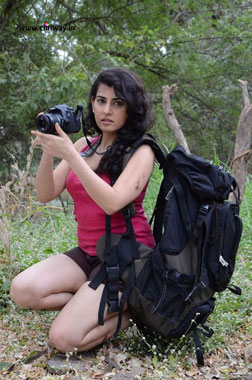 ADVERTISEMENT
This page was tagged for
panchamimovie kon actores
Panchami movie review
panchami movie review
panchami telugu movie
panchami telugumovie
Follow @fullhyderabad
Follow fullhyd.com on
About Hyderabad
The Hyderabad Community
Improve fullhyd.com
More
Our Other Local Guides
Our other sites
© Copyright 1999-2009 LRR Technologies (Hyderabad), Pvt Ltd. All rights reserved. fullhyd, fullhyderabad, Welcome To The Neighbourhood are trademarks of LRR Technologies (Hyderabad) Pvt Ltd. The textual, graphic, audio and audiovisual material in this site is protected by copyright law. You may not copy, distribute, or use this material except as necessary for your personal, non-commercial use. Any trademarks are the properties of their respective owners. More on Hyderabad, India. Jobs in Hyderabad.