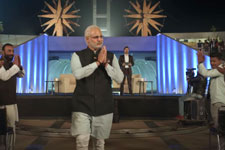 T J Reddy / fullhyd.com
EDITOR RATING
2.0
Performances
Script
Music/Soundtrack
Visuals
3.0
1.0
3.0
4.0
Suggestions
Can watch again
No
Good for kids
No
Good for dates
No
Wait to rent it
Yes
PM Narendra Modi, the movie, chronicles the journey of Narendra Modi (Vivek Oberoi), the man, as he begins his life as the son of an unassuming tea vendor and ends up becoming the Prime Minister of the world's largest democracy. Why does a movie that talks about the journey have a title that references the destination, you ask? Well, that should be the least of your concerns.

When the film stumbled at its first hurdle, we looked closer to find out how it managed to pick itself back up. There is an abundance of politically charged cinema that director Omung Kumar could have channelled to make his endeavour a successful one, but we soon came to the realise that expecting nuance from a filmmaker who revelled in the abuse of a woman in his previous venture was a lost cause.

This movie lacks a subtle exploration of political ideologies a la Mani Ratnam's Iruvar. It rarely, if ever, spends time exploring the birth of a person's political ideology and worldview. The character of Narendra Modi this film presents seemingly came out of his mother's womb saluting the tricolour, and was bellowing political slogans before he shed his first tear asking to be fed. He is a man wiser than the sage he seeks guidance from. That is exactly how one conjures up a character more boring than the empty page his journey is being written on.

With the main character lacking any semblance of growth over the runtime, you might look around the film to find a politically astute antagonist - someone that resembles High Chancellor Adam Sutler or Peter Creedy from V For Vendetta. A strong opposing force for our larger than life protagonist to overcome on his way to establishing his vision of a just democracy. Well, we are sad to report that we kept looking but never saw anything more than a babbling bumbling band of buffoons who were dumbstruck by our hero's every action. You almost wonder how these numbskulls came to power in the first place.

With a wooden protagonist on one side and a paper-thin antagonist on the other, we looked at the length and breadth of the movie to see if its over two-hour runtime had any interesting sequences, compelling supporting characters or arresting filmmaking techniques on offer. We regret to inform you that this film lacks the impeccable presentation of the NTR duology that came out earlier this year, it lacks the kind of voyage Gulaal took when it dragged its audience through the mire that is the Indian political system, it lacks the need to tell the audience that a general election is won by a small village of people and not by one single man a la The War Room, it lacks the blend of unique supporting characters that Prasthanam presented to us, it lacks the sheer entertainment value of Oke Okkadu, and in a cruel twist of fate, it lacks the so-bad-its-good quality that Lakshmi's NTR had.

This is a film full of bad wigs, even worse costume design, dialogues as cringy as the Whatsapp forwards your out-of-touch uncle sends you, sets so lazily built that they have two portraits of Mahatma Gandhi in the same room, and a narrative that short-changes the achievements of the political party it claims to be aligned to. You wouldn't expect to bear witness to such an oxymoron in a film like this, but you'd be surprised.

What make these multiple filmmaking mishaps moderately bearable are the film's competent cinematography, bombastic yet fitting background score and supporting performances from a few capable actors. We warn against expecting the pulse-pounding and anxiety-inducing staging and cinematography of Uri, but we are pleased to report that the camera stays where it needs to and shows you what you need to see. The score, like the film it's in, may lack subtlety, but for an audience inundated with loud music accompanying their favourite stars on a weekly basis, this shouldn't come as much of a departure from the norm.

What is also in line with the norm is veteran actors Boman Irani, Zarina Wahab, Rajendra Gupta and a handful of other essaying their one-note roles to perfection. They humanise the main character and make him more likeable with every scene they share with him. We say this because Vivek Oberoi's caricaturish rendition of the Prime Minister of this country is in equal parts amusing and infuriating. On his day Oberoi is a fantastic actor, but in this case he may have chosen to play a character that shines a spotlight on his weaknesses.

For example, even though the real-life Narendra Modi divides opinion, it is universally agreed that he is an orator par excellence. Modi commands his rallies like The Rock commands a WWE crowd, and bringing that same level of energy to the big screen requires a level of connection with the audience that Oberoi cannot muster. And therein lies the problem with every single one of the endless politically skewed biopics we have been subject to over the past six months.

Not one of these films has captured the essence of the person they claim to have portrayed. Not the NTR films, not Yatra, not The Accidental Prime Minister, and not even the best of the bunch, Uri. Every single one of these movie either lacked a basic understanding of how the political game is played or chose not to show it to us in an effort to keep their renditions of their main characters wholly good. We find it hard to believe that supporters of these figures would find these one-dimensional portrayals entertaining simply because of how far away from reality and the common man they seem to be. Almost every single one of these figures made themselves popular by calling themselves "one of us", and in a comical turn these films made us disassociate ourselves from these characters rather than find common ground with them.

Hence, we suggest that you find a better avenue for both your political and your historical studies, and venture into the cinema hall hoping to be entertained. That mindset just might help you filter the noise and see the con job at hand.
Share. Save. Connect.
Tweet
PM NARENDRA MODI SNAPSHOT 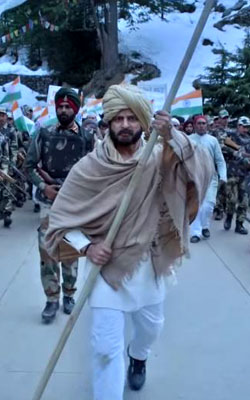 ADVERTISEMENT
This page was tagged for
Pm narendra modi full movie
indian movies pm narendra modi
pm narendra modi full movie
PM Narendra Modi hindi movie
PM Narendra Modi reviews
Follow @fullhyderabad
Follow fullhyd.com on
About Hyderabad
The Hyderabad Community
Improve fullhyd.com
More
Our Other Local Guides
Our other sites
© Copyright 1999-2009 LRR Technologies (Hyderabad), Pvt Ltd. All rights reserved. fullhyd, fullhyderabad, Welcome To The Neighbourhood are trademarks of LRR Technologies (Hyderabad) Pvt Ltd. The textual, graphic, audio and audiovisual material in this site is protected by copyright law. You may not copy, distribute, or use this material except as necessary for your personal, non-commercial use. Any trademarks are the properties of their respective owners. More on Hyderabad, India. Jobs in Hyderabad.