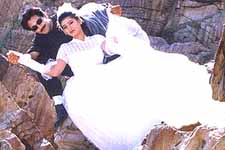 EDITOR RATING
5.0
Performances
Script
Music/Soundtrack
Visuals
NA
NA
NA
NA
Suggestions
Can watch again
NA
Good for kids
NA
Good for dates
NA
Wait for OTT
NA
Going by the market trends you'd expect a decent enough musical entertainer from the acclaimed producer R B Choudary. And from Tarun you'd look forward to a sizzling sentimental love story. What you get instead is a silly sentimental drama that seems to be made solely to capitalize on the popularity of Tarun.

The premise is interesting. A shy girl Sandhya (Sneha) falls in love with a happy-go-lucky guy Ganesh (Tarun), the son of a junkyard dealer, whose only pastime is marrying off teenage couples who fall in love, much to the chagrin of their parents. Unable to let her love known to Ganesh, she asks her sister, Sirisha (Preeti), to convey her intentions to Ganesh. But the jealous sister would rather have Ganesh for herself.

The film starts off on a good note with Ganesh finding a diary in one of the junk cupboards and starting to read it. And he is shocked by the blow-by-blow account of Sandhya's love story and her harboring intentions of marrying him. So far so good, you'd be tempted to say. Actually, not very. There is no spark in the narration, and the director uses very cut and dry methods that aren't in the least moving.

Ganesh also develops a soft corner for Sandhya, and spurns the love of Sirisha. And fearing that she too might end up with a similar fate, Sandhya keeps her love to herself. Meanwhile, her father is transferred to Vizag and the confiding in the diary comes to an end. But the hero decides to give a fillip to the love story and goes in search of Sandhya, to Vizag.

Except for the idea the diary from which the movie unfolds, there is nothing novel about the film. As the movie progresses the plot falls by the wayside and traditional Tollywood tricks are churned out to make you laugh or feel sorry for the heroine or the hero. It gets more and more silly as we enter the second half of the film, and by the climax it all seems so cliched and contrived that you want to walk out of the theater.

The age-old story of unknown persons, in this case Sivaji and Tarun, becoming the best of friends while the latter is on the voyage to discover his girlfriend and her getting engaged to the former is too stupid to even think of in this Internet age. But that is how the film is, though a couple of songs are good and shot well. Apart from that there is hardly anything in the movie that would make it a worthwhile visit to the theater.
Share. Save. Connect.
Tweet
PRIYAMAINA NEEKU SNAPSHOT

ADVERTISEMENT
This page was tagged for
Priyamaina Neeku telugu movie
Priyamaina Neeku reviews
release date
Tarun, Sneha
theatres list
Follow @fullhyderabad
Follow fullhyd.com on
About Hyderabad
The Hyderabad Community
Improve fullhyd.com
More
Our Other Local Guides
Our other sites
© Copyright 1999-2009 LRR Technologies (Hyderabad), Pvt Ltd. All rights reserved. fullhyd, fullhyderabad, Welcome To The Neighbourhood are trademarks of LRR Technologies (Hyderabad) Pvt Ltd. The textual, graphic, audio and audiovisual material in this site is protected by copyright law. You may not copy, distribute, or use this material except as necessary for your personal, non-commercial use. Any trademarks are the properties of their respective owners. More on Hyderabad, India. Jobs in Hyderabad.