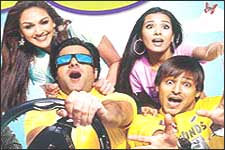 Kavita Krishnamoorthy / fullhyd.com
EDITOR RATING
5.0
Performances
Script
Music/Soundtrack
Visuals
NA
NA
NA
NA
Suggestions
Can watch again
NA
Good for kids
NA
Good for dates
NA
Wait to rent it
NA
Once upon a time, there were a blind man and a deaf man. And then there came another man, who thought he could weave their life stories into a colorable movie script.

Big mistake. For a start, the director has his audience confused with a bunch of 3-year-olds. And secondly, he also forgot to tell the actors that they have to work with each other, and not just flay about in the same frames together.

Harmless as it may be, Pyare Mohan simply fails to take off. It just sits there on the runway, waiting for the audience to lift it up. Unfortunately, all it succeeds in doing is making the viewer want to skedaddle his way to the nearest exit.

What's this one about? Well, Pyare (Fardeen Khan) is blind. And Mohan (Viveik Oberoi) is deaf. These defects are a result of a freak accident when they used to be stuntmen. And like all die-hard romantics, their dream is to meet and fall in love with sweet-voiced and dainty-faced girls.

Enter Preeti (Esha Deol) and Priya (Amrita Rao). These two sisters are on a mission to take over the music and dance world. Dressed in their tiny trendy tees and barely there shorts, they strut their stuff for Pyare to hear and Mohan to see, and the two males are riveted hook, line and sinker.

But our dynamic duo end up getting dumped even before their romances commence, and thankfully, we get a break here to cuss ourselves - aloud this time - for having frittered away valuable time and money.

The fair ladies are on their way to Bangkok on a one-month tour, and they are seated next to a priest on the plane. They cross paths with underworld don Tony (Boman Irani), who was presumed dead in a car explosion (shown in the first 3 minutes of the movie).

Now Mr. Tony has an uncanny addiction for making confessions about his “deeds”. As the plane sways and swerves dangerously, thousands of feet in the air, Tony, fearing death, decides to confess to the priest about faking his own death so that he could leave India and settle in Bangkok.

Now the plane doesn't crash, and Don Tony's secret is out. And now he has to knock off P P & P Inc. to ensure his cover isn't blown. He manages to kill the priest, the girls are blamed for it, and they manage to make the headlines in two countries. But Don Tony isn't happy. The girls still need to be snuffed for him to live in peace.

Enter Pyare and Mohan. They watch the news in India, manage to get overnight express visas to Bangkok, and are, in essence, here to save the day. They succeed in getting on Tony's hitlist, along with the girls, and what ensues is your regular cat-and-mouse chase, devoid of any creativity or ingenuity.

The comradeship of Viveik Oberoi and Fardeen Khan comes across as more of foolish prattle than whimsical banter. Fardeen – definitely carrying some post-marriage weight - looks sluggish and stiff. Add that to the role of a blind man, and it's not a very pretty picture. Vivek tries his level best to chirk up the energy, but there's only so much one can do with a languorous script.

Boman Irani's innate talents have been underplayed in the role of a lisping, barbaric mafioso, and having said so, he is probably the only one worth watching in this movie. The girls follow the script meticulously - alternating between shedding tears and cackling like geese where the scene demands it. You may want to completely obliterate them from time to time, and you end up praying that don Tony manages to get them before you do.

Add this to a couple of spiritless romance numbers and you're stuck in a stodgy dullsville. While some of the jokes might make you snigger from time to time, overall this one does nothing to tickle your funny bone.
Share. Save. Connect.
Tweet
PYARE MOHAN SNAPSHOT

ADVERTISEMENT
This page was tagged for
Pyare Mohan hindi movie
Pyare Mohan reviews
release date
Viveik Oberoi, Fardeen Khan
theatres list
Follow @fullhyderabad
Follow fullhyd.com on
About Hyderabad
The Hyderabad Community
Improve fullhyd.com
More
Our Other Local Guides
Our other sites
© Copyright 1999-2009 LRR Technologies (Hyderabad), Pvt Ltd. All rights reserved. fullhyd, fullhyderabad, Welcome To The Neighbourhood are trademarks of LRR Technologies (Hyderabad) Pvt Ltd. The textual, graphic, audio and audiovisual material in this site is protected by copyright law. You may not copy, distribute, or use this material except as necessary for your personal, non-commercial use. Any trademarks are the properties of their respective owners. More on Hyderabad, India. Jobs in Hyderabad.