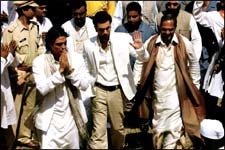 A still from Raajneeti
Raajneeti, a Hindi movie, is not currently screening in Hyderabad.
LATEST COMMENT
singhprashast2011 on 9th Sep 2015, 8:26pm | Permalink
Watching political drama films is not in my routine list. Thus my review may not appeal to each and everyone. It's true that Prakash Jha is a master at making Political films, but its also true that he faltered to handle such a sensitive subject.

Raajneeti is a predictable political revenge saga that has no soul in itself. The positive efforts of the film are overshadowed by damp writing, poor direction, and of course, a very 'political' type of routine screenplay.

The film starts off well. Till the interval, many things go well. However, a poorly scripted second half just doesn't impress.

Talking of the performances, every actor, except Katrina, gives an immensely powerful performance. Rather, performances are the only redeeming feature of this film. The music is charming, but was however, not just needed at all. The cinematography is excellent. The climax of the film is well scripted.

Talking about what's not good in the film, its obvious that a poor writing and characterization kills the film. Although you see Naseeruddin Shah in all posters prominently, you don't get to see him for more than 2 or 3 minutes. Ranbir Kapoor's character is the worst scripted. One is lost in translation, thinking whether his character is positive or negative. There are various moments where you realize that the film's canvas was very big and the subject could have been exploited better. But, the film falls short of all the expectations one makes from this film.

But, there are a few scenes, which really deserve praise. The sequences involving Ajay Devgn are simply the best ones. Apart from this, there is nothing you can expect from this film.

On the whole, Raajneeti is a film that never takes itself seriously in terms of doing justice to its subject, but does take itself too seriously in terms of being a "Raajneeti" as a bad film. If you like such political revenge sagas, watch it, otherwise, avoid it with no regrets. Heavily disappointing.


Pros: Climax and performance by all. Nothing else.
Cons: Poor story, execution, Ranbir Kapoor's poor characterization, excessive politics!
0
0
USER RATING
3.0
See all comments
RAAJNEETI REVIEW
Some might call Raajneeti a much brighter, friendlier version of the grittier, more morose Sarkar. Some might call it a watery version of the infinitely more splendid Mahabharata. The naïve, however, might simply be able to enjoy Raajneeti for its more apparent worth.

Though it possesses an instantly engaging cinematic splendour, Raajneeti is like any other political drama. And by any, we mean any. There is betrayal, plotting, scheming, cold blooded murder, pawns being shifted all over ruthlessly, and basically, unusually well-groomed political leaders who smoulder their way th....

ADVERTISEMENT
This page was tagged for
raajneeti 1 movie
Raajneeti hindi movie
Raajneeti reviews
release date
Ranbir Kapoor, Ajay Devgn
Follow @fullhyderabad
Follow fullhyd.com on
About Hyderabad
The Hyderabad Community
Improve fullhyd.com
More
Our Other Local Guides
Our other sites
© Copyright 1999-2009 LRR Technologies (Hyderabad), Pvt Ltd. All rights reserved. fullhyd, fullhyderabad, Welcome To The Neighbourhood are trademarks of LRR Technologies (Hyderabad) Pvt Ltd. The textual, graphic, audio and audiovisual material in this site is protected by copyright law. You may not copy, distribute, or use this material except as necessary for your personal, non-commercial use. Any trademarks are the properties of their respective owners. More on Hyderabad, India. Jobs in Hyderabad.