Sai Tulasi Neppali / fullhyd.com
EDITOR RATING
3.0
Performances
Script
Music/Soundtrack
Visuals
5.0
3.0
6.0
6.5
Suggestions
Can watch again
No
Good for kids
No
Good for dates
No
Wait for OTT
No
In the rarefied world of Tollywood superstars, Ravi Teja has built a niche for himself as the hero with a cracking flair for comedy. His voice has a sarcastic edge; his lanky body embodies mischief. Who can forget his iconic "jintata" hand gestures in Vikramarkudu or his hijinks in Khadgam? He was the scrappy, down-to-earth guy in a rising tide of metrosexual main men with washboard abs and gelled hair. It earned him the moniker Mass Maharaja. But when he veers away from these strengths and falls trap to the rituals of hero worship, movies like Ramarao On Duty are born - vapid, boring time-wasters.

Ravi Teja plays the titular role of Ramarao, an honest, sincere Deputy Collector on a mission to root out corruption and government inefficiency (stop me if you've heard this story before). His being too good at his job doesn't sit well with corrupt higher-ups, and he is quickly transferred to a quiet corner of Horsely Hills, tucked away where he won't cause too much trouble. But there, he stumbles on a series of mysterious disappearances and uncovers a Red Sandalwood smuggling ring. Ramarao may be a Deputy Collector, but he fights like a cop and investigates like a detective.

Right from the gratuitous introduction scene where Ramarao bursts into the frame chasing a couple of goons and sets them on fire, images of their enflamed bodies reflected on his aviator sunglasses, it is clear the kind of movie this is going to be. One where the story and screenplay are in service of the hero, rather than the other way around. Nearly 30 minutes are used to establish Ramarao as the paragon of virtue. He may be a government employee, but he can step into the ring to beat up a small army of thugs and emerge victorious without so much as a wrinkle in his shirt. He is ambidextrous - wielding a pen in each hand, he goes through mountains of paperwork at twice the rate of other humans. He is a good father, a good son, a good son-in-law and a good friend. He fights on behalf of the less fortunate. His ally and friend (played by Tanikella Bharani) calls him an "idiopathic insomniac", which he explains to be someone who is unable to sleep until justice is delivered. A panel of judges investigating Ramarao's career describes him as a "revolutionary officer". Ramarao is apparently the world's most wholesome man.

Three-quarters into the runtime, very little has actually happened. The story is set in the 1990s, and the movie's numerous fight scenes and songs feel just as anachronistic. There is a distinct sense that writer and director Sarath Mandava's script had a "commercial movie make-over" in an attempt to woo the Ravi Teja fanbase. Add an item song with a buxom babe here, drop in a knife fight there, and flank it with a couple of "foreign location" songs. Bada bing bada boom. One minute Ramarao and his lady love are romancing under the gray skies of Horsely Hills, and in the next, they are in sunny Spain, waltzing around tangerine trees. Will Ramarao save a busload of people from falling off a cliff? You bet.

Every time the story turns a corner and Ramarao is faced with an interesting challenge, the solutions simply arrive at his doorstep - no thrill of discovery. When he identifies the corrupt government official heading a smuggling operation, but is unable to nail him, a thick file with all the damning evidence he needs is presented to him. Another mystery involving missing people is resolved when an old man who witnessed their fates discloses the whole story to Ramarao.

The only bits of the premise with some meat on them were those involving the mechanics of the smuggling operation - how Sandalwood trees are cut, packed and exported abroad; and the codenames that the smugglers use. But this promising line of inquiry peters out as the script goes off on needless tangents.

With the story spinning on the axis of Ramarao, all other characters are mere blurs, their motivations skin-deep. Ramarao's arch rival is a cop called Murali (played by Venu Thottempudi) who harasses him for most of the story, and in a quick instant, becomes an ally. Ramarao's first love Malini (Rajisha Vijayan) betrays him and marries someone else simply because her "father would be really sad" otherwise. Several scenes are used to establish that Ramarao's family - father-in-law (Nasser), and wife (Divyansha Kaushik) - opposes his investigations into the missing person case, but in a sudden change of heart, supports him and even lauds him on his mission.

Watching two comedy greats Ravi Teja and Venu Thottempudi mouthing joyless dialogues makes you feel like you paid for a standup show but got a TED talk instead. Despite playing rivals and sharing several scenes, Ravi Teja and Venu's chemistry falls flat. Ravi Teja, who is so much of a motor mouth in Telugu, awkwardly stumbles over English phrases, like a schoolkid reading aloud from a textbook during class. While the people around him talk in a Srikakulam accent, an exception is made for Ravi Teja who slips in and out of it as he pleases.

Rajisha Vijayan plays the role of a woman in search of her missing husband with a sincere and convincing depth. Divyansha Kaushik, who plays Ramarao's wife, throws a lot of forlorn glances at her husband and doesn't do much talking, but when she does, there is a childish quality in her eager voice. Rahul Ramakrishna has a small but significant role in the movie, which he executes masterfully. Several other veteran actors such as Naresh and Nasser have blink-and-you-miss-it roles.

If the half-empty theatres and audience walk-outs, and the tittering, sighing and eye-rolling from the viewers hold any clues, then movies like Ramarao On Duty, that sacrifice a good story for a sprinkling of so-called fan moments of unnecessary song and fight, are surely on their way out. One can only hope. 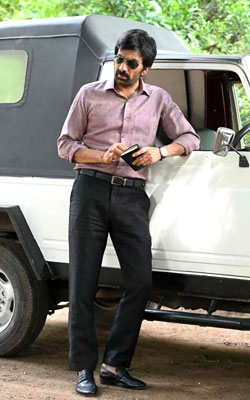 ADVERTISEMENT
This page was tagged for
Ramarao On Duty telugu movie
Ramarao On Duty reviews
release date
Ravi Teja, Divyansha Kaushik
theatres list
Follow @fullhyderabad
Follow fullhyd.com on
About Hyderabad
The Hyderabad Community
Improve fullhyd.com
More
Our Other Local Guides
Our other sites
© Copyright 1999-2009 LRR Technologies (Hyderabad), Pvt Ltd. All rights reserved. fullhyd, fullhyderabad, Welcome To The Neighbourhood are trademarks of LRR Technologies (Hyderabad) Pvt Ltd. The textual, graphic, audio and audiovisual material in this site is protected by copyright law. You may not copy, distribute, or use this material except as necessary for your personal, non-commercial use. Any trademarks are the properties of their respective owners. More on Hyderabad, India. Jobs in Hyderabad.