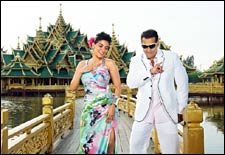 A still from Ready (Hindi)
Ready (Hindi), a Hindi movie, is not currently screening in Hyderabad.
READY (HINDI) REVIEW
In a recent interview, Salman Khan declared that he wants Ready to beat the record set by 3 Idiots, in terms of collection. That may not seem such a tall order, given the fan-base the man has, but is the movie any good?

For those who have seen the original Telugu film, Ready, the Hindi version may look like an over-the-top copy. Fact remains that the latter is at least 15 minutes shorter, and it does have the top cat of Bollywood, Salman Khan.

ADVERTISEMENT
This page was tagged for
Ready (Hindi) hindi movie
Ready (Hindi) reviews
release date
Salman Khan, Asin
theatres list
Follow @fullhyderabad
Follow fullhyd.com on
About Hyderabad
The Hyderabad Community
Improve fullhyd.com
More
Our Other Local Guides
Our other sites
© Copyright 1999-2009 LRR Technologies (Hyderabad), Pvt Ltd. All rights reserved. fullhyd, fullhyderabad, Welcome To The Neighbourhood are trademarks of LRR Technologies (Hyderabad) Pvt Ltd. The textual, graphic, audio and audiovisual material in this site is protected by copyright law. You may not copy, distribute, or use this material except as necessary for your personal, non-commercial use. Any trademarks are the properties of their respective owners. More on Hyderabad, India. Jobs in Hyderabad.