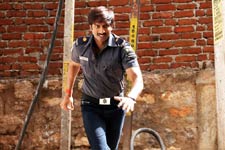 Ravi Kandala / fullhyd.com
EDITOR RATING
5.0
Performances
Script
Music/Soundtrack
Visuals
5.0
7.0
5.0
6.0
Suggestions
Can watch again
No
Good for kids
No
Good for dates
No
Wait for OTT
Yes
You know that feeling when you go to a place expecting a lot and then you do get a lot, but somewhere deep down, there is a slight tinge of disappointment? We don't think anyone's given this feeling a name yet, but if you want to experience what we're talking about, watching Sahasam after a marathon viewing of Chandrasekhar Yeleti's earlier films (including Aithe and Anukokunda Oka Roju), will help you.

Sahasam has it all, so to speak. A hero without a pot belly and a fake wig, a story (yes! a story!), great cinematography, great locales, outstanding conceptualization of the clues of a treasure hunt, and powerful, yet vulnerable villains - Sahasam has it all. But the facts that the movie is template-based (how different can a treasure hunt be?), and that the chase does not proceed at a breakneck pace, dampen the viewing experience.

He keeps buying lottery tickets to get rich, but the only time he wins, it is for Rs. 100. He finds out one day that his grandfather (Suman) was a diamond merchant who hid a fortune somewhere in Pakistan during Partition.

Fate brings him face-to-face with Sri Nidhi (Taapsee), an overtly devotional girl, who is on her way to visit the Hinglaj Devi temple in Pakistan. He cons her and manages to accompany her to Pakistan. There, he finds that there is a group of outlaws, headed by Sultan (Shakti Kapoor), who are also after the same treasure.

There is only so much you can do with a movie with as standard a template as a treasure hunt. Two groups - one led by the hero and the other by the villain - will be chasing a treasure, there will be cryptic clues, there will be dangers, and ultimately, there will be rewards. The only payoffs you can give audiences in such a scenario are the thrills that they can find in the unraveling of the clues and getting to the treasure.

To his credit, Chandrasekhar Yeleti does a commendable job with this part of the movie. He writes in some good clues, and puts up a good maze with some daunting obstacles to solve the clues and reach the treasure.

However, the emotion in the film does not catch on well, and the "WOW" moments are not as plenty as you would like. Yeleti also seems handicapped by budget constraints, and some of the scenes seem incomplete, as if they were left un-rendered.

The wry sense of humour that Yeleti has displayed right from Aithe remains intact, and there is some situational comedy in the first few sequences. Gopichand does well in a role that does not really challenge him in any manner. Taapsee Pannu continues with her "deer caught in headlights" act, and with her unnatural dubbing.

Shakti Kapoor's role is limited due to the fact that he does not know the language at all. But his make-up is absolutely spot on.

Production values are good upto an extent - but how one wishes that the producer had loosened his purse strings a bit more. Music by Sri is functional, and the background music is loud.

It is indeed sad that film-makers like Meher Ramesh manage to keep wresting huge budgets from producers, but genuinely good storytellers like Yeleti get the short end of the stick. Sahasam is a movie that really leaves you wishing that it delivered more.
Share. Save. Connect.
Tweet
SAHASAM SNAPSHOT 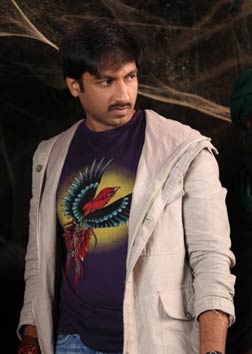 See Sahasam full details
SAHASAM USER REVIEWS
1 - 3 OF 3 COMMENTS
POSITIVE  |  NEGATIVE  |  NEWEST  |  OLDEST  |  MOST HELPFUL  |  LEAST HELPFUL
USER RATING
8.6
5 USERS
Performances
Script
Music/Soundtrack
Visuals
NA
NA
NA
NA
Can watch again - NA
Good for kids - NA
Good for dates - NA
Wait for OTT - NA
Hari on 13th Jul 2013, 9:44am | Permalink
Spot on with the review. Just watched this movie for Yeleti. Very few try to break the standard formulae in TFI and we should be thankful to those few. Yeleti is firmly in that mould. Pity there is no market for such story tellers here. Also this genre was milked by hollywood to such an extent, there aren't any surprises left in terms of screenplay. Still I would prefer this than the Rachas, Nayaks, Badshas. I wholeheartedly agree with your last two sentences.
RATING
6
Arya on 15th Jul 2013, 12:58pm | Permalink
Its really super movie, with good action sequences, treasure hunts, daring scens, i think this is one of best Tollywood movie with out any hipes, with out over shows..
RATING
10
divya on 15th Jul 2013, 11:40am | Permalink
"sahasam" a good attempt but could have done even better

ADVERTISEMENT
This page was tagged for
Sahasam telugu movie
Sahasam reviews
release date
Gopichand, Taapsee
theatres list
Follow @fullhyderabad
Follow fullhyd.com on
About Hyderabad
The Hyderabad Community
Improve fullhyd.com
More
Our Other Local Guides
Our other sites
© Copyright 1999-2009 LRR Technologies (Hyderabad), Pvt Ltd. All rights reserved. fullhyd, fullhyderabad, Welcome To The Neighbourhood are trademarks of LRR Technologies (Hyderabad) Pvt Ltd. The textual, graphic, audio and audiovisual material in this site is protected by copyright law. You may not copy, distribute, or use this material except as necessary for your personal, non-commercial use. Any trademarks are the properties of their respective owners. More on Hyderabad, India. Jobs in Hyderabad.