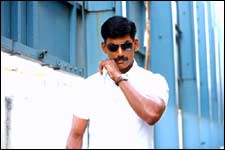 There's a thin line between a speech and an attempt to murder. Actually, it's not so thin, but I'm so far ahead of it, it looks pretty thin from here anyway. But it's not all my fault - the warning signs were all there for you. The promos all proudly said this one was from the makers of Pogaru, Bharani and Bhayya, didn't they? If you went to watch this one after that, then you remind me of the story of the wolf and the giraffe. We don't have space for the entire story here, but the moral of the story is that you are dumb.

Anyway, let's get to the tale. I am a young IPS officer working courageously and single-mindedly towards a single purpose, something most people say is impossible for me but something I am determined to pursue until my last breath - copying Venkatesh's acting from Gharshana. I come reasonably close - I wear similar sunglasses. However, we do not want this movie to look completely like a copy of Gharshana, so we copy from other movies, too - like an initial bit with children from Anjali.

Our city is infested by a bunch of crooked politicians, and suddenly they all begin to die. Now only a policeman will want to interfere with something like that, and I investigate to discover that Pratap Rudra (Upendra), an ex-cop that I used to hold in high regard, is killing them. Pratap has his reasons, which he fortunately does not get into, since he already overshadows me in just 10 minutes of screentime in the entire film, and with another 10 minutes, he'd have looked like the hero of the movie.

I challenge Pratap that I will bring the criminals to justice without killing them like he does, and he laughs it off without realizing that I have a secret weapon - the climax of this movie, that will make any criminal agree to get into jail if it will just stop. This movie runs for 3 hours and 10 minutes, and at the very least it shows that I am a better actor, since I act for longer times now.

Liked Nayantara showing all that skin in the promos? Well, here's a secret - most scenes were shot using body doubles, since she doesn't like such clothes at all these days. The ones where she is fully clad, that is. You'd have seen me strip a lot in the promos, too. If you loved it, please email me, including your name and gender.

If you're a connoisseur of good movies, it's hard not to like Salute. And if you allow us to quote you on that, we'll give you a free hoarding. It's my movie, remember? We have an ad budget that has more zeroes than the period between 2 light years. And if you found something wrong with that analogy, you're going to love this movie even more - we have plenty to keep you busy.

Finally, remember to take your watch along, and keep adding 10 minutes to the time every 10 minutes. If you don't play with your head, we will.
Share. Save. Connect.
Tweet
SALUTE SNAPSHOT


Pros: Upendra
Cons: Except upendra everything

ADVERTISEMENT
This page was tagged for
Salute telugu movie
Salute reviews
release date
Vishal, Nayantara
theatres list
Follow @fullhyderabad
Follow fullhyd.com on
About Hyderabad
The Hyderabad Community
Improve fullhyd.com
More
Our Other Local Guides
Our other sites
© Copyright 1999-2009 LRR Technologies (Hyderabad), Pvt Ltd. All rights reserved. fullhyd, fullhyderabad, Welcome To The Neighbourhood are trademarks of LRR Technologies (Hyderabad) Pvt Ltd. The textual, graphic, audio and audiovisual material in this site is protected by copyright law. You may not copy, distribute, or use this material except as necessary for your personal, non-commercial use. Any trademarks are the properties of their respective owners. More on Hyderabad, India. Jobs in Hyderabad.