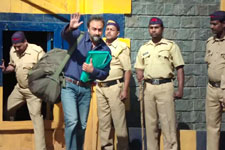 T J Reddy / fullhyd.com
EDITOR RATING
5.0
Performances
Script
Music/Soundtrack
Visuals
7.0
4.0
5.0
6.0
Suggestions
Can watch again
Yes
Good for kids
No
Good for dates
Yes
Wait for OTT
No
One piece of matchmaking advice to live and die by is - always undersell. Even if you are trying to set George Clooney, Scarlett Johansson or your best friend up with potential dates, undersell them. The logic behind doing this is that it lowers the expectation of any potential suitor. With low expectations, dinner and a movie make for a great first date.

With Sanju, co-writer/editor/director Rajkumar Hirani follows the same rules when he presents the character of Sanjay Dutt (Ranbir Kapoor) to his audience during the initial exchanges. He makes sure that we are well aware of Dutt's many flaws as a human being. Dutt has been sentenced to 6 years in prison. Dutt is a man who has ingested and inhaled pretty much every narcotic known to humanity. Dutt is a womanizer that has shared a bed, a couch, the back seat of a car and many other exquisite locales with over 350 women. And finally, Dutt is a man looking to find someone to tell his version of his story to before his stint in the Yerwada jail.

Enter Winnie Diaz (Anushka Sharma), a world-renowned biographer who listens to anecdotes about Dutt's life from Dutt himself, from his wife Maanyata (Dia Mirza) and from his best friend Kamlesh Kapasi (Vicky Kaushal). On the promotion circuit, Rajkumar Hirani spoke about how the fictional character of Winnie Diaz mirrored his writing partner Abhijat Joshi and him during the times that they listened to Dutt's many anecdotes. But like the character, the writers seem to have grown a fondness for the man over the course of learning about him that far overcomes their objective duties as storytellers. And facing the brunt of the fierce friendship betwqeen Hirani and Dutt is Sanju the film.

Sanju is a film of two halves. The first one solely deals with Dutt's life as a 21-year-old man who is on the cusp of his making his acting debut, is doing drugs and dealing with the loss of a parent (Nargis Dutt played by Manisha Koirala). The second is constructed around Dutt's alleged connections to the underworld and the 1993 Mumbai bombings. The through-line connecting these two halves is the strained relationship shared by the older and younger Dutts.

The portrayal of this strained relationship is what breaks every sequence in the film into two halves as well. There is an unabashed maverick nature to every setup, and in sharp contrast, a tame and convenient bow-tie unmistakably looming over every payoff. The film seems terrified of telling the story without reminding the audience whose side it is on, and this discolours the overall experience of watching Dutt's story unfold because the filmmakers never let us meet the man behind the narrative. The thinly-veiled underselling has quietly led to overt overselling, and sooner or later, you are bound to feel short-changed by the movie's adherence to formula.

Between telling us that Dutt took drugs to mourn the ill-health of his mother, armed himself to protect his father and lost his friends due to suspect reporting, the film rarely hands over personal responsibility to the title character himself. This makes him lack agency, which adds to him being a passenger in his own biography. We can only imagine how hollow a character Sanjay Dutt would have been in the film had it not been for the exemplary Ranbir Kapoor.

The man might just be one of the best leading actors in films the world over. The level of depth his expressions, mannerisms and body language add to the character is spellbinding, to say the very least. There is the joy of a 20-year-old boy and the pain of a 50-year-old man behind those eyes, and how he manages to pull both off so convincingly is beyond us.

Vicky Kaushal and Paresh Rawal carry the bulk of the remaining acting work, and they are good in their own right. Were it not for their co-star and some convenient writing that has their characters flip on the dime, they could have been more than what the movie puts forward. On a side note, the female characters in the film are just that. A side note.

Barring the inspirational first song and the frankly hilarious number in the credits, the film's music too is nothing to write home about. There are long stretches of clichéd dramatic music that for the most past is hidden underneath the weight of Ranbir Kapoor's performance, and so is the movie's derivative visual grammar. Hirani's visual comedy is on point, as always, but everything around it is in a world of its own. A world less special. A world more familiar.

Toilet seats substituting for mangalsutras is Raju Hirani, melodrama is not. Addressing societal evils and faux pas with comedy taking centre stage is Raju Hirani, heavy-handed social commentary is not. Standing up for yourself with bones laid bare is Raju Hirani, multiple iterations of one singing the praises of his family are not. An objective take on the world we live in makes the bulk of a Raju Hirani film, and for some obvious reasons, Sanju cannot be that. It is neither great nor terrible - like the man himself, all it becomes is enigmatically ordinary. And to quote Sunil Dutt from the film, the camera is objective and sees all be it great acting or mediocre storytelling.
Share. Save. Connect.
Tweet
SANJU SNAPSHOT 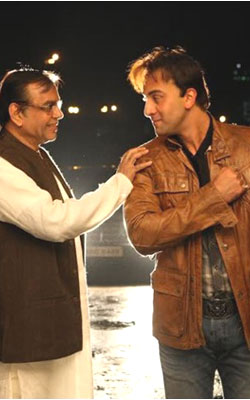 ADVERTISEMENT
This page was tagged for
Sanju hindi movie
Sanju reviews
release date
Ranbir Kapoor, Paresh Rawal
theatres list
Follow @fullhyderabad
Follow fullhyd.com on
About Hyderabad
The Hyderabad Community
Improve fullhyd.com
More
Our Other Local Guides
Our other sites
© Copyright 1999-2009 LRR Technologies (Hyderabad), Pvt Ltd. All rights reserved. fullhyd, fullhyderabad, Welcome To The Neighbourhood are trademarks of LRR Technologies (Hyderabad) Pvt Ltd. The textual, graphic, audio and audiovisual material in this site is protected by copyright law. You may not copy, distribute, or use this material except as necessary for your personal, non-commercial use. Any trademarks are the properties of their respective owners. More on Hyderabad, India. Jobs in Hyderabad.