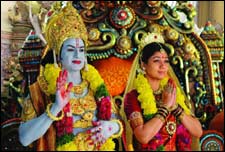 A still from Sri Rama Rajyam
Sri Rama Rajyam, a Telugu movie, is not currently screening in Hyderabad.
LATEST COMMENT
Phaneendra Kumar Pappu on 5th Jan 2012, 12:31pm | Permalink
I was initially very skeptical about watching this film because of Balayya. Thanks that I decided the other way at least yesterday.

The background score is one of the best in recent times. The whole magic is created by the maestro Ilayaraja. The visuals are good. They can be better yet. The grand palace of Rama was beautiful and very royal. But, the Valmiki Ashrama and the forest to be precise are very bad.

It is but natural to compare this with Lavakusa. That movie was a great one because of the performances purely. Here, Nageswara Rao provided the star power more than the performance. The songs in the older version are far more better. I missed the heart touching feel of "E nimishaniki emi jaruguno" song. Overall, Nayanatara's performance is the only thing that can be compared with a victory to this version.

At the end, I have to say that this film is way better than the other films that are coming out these days. A must watch...


Pros: Music, Nayanatara, Nageswara Rao and some VFX.
Cons: VFX.
0
0
USER RATING
8.0
See all comments
SRI RAMA RAJYAM REVIEW
Those who were rooting for Bapu win this one.

Sri Rama Rajyam is a remake of old-time classic Lava Kusa, and itself has the makings of a classic. The credit to this triumph goes to a man who could think of the whole rather than the sum of its parts. Wise move, that, sir.

The story of Sri Rama Rajyam is drawn from the Uttara Kanda of the Ramayana, which deals with the period after Lord Rama returns to Ayodhya after vanquishing Ravana in Lanka. All is well in the kingdom, until Rama hears of a washerman who doubts Sita's chastity. In fact, he has contempt for Rama t....

ADVERTISEMENT
This page was tagged for
Sri Rama Rajyam telugu movie
Sri Rama Rajyam reviews
release date
Nandamuri Balakrishna, Nayantara
theatres list
Follow @fullhyderabad
Follow fullhyd.com on
About Hyderabad
The Hyderabad Community
Improve fullhyd.com
More
Our Other Local Guides
Our other sites
© Copyright 1999-2009 LRR Technologies (Hyderabad), Pvt Ltd. All rights reserved. fullhyd, fullhyderabad, Welcome To The Neighbourhood are trademarks of LRR Technologies (Hyderabad) Pvt Ltd. The textual, graphic, audio and audiovisual material in this site is protected by copyright law. You may not copy, distribute, or use this material except as necessary for your personal, non-commercial use. Any trademarks are the properties of their respective owners. More on Hyderabad, India. Jobs in Hyderabad.