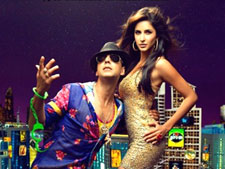 Kakoli Mukherjee / fullhyd.com
EDITOR RATING
5.5
Performances
Script
Music/Soundtrack
Visuals
6.0
5.0
5.0
6.0
Suggestions
Can watch again
No
Good for kids
Yes
Good for dates
Yes
Wait to rent it
Yes
Farah Khan does again in Tees Maar Khan (TMK) what she is good at doing - unapologetic not-so-pleasant references to other filmstars (Major Kumar suing her for OSO is still fresh in memory), parodies of recent hits, and a hotch-potch of all excesses, mannerisms and overtures that Bollywood stands for. If you have been a fan of Bollywood's maudlin affectations, and have been missing David Dhawan-type slapstick comedy for a while, you might find Tees Maar Khan quite palatable.

Tabrez Mirza Khan (Akshay Kumar) is Tees Maar Khan, a most-wanted conman who, a la Abhimanyu, learns the tricks of the trade while in his mother's womb as she watched Hindi crook movies, much to the chagrin of her cop husband. A trio of sidekicks flank TMK in every scene, who, apart from pulling gags and stealing their boss' mother's mobile phone, feed their leader's ego by hero-worshipping him at regular intervals. Ayna (Katrina Kaif) is TMK's sweetheart and a hare-brained wannabe starlet, whose penchant for minimal clothes and Shakira-like gyrations compensates for the lack of brains whatsoever.

The Johari brothers, a pair of conjoint Siamese twins, are notorious robbers, whose loot worth crores falls into the hands of the police. They hire TMK to rob it back, who plots an outrageous plan to pull off the heist, and makes an Oscar-crazy actor Aatish Kumar (Akshaye Khanna) and a whole lot of village simpletons pawns in his caper. TMK succeeds in hoodwinking the whole village and the filmstar, and even earns the respect of the villagers when he, quite unintentionally, solves the mystery of a headless ghost.

Farah Khan, clearly, isn't here to deliver something that she believes in, but to string together all the formula recipes that audiences have happily lapped up all through generations. In her checklist, it was comedy - checked, action - checked, melodrama - checked, patriotism - checked, skin show - checked, gay couple - checked, and bingo, you have Tees Maar Khan.

Though the film starts with a bang and progresses well till the interval where TMK sets the stage for his heist of a lifetime, the second half fizzles out considerably with the expert conman fumbling in confusion. Another loose thread is the character of Anya, who is popped into the story without much introduction and has nothing much more to do than a curvy showpiece. The Western world's fixation for handing out Oscars to movies that depict the penury of 3rd world countries has been satirized from every possible angle to the extent that a film ending with a scene of a villager defaecating is shown clinching an Oscar.

Akshay Kumar is, well, the quintessential Akshay Kumar here - he delivers the cheesy lines with elan and holds the film with his forte in comedy, an art that he has mastered well. It's high time that we saw him doing something different now. Katrina Kaif, as already mentioned, was categorically hired for loosing the extra flab round her midriff and flex it unabashedly, and she does exactly that.

Raghu and Rajiv perform well in their synchronised twins act. Arya Babbar, as the X-rated police officer of the village, does okay, and Apara Mehta as Akshay Kumar's mother might need some more time before she can pull off Bollywood's overtly-sentimental mother acts in a comic way like Kiron Kher does.

But the actor who steals the thunder from right under Akshay's nose is his namesake with an extra 'e', Akshaye Khanna. The usually sombre Khanna does a hell of a job of the superstar whose pet gripe is that Slumdog Millionaire went to Anil Kapoor because the latter's secretary made the mistake of confusing Danny Doyle for Danny Denzongpa. The jokes, PJs et al, don't seem far-fetched on him, and his hilarious pelvic thrusts and spoofing of Anil Kapoor's Jai Ho act provide the funniest moments in the film.

The music track of the movie by Vishal-Sekhar is a one-song wonder, and except "Sheila Ki Jawani", there is no song that leaves a mark on the listener.

This being a Farah Khan film, the songs are all slickly choreographed, and apart from the sensual moves of Sheila, the picturization of the song "Aadab Arz Hain" featuring Akshay Kumar and Salman Khan deserves a mention because of the flamboyance of both the stars, the sharara-clad Katrina and the old Hyderabadi charm that the song exudes.

Tees Maar Khan has comedy, oomph, pace and lots of colour, and is thoroughly enjoyable if you put your grey cells on hibernation mode for a couple of hours.

Is it me or is there something seriously wrong with the reviewer? I am a huge fan of Akshay Kumar and I give this film and 1 while this reviewier goes ahead and puts this film in the same bracket as Band Baaja Baraat!!!

Trust me, avoid this morbid travesty of movie making!

Sheela Ki Jawani is the one redeeming factor barring Akshay Kumar's (and Khanna's) performances in addition to some cheeky oneliners.

I would take up the plague to avoid this movie.

ADVERTISEMENT
This page was tagged for
tees maar khan movie in hindi kickass
Tees Maar Khan hindi movie
Tees Maar Khan reviews
release date
Akshay Kumar, Katrina Kaif
Follow @fullhyderabad
Follow fullhyd.com on
About Hyderabad
The Hyderabad Community
Improve fullhyd.com
More
Our Other Local Guides
Our other sites
© Copyright 1999-2009 LRR Technologies (Hyderabad), Pvt Ltd. All rights reserved. fullhyd, fullhyderabad, Welcome To The Neighbourhood are trademarks of LRR Technologies (Hyderabad) Pvt Ltd. The textual, graphic, audio and audiovisual material in this site is protected by copyright law. You may not copy, distribute, or use this material except as necessary for your personal, non-commercial use. Any trademarks are the properties of their respective owners. More on Hyderabad, India. Jobs in Hyderabad.