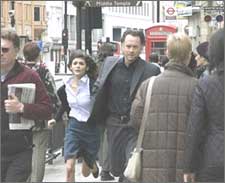 A still from The Da Vinci Code
The Da Vinci Code, an English movie, is not currently screening in Hyderabad.
LATEST COMMENT
Zinnia on 10th Aug 2006, 6:48am | Permalink
I think the main thing propelling your review is the fact you did not like the book. If you haven't been able to appreciate the finer points in the book, you'll be unable to notice the departures from the same in the movie and also places where the value additions have been made.

True, Hanks was stoney and Tatou was miscast. But the there was something engrossing about the entire thing.

All I can say is, there have been disasters at the block office and this aint one of 'em.
0
0
USER RATING
4.0
See all comments
THE DA VINCI CODE REVIEW


Let's establish this first – this is a loud, summer action film, and it has to be ridiculously over the top at times. But when in the first scene of the film, an old man, just having been gutted by Paul Bettany, and obviously dying, is leaving coded messages all over the Louvre, hanging a painting while bleeding from his stomach, you know it can't top itself. Then the old man proceeds to strip naked, draw a pentagram, and lie down to die in the classic Da Vinci pose. Hrrrm.

I have long heard the argument that some films are meant be enjoyed by leaving your brain out....

ADVERTISEMENT
This page was tagged for
The Da Vinci Code english movie
The Da Vinci Code reviews
release date
Tom Hanks, Audrey Tautou
theatres list
Follow @fullhyderabad
Follow fullhyd.com on
About Hyderabad
The Hyderabad Community
Improve fullhyd.com
More
Our Other Local Guides
Our other sites
© Copyright 1999-2009 LRR Technologies (Hyderabad), Pvt Ltd. All rights reserved. fullhyd, fullhyderabad, Welcome To The Neighbourhood are trademarks of LRR Technologies (Hyderabad) Pvt Ltd. The textual, graphic, audio and audiovisual material in this site is protected by copyright law. You may not copy, distribute, or use this material except as necessary for your personal, non-commercial use. Any trademarks are the properties of their respective owners. More on Hyderabad, India. Jobs in Hyderabad.