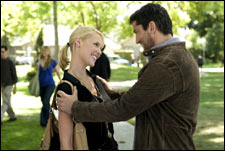 A still from The Ugly Truth
The Ugly Truth, an English movie, is not currently screening in Hyderabad.
LATEST COMMENT
AamchiHyd on 12th Sep 2009, 10:54am | Permalink
Not a good movie by any standards, but it was a bit of harmless fun for sure, considering its genre was raunchy humor, and not romantic (well, I guess they were going for a mix of both). Sexist for sure, but perhaps the intention was to play it for laughs, as most raunchy comedies aim to nowadays (truthfully, since the days of the 'Carry on' brigade, all the way to 'The Hangover', via the works of Apatow and his ilk), and is not meant to be taken in earnest. Doing so would constitue missing the point of this genre of comedy, esp. the aspects of dark/oddball humor (Zach Galifianakis' bare butt in our faces on the 70mm screen, anyone?). Being bloated and unkempt, Butler was 'in character', and I thought, he did a good job, within the confines of his material. However, as far as Heigl is concerned, she should perhaps take some notes from survivor Sandra Bullock (in this summer's trainwreck of a movie, 'All about Steve', she almost loses the audience, yet salvages a little something towards the end - was able to see that because I didn't walk out on cue, most of the audience did).


Pros: Butler, Some hilarious scenes, The host of the late late show doing his thang, Some interesting directions the script takes but never fully realizes
Cons: Lame/predictable/asinine plot, Boring/Familiar situations, The 'human' side of Butler's character, The 'too pat' ending
0
0
USER RATING
7.0
See all comments
THE UGLY TRUTH REVIEW
It is fascinating to think about Hollywood's general perception of women. Leading ladies in Hollywood romantic comedies are these high-strung, uppity women who are dominating control freaks. Also, these women are like this because they haven't been in bed with a proper man yet. Along will come a men's man who will bed her properly, exposing her vulnerable interior and need for manly support in her hollow, shallow life. This is what Hollywood would have us believe - and ironically, their target audience is women who would flock to these idiotic films setting new records in the process.

ADVERTISEMENT
This page was tagged for
The Ugly Truth english movie
The Ugly Truth reviews
release date
Katherine Heigl, Gerard Butler
theatres list
Follow @fullhyderabad
Follow fullhyd.com on
About Hyderabad
The Hyderabad Community
Improve fullhyd.com
More
Our Other Local Guides
Our other sites
© Copyright 1999-2009 LRR Technologies (Hyderabad), Pvt Ltd. All rights reserved. fullhyd, fullhyderabad, Welcome To The Neighbourhood are trademarks of LRR Technologies (Hyderabad) Pvt Ltd. The textual, graphic, audio and audiovisual material in this site is protected by copyright law. You may not copy, distribute, or use this material except as necessary for your personal, non-commercial use. Any trademarks are the properties of their respective owners. More on Hyderabad, India. Jobs in Hyderabad.