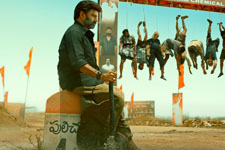 T J Reddy / fullhyd.com
EDITOR RATING
3.0
Performances
Script
Music/Soundtrack
Visuals
5.0
2.0
3.0
2.0
Suggestions
Can watch again
No
Good for kids
No
Good for dates
No
Wait for OTT
Yes
30 Rock is one of the greatest sitcoms ever made. One of the episodes of this incredible work of art has a hilarious bit with a fake TV show titled God Cop. The logline of this show is "A New York detective solves crimes with his new best friend *pause for effect* God!"

Now, you may ask yourself, "Does God just tell the detective who this criminal is?" or "If God is around, why doesn't he stop the crimes in the first place?" To that, I'd say, "No mere mortal can understand the Almighty's mysterious ways." There is no logic or reason attached to God and his actions. The adage "Life is 10% what happens to you and 90% how you react to it" exists for this reason.

You might wonder how this preamble connects to a review of Veera Simha Reddy. Because I'm a mere mortal, I'll explain myself. My actions need to have reasons and logic associated with them. How unlucky we all are.

Nandamuri Balakrishna, aka NBK aka Balayya aka God, stars in Veera Simha Reddy. Before anyone accuses me of blasphemy against your religion of choice, I'd like to defend myself by pointing out that every character in this film refers to our leading man as a God. If this group of people believe in this idea, who am I to tell them otherwise?

Anyway, Veera Simha Reddy is the bestest God who ever existed in Rayalaseema. Jai, also played by Balayya, is the bestest God that ever lived in Istanbul. The former has an opposing faction led by Pratap (Duniya Vijay) and Bhanumathi Reddy (Varalakshmi Sarathkumar) out for his head. The latter has a girlfriend (Eesha, played by Shruti Hassan) he wants to marry. How do these plots intersect? How are these two Balayyas related? The answers to all these and more will reveal themselves to you if you survive the Earth-shattering sound mix and logic-defying screenplay.

Reviews for bad/poorly-made star-led films have a few template headlines - "One man show", "Treat for the fans", and other platitudes of the ilk. These lines exist as an easy dodge to avoid addressing the issue that no other actor has a character to perform. The lines given to them fall on either side of the diagonal "You're so awesome, I love you" to "You're so awesome, I need to kill you". While this film has many characters like that, I want to pour one out for the saddest villain I've ever seen.

Pratap Reddy could have been a garden-variety evil guy with no motivation. But he does have a reason to lash out the way he does. His wife forbids him from sleeping with her until he kills our hero. This man would have attacked Balayya once, lost the fight, and lived happily ever after. But, under these circumstances, he must prove his mettle against our hero whenever he's in the mood. A case of blue balls used as an over-the-top villain's motivation is tragic and comical. Throughout the film, he loses half a dozen fights on course to dying a virgin. Excellent!

Our God has no such issues. He is God, after all. He has nothing to learn, no obstacles to overcome, no vices and malice. He is successful in both Rayalaseema and Istanbul-seema. He runs an uber-successful ragi ball-chicken curry place in Istanbul with his mother, who is half his age in the real world. There I go questioning his actions again. How foolish am I?

I question these things because I'm approaching the film with a rational mind. When dealing with deities, you need only come with faith. Ask for fight scenes with stunt performers dragged around by wires to accentuate our hero's aura, and you'll hear a thathastu. Ask for punch dialogues that satisfy an audience's need for excess (athi), and a thathastu rings through your ears again. Pray for up-skirt and down-blouse shots of women while hearing sermons about culture, and your wishes will come true with a cheeky thathastu.

Ask for anything more, and you're forgetting the rule of dealing with God. To paraphrase, "Do your duty by going to the theatre. Don't be greedy and ask for stupid things like a plot, story, or characters." God knows what's best for you. A scene with Seema rowdies walking out of an Istanbul metro station carrying katthulu is best for you. Ask for more of them next time.

He knows what's best for him, too. That's why the performances in all his films remain the same. If everything keeps working out for him and us, why change it? The non-believers can laugh at it all they want; they're losing out while we marinate in awesomeness.

A purohit, imam or pastor could lead a congregation, but we go to a place of worship for the idol. Shruti Hassan, Honey Rose, Lal, Naveen Chandra, and Ravishankar act as leaders who conduct sermons. No one came for them, but we tolerate their annoying intrusions as an occupational hazard. On a side note, I dare anyone to tell me the names of the characters played by Sapthagiri, Ajay Ghosh and Rajeev Kanakala.

We need loud noises and bright colours at places where the man, the myth and the legend appear. Your focus must be on him, and the film screams at you until it has your undivided attention. Should a quiet romantic scene or a woman talking about her estranged husband be at a lower pitch? No. People need to know this is the most important story ever told, so we keep reminding them of it instead of telling them the story. It is a strategy that works every time. One on our A/V dial is ten on someone else's. Just imagine what happens when we turn our dial to eleven.

This film obtained a U/A certificate. It has two beheadings, more curses than I used in college, a lot of almost-T and just-about-A. I grew up watching films like this, and I turned out... moderately well-adjusted. I want to understand the censor board and its thought process behind awarding films their ratings. On second thought, I realize it is as much of a fool's errand as trying to comprehend the first twenty minutes of this film.

90% of my reaction to the 10% of watching this film is one of empathy. Sitting in a crowded theatre helped me indulge in the experience of witnessing this masterwork. I could see the movie through the eyes of a devotee. However, their eyes attached themselves to a brain brimming with devotion. They could turn off their logic and reason once they stepped into the hall because they wanted a good time. I reviewed Jai Simha, the two NTR biopics, and Akhanda. That's five Balayya devotional epics, including this one. Soon, I'll share the devotee's frame of mind, and then I'll be happy, too.

PS: A song titled Jai Balayya exists in a film where no character is named Balayya. True devotion is not asking why this is.
Share. Save. Connect.
Tweet
VEERA SIMHA REDDY SNAPSHOT 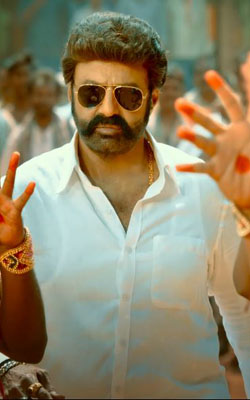 See Veera Simha Reddy full details
VEERA SIMHA REDDY USER REVIEWS
1 - 3 OF 3 COMMENTS
POSITIVE  |  NEGATIVE  |  NEWEST  |  OLDEST  |  MOST HELPFUL  |  LEAST HELPFUL
Ravi on 13th Jan 2023, 2:02pm | Permalink
Living in a foreign land, I need an unbiased review before spending my hard earned 15 pounds (yes, I'm stingy). Full Hyderabad had always been my reliable source, although of late, the reviews' standard has dropped a bit. It's nice to see you back T J Reddy! Full hyderabad movie reviews are back on track. This is how an honest review should be, unswayed by the uproar in the auditorium. Kudos!
Anonymous on 14th Jan 2023, 11:33am | Permalink
Hi Ravi, It would be fantastic if you could also provide your ratings.
TJ Reddy on 14th Jan 2023, 9:23am | Permalink
15 pounds is no small amount, Ravi. Everyone gets to choose what the best value for their money is. We wouldn't go to a bad restaurant knowingly now, would we?

In regards to other reviewers on the site, they have their perspectives and they articulate them quite well. A review is one person's informed opinion and we just find whose tastes align with our own.

ADVERTISEMENT
This page was tagged for
Veera Simha Reddy telugu movie
Veera Simha Reddy reviews
release date
Nandamuri Balakrishna, Honey Rose
theatres list
Follow @fullhyderabad
Follow fullhyd.com on
About Hyderabad
The Hyderabad Community
Improve fullhyd.com
More
Our Other Local Guides
Our other sites
© Copyright 1999-2009 LRR Technologies (Hyderabad), Pvt Ltd. All rights reserved. fullhyd, fullhyderabad, Welcome To The Neighbourhood are trademarks of LRR Technologies (Hyderabad) Pvt Ltd. The textual, graphic, audio and audiovisual material in this site is protected by copyright law. You may not copy, distribute, or use this material except as necessary for your personal, non-commercial use. Any trademarks are the properties of their respective owners. More on Hyderabad, India. Jobs in Hyderabad.