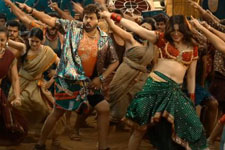 T J Reddy / fullhyd.com
EDITOR RATING
5.0
Performances
Script
Music/Soundtrack
Visuals
7.0
3.0
4.0
4.0
Suggestions
Can watch again
No
Good for kids
Yes
Good for dates
Yes
Wait for OTT
No
There were a few fun coincidences with yesterday's release Veera Simha Reddy and today's Waltair Veerayya. The films have the same producer and leading lady, and a shared Sapthagiri. I wonder what financial sense it makes for the same production house to release two movies over a weekend. I'm not a big-brained accountant, so I'll stick to my forté of reviewing movies.

Talking about Waltair Veerayya, one can categorize it as an exercise showing the power of Chiranjeevi's charm. Let me tell you what we mean by that. The film follows the life and times of a hired goon whose task is to abduct a drug kingpin from Malaysia. The twist in the tale is that a police officer recruits the ruffian (Veerayya, played by Chiranjeevi). The whys and hows of this setup form the rest of the plot.

Like with all films, let's start judging this one with a rating of five out of ten. It is perfectly balanced, as all things should be.

Writer/director Bobby Kolli comes up with a gripping premise and casts a star actor to lead the line. For his part, this is the best Chiranjeevi has looked and felt since his comeback to films. There is looseness and charm to his performance that has been sorely lacking for nearly half a decade. We chalk up this change in presentation to his director's choice of making a masala potboiler sans social messages.

However, the twists and turns in this masala film could give the late K V Anand's films a run for their money. To keep his movie pacy, Bobby Kolli packs his frames and screenplay with many characters and plot points. With inadequate time allocated to exploring each plot thread to its fullest, the film feels rushed and long simultaneously.

Bobby Kolli's love for his leading man is evident in every frame. He truly understands what made Chiranjeevi the star he was in the '90s and '00s. One of the primary reasons audiences gravitated to him was his ability to connect to the common man in his massive fanbase. As an actor who walked into the industry as a nobody, he possessed a knack for knowing what people needed from their onscreen heroes. In Waltair Veerayya, he is okay with being the butt of the joke. He is okay with letting his character fail multiple times and then learning from those failures. He is okay with being a man instead of a demigod. A return to watching this Chiranjeevi flex his performing chops had my theatre in splits more often than they'd like to admit. His acting prowess holds together many awkwardly rendered scenes.

However, the makers of Watlair Veerayya wanted to have their cake and eat it too. The statement "you can't have too much of a good thing" is false. If I baked you five birthday cakes and forced you to eat all of them in one sitting, you'd understand why you can have too much of a good thing. The filmmakers add a cavalcade of misplaced songs and unnecessary sequences that stick out like sore fingers instead of one sore thumb. One is forgivable, two is ignorable, but multiple is where "I can't stand no more". Everything shoved down my throat comes out with a vengeance.

Ravi Teja and the supporting cast seem to be having a blast plying their trade in this project. Ravi Teja's love for Chiranjeevi is well-documented, and he takes his chance to act alongside his idol with both hands. There is a snap in his step and a light behind his eyes which isn't fake. The scenes they share breathe life into a dreary second half that struggles to justify its existence.

However, if having a blast while working was the only criterion, every theme park employee would have no gripes on their lives at any moment. Prakash Raj, Bobby Simha, Shruti Hassan, John Vijay, Sapthagiri, Rajendra Prasad, Sathyaraj and other capable actors remain underused. Having a large ensemble requires the writer to add character traits to each actor. Bobby Kolli has an army of familiar faces who become part of the crowd as the minutes tick on. Poor Pradeep Rawat gets one line in the whole film. He is more set dressing than a character. For a second, I forgot that Catherine Tresa is a part of the cast too. Oh s**t, I missed mentioning Nassar.

This outcome seems inevitable as the film has two halves with two separate stories, with two beginnings and middles, and ends with very little narrative tissue connecting them. With minimal time afforded to characters and their worlds, Veerayya adda feels more like a set than a location.

I could play this game with this movie for hours. Poonakalu Loading is a fun song with incredible choreography. +1. The score leaves much to be desired, and the song placement is atrocious. -1.

Hero shots and costume design for Chiranjeevi are on point for the character he portrays. +1. The CGI shots across the film look like they've escaped a PS2 cutscene. -1.

The ending of the first half is so over the top and fun that you forget to question the logic of a group of people dancing around a violent act. +1. The ending of the second half is so stupid and rushed that it makes you reconsider everything you liked about the two hours and thirty minutes that came before it. -1.

Shruti Haasan's character has a cool twist to it. +1. The makers butcher their own ideas again. -1.

One of my fondest memories of watching a movie as a kid was seeing Indra play out in an almost-dilapidated, now-defunct single-screen theatre in Bangalore. The audience's roar and the film's pitch matched each other beat by beat. Watching Tagore over and over and over and over again on TV reruns was my happy place. That little boy loved watching this Chiranjeevi back on screen again.

However, that boy is now a part of an adult. The grown-up can see through lazy writing, poor plotting and bad story-telling. For every point the boy gives, the adult has a reason to take it away. Waltair Veerayya is a film made by a fan as an ode to his idol. Like Rajnikanth's Petta, you choose how much of the movie you want to love, forgive, and dislike.
Share. Save. Connect.
Tweet
WALTAIR VEERAYYA SNAPSHOT 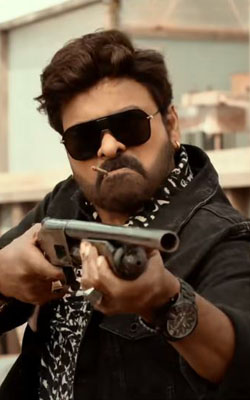 ADVERTISEMENT
This page was tagged for
Waltair Veerayya telugu movie
Waltair Veerayya reviews
release date
Chiranjeevi, Ravi Teja
theatres list
Follow @fullhyderabad
Follow fullhyd.com on
About Hyderabad
The Hyderabad Community
Improve fullhyd.com
More
Our Other Local Guides
Our other sites
© Copyright 1999-2009 LRR Technologies (Hyderabad), Pvt Ltd. All rights reserved. fullhyd, fullhyderabad, Welcome To The Neighbourhood are trademarks of LRR Technologies (Hyderabad) Pvt Ltd. The textual, graphic, audio and audiovisual material in this site is protected by copyright law. You may not copy, distribute, or use this material except as necessary for your personal, non-commercial use. Any trademarks are the properties of their respective owners. More on Hyderabad, India. Jobs in Hyderabad.