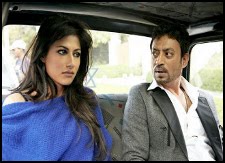 Kakoli Mukherjee / fullhyd.com
EDITOR RATING
6.0
Performances
Script
Music/Soundtrack
Visuals
8.0
8.0
7.0
7.0
Suggestions
Can watch again
Yes
Good for kids
No
Good for dates
Yes
Wait to rent it
No
With characters who turn from grey to white, and to black in the blink of an eye, and plots, flashbacks and subplots that criss-cross each other at break-neck speed, Yeh Saali Zindagi keeps you hooked to the screen with its overwhelming pace. The tangling and untangling of incidents take place parallely, and before you can complain that you have too much in your hands, another jaw-dropping turn absorbs you in its wraps.

Sudhir Mishra tries to capture life's capricious temperament through three main protagonists who are twisted, tossed aside and revived again in the labyrinth of their own desires and actions. The story is not about caricatures who behave in a set pattern in the halo of their characters, but about a very human bunch who take life by the horns.

So we have Arun (Irrfan Khan), a gifted fraudster who multiplies his pudgy boss' fortunes exponentially with his embezzling skills, and nearly loses everything when he falls head over heels in love with a singer, Priti (Chitrangda Singh). Priti, a self-assured and level-headed woman, cozies up to a rich man's brat after Arun cannot articulate his feelings well, and finds herself in the midst of an intriguing kidnap drama.

This kidnap drama is master-minded by Kuldeep (Arunoday Singh) in a desperate bid to prevent his wife and kid leaving him because of his wayward nature. Though his wife pleads him and slaps him to come back to a respectable way of living, Kuldeep finds himself being sucked deeper into the murky quagmire of underworld.

From this underworld emerge a number of quirky characters who contribute in their own ways to make up the soul of Yeh Saali Zindagi. There are these two brothers, Bade and Chhote, who love and hate each other alternately in the pursuit of money stashed away in Swiss banks. Working hand in gloves with this underworld is the ignoble cop, Satbeer (Sushant Singh), who provides the most delicious twist in the climax of the story.

And that is not the only twist in the story. Sudhir Mishra's taut writing sprinkles surprises and bumps liberally to keep the viewer on the edge of his seat, and the freewheeling use of Hindi cuss words (mostly beeped out by the Censor) do not seem inappropriate in the context of a film showcasing a slice of Delhi's underbelly. Even the love-making scenes between Kuldeep and his wife Shanti (Aditi Rao Hyderi) are shot intensely and with a sense of urgency, as if not to punctuate heavily the flow of the movie.

Holding together the film's flow firmly in their hands is the cast, who shape Mishra's writing into flesh and blood, doing full justice to the mercurial characters. Whether he is manhandling his boss, or locking horns with the kidnapper for his beloved, Irrfan Khan is brilliant while acting in his trademark restrained style. Chitrangda Singh oozes glamour while being reticent, and portrays Priti deftly who does not lose her cool even after committing a murder, but a bit more spontaineity would have pushed her performance a notch higher.

Arunoday Singh, who had an itsy-bitsy role in Aisha, is a revelation here. He impresses as the brawny gangster who kills unbashedly, but breaks down when his wife threatens to leave him. His rustic appealand unconventional looks make him fit the role to a tee.

Aditi Rao Hyderi, as the wife of the ganster torn between her principles and love for her husband, presents an avatar very different from that in Delhi 6.

Nishat Khan's music forms not only a part of the story, but becomes the story itself at times, and blends into the mood of the movie effortlessly.

The cinematographer, Sachin Kumar Krishnan, presents Delhi's bright exteriors and dark alleys beautifully, and the camera angles work in sync with the convulated presentation of the story.

Yeh Saali Zindagi is a dark, racy film which does not white-wash anything, and will be a treat for someone looking for stimulating cinema. Give it a shot if you are in mood for an overwhelming thriller.
Share. Save. Connect.
Tweet
YEH SAALI ZINDAGI SNAPSHOT

ADVERTISEMENT
This page was tagged for
Yeh Saali Zindagi hindi movie
Yeh Saali Zindagi reviews
release date
Irrfan Khan, Chitrangda Singh
theatres list
Follow @fullhyderabad
Follow fullhyd.com on
About Hyderabad
The Hyderabad Community
Improve fullhyd.com
More
Our Other Local Guides
Our other sites
© Copyright 1999-2009 LRR Technologies (Hyderabad), Pvt Ltd. All rights reserved. fullhyd, fullhyderabad, Welcome To The Neighbourhood are trademarks of LRR Technologies (Hyderabad) Pvt Ltd. The textual, graphic, audio and audiovisual material in this site is protected by copyright law. You may not copy, distribute, or use this material except as necessary for your personal, non-commercial use. Any trademarks are the properties of their respective owners. More on Hyderabad, India. Jobs in Hyderabad.