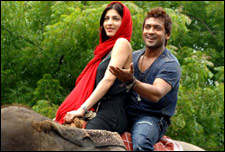 A still from 7th Sense
7th Sense, a Telugu movie, is not currently screening in Hyderabad.
LATEST COMMENT
pradeep- on 2nd Nov 2011, 3:50pm | Permalink
This is one of nice movies that have been by me.
I feel actor surya is very apt for this kind of role -
When i thought i was disappointed watching ra.one .. 7th sense provided some sense in the mush ..

This is one of the movies that has a vision.
Movie being released in so many theaters made me take a cue ..! (i know it was something to do with martial art)
The movie is a mix of india overall in ancient pitfalls and future direction ...
It reminds us something that is forgotten since age-s..
Elite movie patrons like murugudas., surya and shruthi hasan have done nice job in bringing legend back ..! !

This movie stands away from rest in the sense that it is sort of relevant in bringing up india's treasure and china's lost vision..!

China's conquest attitude is portrayed in a martial art fashion and indian counterpart played a decent role being origin of martial arts himself.


Pros: martial arts, script, shruti's narration was neat too..
Cons: less cons i can think of
0
0
USER RATING
7.0
See all comments
7TH SENSE REVIEW
Murugadoss's answer to his big Diwali rival, Anubhav Sinha's faux-programmed videogame-y super-hero outing, is pretty interesting, while being spoken in a similar language of fantasy. Stick to the basics, and never misuse your lead actor, however big a superstar he may be. And while you're at it, sell desi real hard and bash our enemies up (if 7th Sense is any indication, the Chinese are the new Pakistanis in our cinema).

7th Sense (no, there's no explanation of why it is named that) is part socio-fantasy, part science fiction, part period and part standard-issue masala, whic....

ADVERTISEMENT
This page was tagged for
7th sense movie
7th Sense telugu movie
7th Sense reviews
release date
Suriya, Shruti Haasan
Follow @fullhyderabad
Follow fullhyd.com on
About Hyderabad
The Hyderabad Community
Improve fullhyd.com
More
Our Other Local Guides
Our other sites
© Copyright 1999-2009 LRR Technologies (Hyderabad), Pvt Ltd. All rights reserved. fullhyd, fullhyderabad, Welcome To The Neighbourhood are trademarks of LRR Technologies (Hyderabad) Pvt Ltd. The textual, graphic, audio and audiovisual material in this site is protected by copyright law. You may not copy, distribute, or use this material except as necessary for your personal, non-commercial use. Any trademarks are the properties of their respective owners. More on Hyderabad, India. Jobs in Hyderabad.