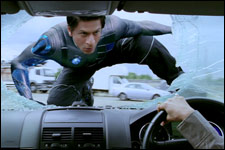 A still from Ra.One Telugu (G.One)
Ra.One Telugu (G.One), a Telugu movie, is not currently screening in Hyderabad.
LATEST COMMENT
singhprashast2011 on 9th Sep 2015, 8:32pm | Permalink
Ra.one is definitely the best film of all time.The way it has used all the elements of an entertainer,it deserves not just praise,but also a watch by all ages.

The way of imagining a game in real life,and that too a superhero game in which the villain is comparatively more powerful than the hero is amazing and heart winning.The VFX and action,along with a tight story and screenplay, music,performances make it a sure shot winner,which not only entertains but also wins hearts.The concept of bringing virtual characters into the real world using their action figures and computers is a thing I'd surely appreciate.I won't say much as I have already described how much I liked this movie.

On the whole,RA.One is the finest film that comes from the Indian film industry that deserves repeated watches and praises.A HART winner!


Pros: Entire movie; visual effects, action, music, performances, everything!
Cons: Nothing at all!
1
0
USER RATING
10
See all comments
RA.ONE TELUGU (G.ONE) REVIEW
An Indian superhero film about the notion of rebirth and karma seen through the prism of science, the eternal battle between good and bad re-enacted by man's own creation, and a thematic statement about man's evil being his own hubris, is the kind of grandiose science fiction superhero film we've always wanted.

It's unfortunate, but RA.One squanders the chance to make any sort of statement, with its use of technology a mere crutch to hold its superhero film on. The six (six!) writers credited for the film never manage to cre....

ADVERTISEMENT
This page was tagged for
Ra.One Telugu (G.One) telugu movie
Ra.One Telugu (G.One) reviews
release date
Shah Rukh Khan, Kareena Kapoor
theatres list
Follow @fullhyderabad
Follow fullhyd.com on
About Hyderabad
The Hyderabad Community
Improve fullhyd.com
More
Our Other Local Guides
Our other sites
© Copyright 1999-2009 LRR Technologies (Hyderabad), Pvt Ltd. All rights reserved. fullhyd, fullhyderabad, Welcome To The Neighbourhood are trademarks of LRR Technologies (Hyderabad) Pvt Ltd. The textual, graphic, audio and audiovisual material in this site is protected by copyright law. You may not copy, distribute, or use this material except as necessary for your personal, non-commercial use. Any trademarks are the properties of their respective owners. More on Hyderabad, India. Jobs in Hyderabad.