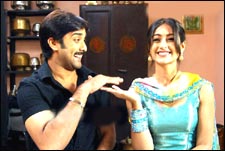 A still from Bhale Dongalu
Bhale Dongalu, a Telugu movie, is not currently screening in Hyderabad.
LATEST COMMENT
Ravi U on 30th Apr 2008, 8:39pm | Permalink
what a liberal copy from Bollywood?? donno how it looks to people who din't c the original version. Jagapati babu may be apt for his role..
0
0
USER RATING
2.0
See all comments
BHALE DONGALU REVIEW


Three words: Bunty Aur Babli. Actually, about three dozen more - Bunty Aur Babli minus the surprises, the cast, kajra re, Gulzar, Shankar-Ehsaan-Loy and just about everything that made that movie a hit. Also, add about 30-45 minutes of surplus fat in terms of duration, and a slightly tacky, low budget, feel.

Not that it's so bad that it's unwatchable. Bhale Dongalu is definitely easier on the eyes and ears than, say, Poramboku or Singamalai. But that's a bit like saying it's preferable to die of natural causes than of snakebite.

ADVERTISEMENT
This page was tagged for
Bhale Dongalu telugu movie
Bhale Dongalu reviews
release date
Tarun, Ileana
theatres list
Follow @fullhyderabad
Follow fullhyd.com on
About Hyderabad
The Hyderabad Community
Improve fullhyd.com
More
Our Other Local Guides
Our other sites
© Copyright 1999-2009 LRR Technologies (Hyderabad), Pvt Ltd. All rights reserved. fullhyd, fullhyderabad, Welcome To The Neighbourhood are trademarks of LRR Technologies (Hyderabad) Pvt Ltd. The textual, graphic, audio and audiovisual material in this site is protected by copyright law. You may not copy, distribute, or use this material except as necessary for your personal, non-commercial use. Any trademarks are the properties of their respective owners. More on Hyderabad, India. Jobs in Hyderabad.