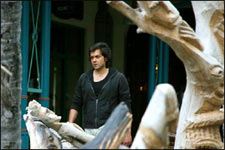 A still from Help
Help, a Hindi movie, is not currently screening in Hyderabad.
LATEST COMMENT
Swapan Dhar on 18th Aug 2010, 9:37pm | Permalink
Well, if you are an Indian, you will enjoy this movie (not one of the best though). Not a new concept but the movie is better than Phoonk. Some of the scenes are copied from movies like 'The Grudge', 'The Mirrors', etc.
0
0
USER RATING
6.0
See all comments
HELP REVIEW
Help is a flick that at least aspires for a higher cause - one that moves beyond piercing your eardrums. It, thus, doesn't completely shame its posters - the ones that say it is the most chilling movie of the decade, or some such thing.

But then, it is pretty much a multiplex offering, with less-than-big stars, not much flamboyance backing its idea, and execution that cannot be claimed to have been a perfectionist's effort.

The plot takes off from familiar ground, into familiar skies. Pia (Mugdha Godse) and Vic (Bobby Deol) are having a stressful marriage, and to t....

ADVERTISEMENT
This page was tagged for
Help hindi movie
Help reviews
release date
Bobby Deol, Mugdha Godse
theatres list
Follow @fullhyderabad
Follow fullhyd.com on
About Hyderabad
The Hyderabad Community
Improve fullhyd.com
More
Our Other Local Guides
Our other sites
© Copyright 1999-2009 LRR Technologies (Hyderabad), Pvt Ltd. All rights reserved. fullhyd, fullhyderabad, Welcome To The Neighbourhood are trademarks of LRR Technologies (Hyderabad) Pvt Ltd. The textual, graphic, audio and audiovisual material in this site is protected by copyright law. You may not copy, distribute, or use this material except as necessary for your personal, non-commercial use. Any trademarks are the properties of their respective owners. More on Hyderabad, India. Jobs in Hyderabad.