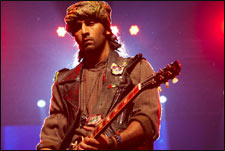 A still from Rockstar
Rockstar, a Hindi movie, is not currently screening in Hyderabad.
LATEST COMMENT
sekar on 18th Nov 2011, 1:44pm | Permalink
The story is obsessed to show that jj is depressed and from only depression one can get a kalakar. wat a crap....... Ranbir, one of the khandani actor rubbed on audience, is still having problems with emotions. lastly, all the songs are same


Pros: visuals and fresh nargis
Cons: performances by nargis and ranbir
0
0
USER RATING
4.0
See all comments
ROCKSTAR REVIEW
Go watch this film. That's the best advice I can give you.

It is easy to get into the defects - the music is informed by the locations, but never the emotions of the lead, never get....