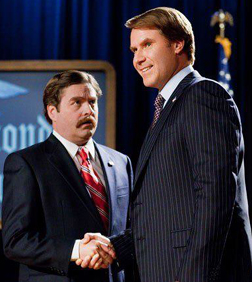 A still from The Campaign
The Campaign, an English movie, is not currently screening in Hyderabad.
THE CAMPAIGN SYNOPSIS
Four-time Congressman Cam Brady (Will Ferrell) is running for elections for the fifth time, and there's nothing that can stop him, considering his legendary status as a Congressman. Only, he keeps tripping on his own toes. His blunders goad two corrupt industrialists into introducing a rival, Marty (Zach), for the same post. They hope to win the election and use Marty for personal gains. But Marty isn't really as dumb as he seems.
THE CAMPAIGN REVIEW
The Campaign is here, and amidst the everyday political satire that Indians are living through, they can finally get more of their "Americans are dumb, lets guffaw at them" fix.

Is it funny? Yes. If people slipping on banana peels sets you off into peals of laughter.

Is it the hard-hitting lampoon on the mare di merda of elections we've all been waiting for? Hell, no.

A four-time Congressman, who's been elected every year by default, is running again, without an opponent. Easy peasy right? Apparently not so much for Cam Brady (Will Ferrell).... 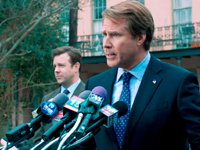 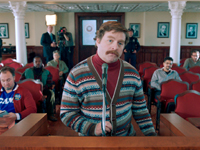 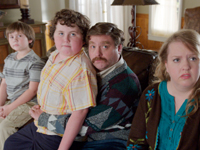 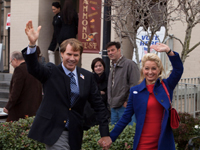 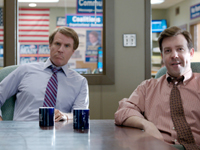 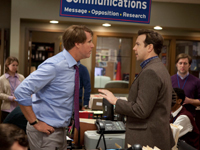 ADVERTISEMENT
This page was tagged for
The Campaign english movie
The Campaign reviews
release date
Will Ferrell, Zach Galifianakis
theatres list
Follow @fullhyderabad
Follow fullhyd.com on
About Hyderabad
The Hyderabad Community
Improve fullhyd.com
More
Our Other Local Guides
Our other sites
© Copyright 1999-2009 LRR Technologies (Hyderabad), Pvt Ltd. All rights reserved. fullhyd, fullhyderabad, Welcome To The Neighbourhood are trademarks of LRR Technologies (Hyderabad) Pvt Ltd. The textual, graphic, audio and audiovisual material in this site is protected by copyright law. You may not copy, distribute, or use this material except as necessary for your personal, non-commercial use. Any trademarks are the properties of their respective owners. More on Hyderabad, India. Jobs in Hyderabad.