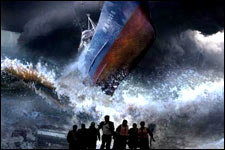 About 15 people are stuck in a derelict, water-logged, building, with rain lashing outside and a raving tsunami throwing up assorted ships and other vehicles onto the building.
(FH reviewer thinking: If the wind can blow ships into building, why isn't it blowing the building away?? Oh, okay, it is a movie after all and the hero is rather good looking to die!)

Little kid (who knows where he came from) points at a fish-bowl and begins to cry for it, stupid-grown-man jumps in to the waist deep water to get it and begins to drown. Three others join in.
(FH reviewer thinking: Even in China!!!)

(The director realizes at this point that the characters do not have enough difficulties) The tsunami throws in a shark, which promptly starts looking for a leg to bite. Suddenly there are wooden sticks everywhere and the next 5 minutes are spent hitting the shark and eventually driving it away.
(FH reviewer thinking: Sheesh!! We would have shown the hero wrestling with the shark, that atleast would have been some gore. What is the director even trying to show here?!)

2010 Tsunami returns demonstrates for us that disasters in China too require the same paraphernalia as in the US: smart and good-at-heart mayor (or President / any other chief), scientist-lady with flashback related to the chief, poor people with lives at stake and a 15-minute solution to save them all.

The movie is about a Chinese town, with a good-looking mayor (Wu Gang) in smart suits, inhabited by about 50 people, with two of them stranded on an island. The other billion-plus people in China have refused to be involved in anyway with this movie.

So this town is about to be hit by a tsunami, say the weather experts, and the mayor wants to ensure everyone's safety. They are faced with two options: relocate the people to safer areas or just hope the tsunami will pass by, not harming them at all.

After about 10 minutes of trying very hard to change the expression on his face, the mayor decides to move the people. He runs about hither-thither, trying to convince people that he is not bluffing about the tsunami and that he cannot help if his face can show only one emotion.

When he finally establishes his point, he and majority of the town's people take refuge in a building, braving the rain splashing through the windows, and emerge in neatly-ironed clothes only on the following morning, with the sun beating down on the roof-tops.

There are by-stories of a pregnant woman stuck on an island and the mayor sending a chopper to pick her up, and a maverick photographer with the sole aim of clicking the pictures of a tsunami, which will only make you fidget more in your seat.

Despite being unaware of the level of complexity in Chinese cinema generally, we are sure 2010 is a ridiculously simple narration about the tsunami. Even for a regular Bolly / Tollywood follower, there are too many things to ignore for the movie to be plausible.

There are a significant number of special effects used, and with good effect - the tsunami scenes do look pretty real. But that apart, there is nothing worth noting about the movie - the actors are all equally good, looking poker-faced most of the time.

If the claims that this movie is China's first disaster-themed, special-effects-driven blockbuster with an initial investment of around 50 million Yuan do not excite you enough, we think it is normal - stick to the safety of Discovery instead.

ADVERTISEMENT
This page was tagged for
tsunami returns movie Japan
2010 Tsunami Returns (Telugu) telugu movie
2010 Tsunami Returns (Telugu) reviews
release date
Wu Gang, Song Xiaoying
Follow @fullhyderabad
Follow fullhyd.com on
About Hyderabad
The Hyderabad Community
Improve fullhyd.com
More
Our Other Local Guides
Our other sites
© Copyright 1999-2009 LRR Technologies (Hyderabad), Pvt Ltd. All rights reserved. fullhyd, fullhyderabad, Welcome To The Neighbourhood are trademarks of LRR Technologies (Hyderabad) Pvt Ltd. The textual, graphic, audio and audiovisual material in this site is protected by copyright law. You may not copy, distribute, or use this material except as necessary for your personal, non-commercial use. Any trademarks are the properties of their respective owners. More on Hyderabad, India. Jobs in Hyderabad.