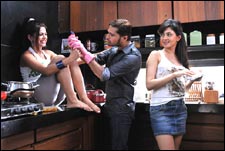 Deepa Garimella / fullhyd.com
EDITOR RATING
3.0
Performances
Script
Music/Soundtrack
Visuals
5.0
3.0
6.5
7.0
Suggestions
Can watch again
No
Good for kids
No
Good for dates
Yes
Wait for OTT
Yes
Radio is in that category of movies that needs the following elements to work commercially - sharp writing, a gargantuan marketing effort, a huge star cast, a talented star cast, a popular star cast, and an audience.

Making a movie in a genre that Rahul Bose would cream with one hand tied behind his back, and targeting an exclusive section of the audience - urban youth - is obviously backfiring on Radio. Because, unfortunately, no one enters the theatre without presuming it's some sort of a joke. And even more unfortunately, few leave disappointed.

Radio is the story of a man being torn apart - between his past and his future, between 2 gorgeous women who love him, between love and sympathy, and between 2 expressions. Himesh Reshammiya has charisma and earnestness, but his experiments in diversifying his range of work are better left on the drawing board.

The film starts off with RJ Vivan (Himesh Reshammiya) fresh out of a painful divorce, when he's given a chance to realize that there are certain things in life more haunting than handling a court-ruled split. No, not a ticket to this movie, but the chirpy optimist Shanaya (Shenaz), who falls in love with him.

The managers of Vivan's radio station (98.3 Mirchi, no less), meanwhile, stumble upon a brainwave. They feel that Shanaya could be an asset to the ratings, if she were to be cast in a staged romance between Vivan and an anonymous caller (Shanaya herself). This sounds pretty basic, and must be kept at that - if you want to know what someone gains by being anonymous and by romancing Vivan, you're convoluting the logic and adding more sentences for the managers to work out and for the readers of fullhyd.com to read.

Vivan either doesn't love Shanaya or is in denial about his love for her - even our sources close enough to his face couldn't tell us that from his expressions. But somehow, to let the Mirchi guys have their way, Vivan lands in a situation in which he and Shanaya must pretend to her parents that they're a couple. Adding to the soup is Pooja (Sonal Sehgal), Vivan's ex-wife - she shows signs of wanting to get back with him.

The greedy station now wants the drama on the airwaves to be concluded on TV, and Shanaya and Vivan get officially hooked up in front of the entire nation, despite Vivan's clear refusal to be involved. Now Shanaya decides that if she really loves someone, she should just let him go. The audiences would have loved Shanaya for this cue for the exit, but for the fact that they'd left about an hour ago.

Radio's narrative is in the form a dozen chapters in Vivan's recent life, and the language is pretty uncomplicated - quite blogger-esque. Where it goofs up is just that - it's like a blog, with not much for you to take home from it.

And, some of the dialogues and situations are corny. For example, there's a scene in which the trio, for the heck of it, break crockery at a restaurant and make other guests do it as well. The best actors during that scene are the pieces of crockery - and the members of the audience, for having acted like they were awake.

Himesh Reshammiya lays on more of the corn with his deadpan intensity. He has good screen presence, though. Shenaz rushes from grating to cute, and all the way back. Sonal Sehgal looks like she's the most matured of the lot. Paresh Rawal, in his very brief role, is much less funnier than all the dialogues put together. The supporting cast involves a few interesting performances.

The movie has been shot quite slickly, and the music isn't too bad, either. Mann Ka Radio might haunt your nights for a few days (and make you forget your grammar as well), but some of the songs are really good.

It's campy, it's funny, and it's quick. It will surely hit the TV screens soon, so save your laughs for something else.
Share. Save. Connect.
Tweet
RADIO - LOVE ON... SNAPSHOT
RADIO - LOVE ON AIR SNAPSHOT

ADVERTISEMENT
This page was tagged for
Radio - love on air movie Download
radio love on air hindi movie wapwonlive
radio - love on air full movie download
download full movie radio love on air
Radio - Love On Air hindi movie
Follow @fullhyderabad
Follow fullhyd.com on
About Hyderabad
The Hyderabad Community
Improve fullhyd.com
More
Our Other Local Guides
Our other sites
© Copyright 1999-2009 LRR Technologies (Hyderabad), Pvt Ltd. All rights reserved. fullhyd, fullhyderabad, Welcome To The Neighbourhood are trademarks of LRR Technologies (Hyderabad) Pvt Ltd. The textual, graphic, audio and audiovisual material in this site is protected by copyright law. You may not copy, distribute, or use this material except as necessary for your personal, non-commercial use. Any trademarks are the properties of their respective owners. More on Hyderabad, India. Jobs in Hyderabad.